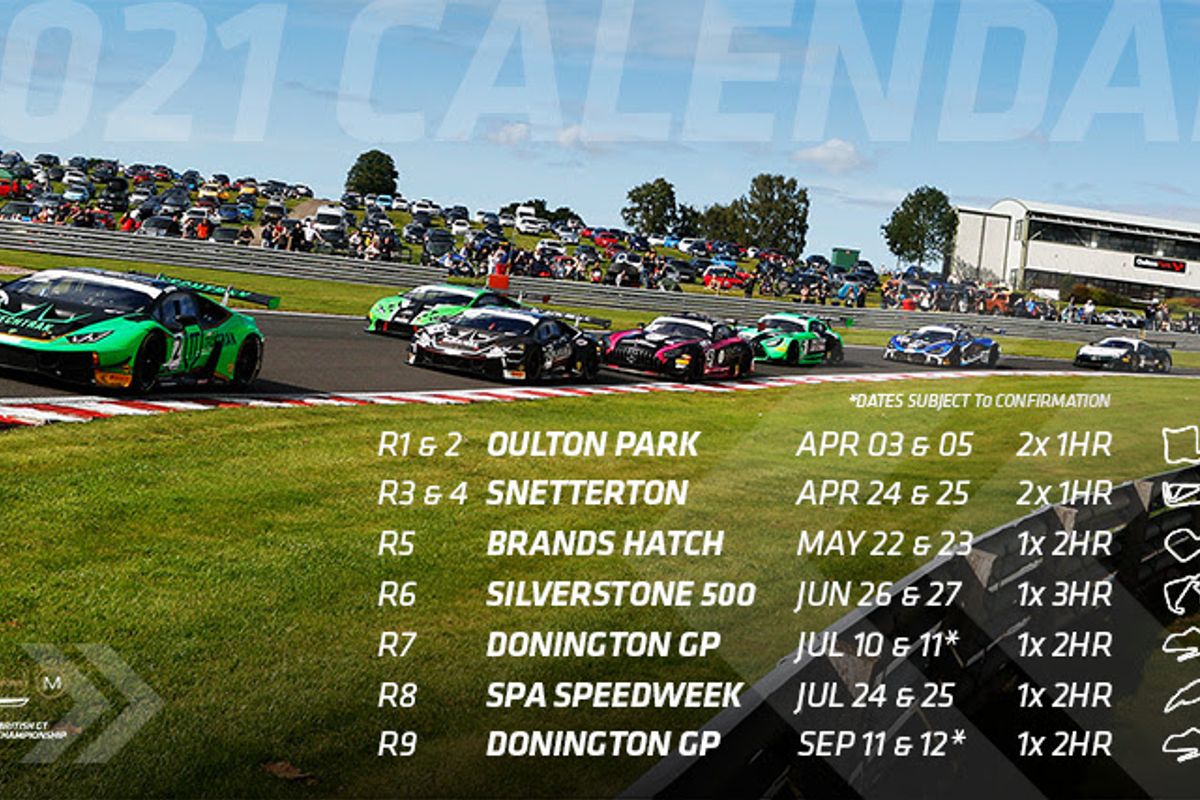 The Intelligent Money British GT Championship will revert back to a seven-event calendar in 2021 with nine races scheduled to take place at six circuits between April and September. Series organiser, SRO Motorsports Group, has also altered GT3’s class structure where a new Silver-Am category replaces the current Silver Cup.

2021 CALENDAR
Following a season like no other British GT will revert back to a seven-event, nine-race schedule in 2021.

The campaign begins in traditional fashion over Easter Weekend at Oulton Park, which hosts two 60-minute races on Bank Holiday Monday. The same sprint format returns three weeks later at Snetterton before Brands Hatch – which moves from August to May – stages the season’s first endurance race.

Next up is the blue riband Silverstone 500, which has been pushed back two weeks to avoid clashing with the Le Mans 24 Hours, before Donington Park hosts the first of its two rounds.

Spa-Francorchamps then makes a welcome return to the schedule one week before several teams and drivers remain in Belgium to contest the Total 24 Hours of Spa. An uninterrupted summer break will allow personnel to recover throughout August before #DoningtonDecider returns to its rightful season finale slot in mid-September.

Avoiding clashes with all rounds of GT World Challenge Europe Powered by AWS and the GT4 European Series provides teams and drivers with an opportunity to contest multiple SRO Motorsports Group championships if they so wish.

CLASS STRUCTURE
For more than a decade British GT’s senior GT3 class has prospered thanks to a predominantly Pro-Am entry. Now, following an unusual season in which a combination of factors have allowed Silver Cup entries to flourish, championship organisers have acted to redress the balance while maintaining a viable environment for young, would-be professionals to develop and prosper.

In 2021 driver line-ups comprising two FIA Silver-graded drivers will no longer be permitted to race in British GT3. Instead, a Silver-Am class – first trialled in 2016 – will be added to the existing Pro-Am and Am-Am classifications.

Variables within the FIA’s grading criteria mean not all Silver drivers automatically qualify for British GT’s Silver-Am classification. Instead, the Silver element will typically comprise promising but less experienced young drivers, GT4 graduates or those likely to contribute some budget when paired with a Bronze-graded amateur.

Silver-Am entries will also score points towards British GT3’s Overall and Pro-Am championships where they can measure themselves against crews led by established Silver, Gold and Platinum-graded professionals or factory drivers.

A dedicated Silver-Am podium presentation will take place following each race, while further class-specific incentives are currently under review.

No such changes are planned for the GT4 class, which retains its Pro-Am, Silver Cup and Am Cup categories. However, there will be a renewed focus on incentivising Pro-Am pairings to return to the class following an organic shift towards Silver Cup entries over the last three years.

2020’S NOT OVER YET!
This year’s Intelligent Money British GT Championship titles will be decided at the #SilverstoneShowdown on November 7/8 when organisers expect to assemble the largest entry of the season. Indeed, several new GT3, GT4 and GTC entries will be announced in the coming weeks.