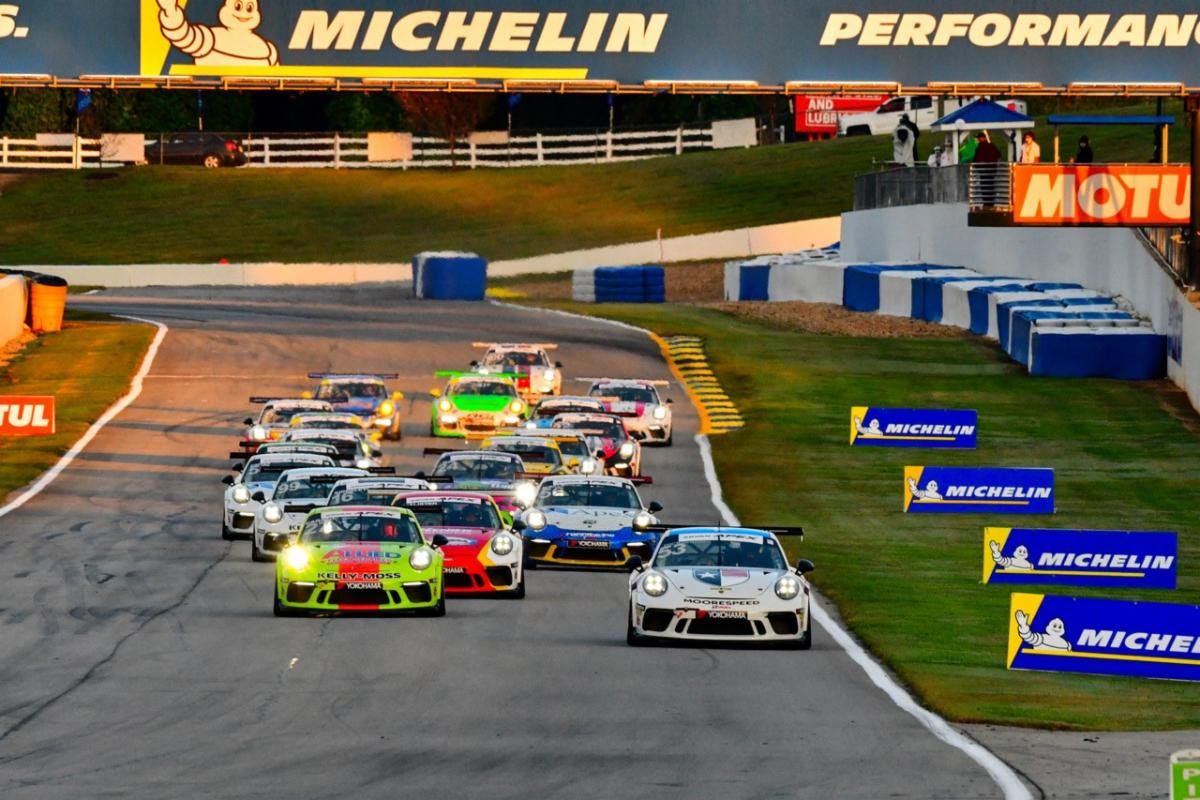 Riley Dickinson saw his championship hopes directly in his mirror and didn’t blink. The Texan held off Jeff Kingsley on a pair of late restarts to win this morning’s first race of a Porsche GT3 Cup Challenge USA by Yokohama tripleheader at Michelin Raceway Road Atlanta.

Starting from the pole position in the No. 53 Moorespeed Porsche 911 GT3 Cup machine, Dickinson built a comfortable lead in the first half of the 45-minute race. Kingsley, meanwhile, quickly maneuvered his No. 16 Kelly-Moss Road and Race Porsche from fourth to second. Dickinson maintained a lead of about three seconds until two full-course cautions in the final 22 minutes bunched the field behind the pace car.

﻿Dickinson held strong on both restarts with Kingsley directly on his bumper and prevailed by 0.435 seconds for his third win of the 2020 season.

“I feel like it was a great race on my end and Moorespeed’s as well,” Dickinson said. “They delivered me a great car once again. I put in the best performance I could. Ultimately, with a couple late-race cautions, it definitely tested it a little bit, but at the end of the day, we got it done. We have two more left in the weekend and we’ll just keep on focusing on those.”

Sebastian Carazo, Kingsley’s Kelly-Moss teammate in the No. 27 Porsche, completed a successful pass on Sean McAlister (No. 11 JDX Racing Porsche) on the final restart to finish third.

With the victory, Dickinson trimmed his deficit to Kingsley to 19 points in the GT3 Cup Challenge Platinum Cup class standings for current-generation 911 models. With two races remaining this weekend at Michelin Raceway and six total the rest of the season, he retains championship hopes.

“All the races are important in the entire season,” Dickinson said. “We had a little bit of struggles earlier in the year, but right now, it’s just focusing on what we’ve got to do. Whatever happens with anyone else, that’s up to them. We’ve got to focus on what we’re doing.”

In the Platinum Masters class for drivers at least 45 years of age, Charlie Luck collected his first win of the season in the No. 45 Wright Motorsports Porsche, holding off runaway points leader Alan Metni in the No. 99 Kelly-Moss AM Motorsports entry by 0.789 seconds. Metni had won eight of the first nine races this season.

“I can’t tell you how happy I am,” Luck said. “It’s been a long spell, and Alan’s done such a good job with his development and we’ve been working so hard. Damn, it feels so good! That was just super racing.

“You know, that’s what we come to do. We come to push each other hard, race clean and get the job done. It’s just so rewarding when all that comes together, so I just couldn’t be more thrilled for the whole team and for everybody that’s a part of this. It’s just, so, so sweet.”

In the Gold Cup class for 911 GT3 Cup cars built between 2014 and 2016, honors went to Efrin Castro, whose No. 65 TPC Racing Porsche crossed the finish line 0.781 seconds ahead of Curt Swearingin in the No. 17 ACI Motorsports entry. It was Castro’s fourth class win of the season and moved him within 10 points of Swearingin atop the Gold standings.

Joseph Lombardo, driver of the No. 92 Wright Motorsports Porsche, earned the Yokohama Hard Charger Award. The race was also memorable for David Baker, who made his 99th career GT3 Cup Challenge start this morning and will make his 100th this afternoon in the aptly numbered No. 100 Topp Racing Porsche.