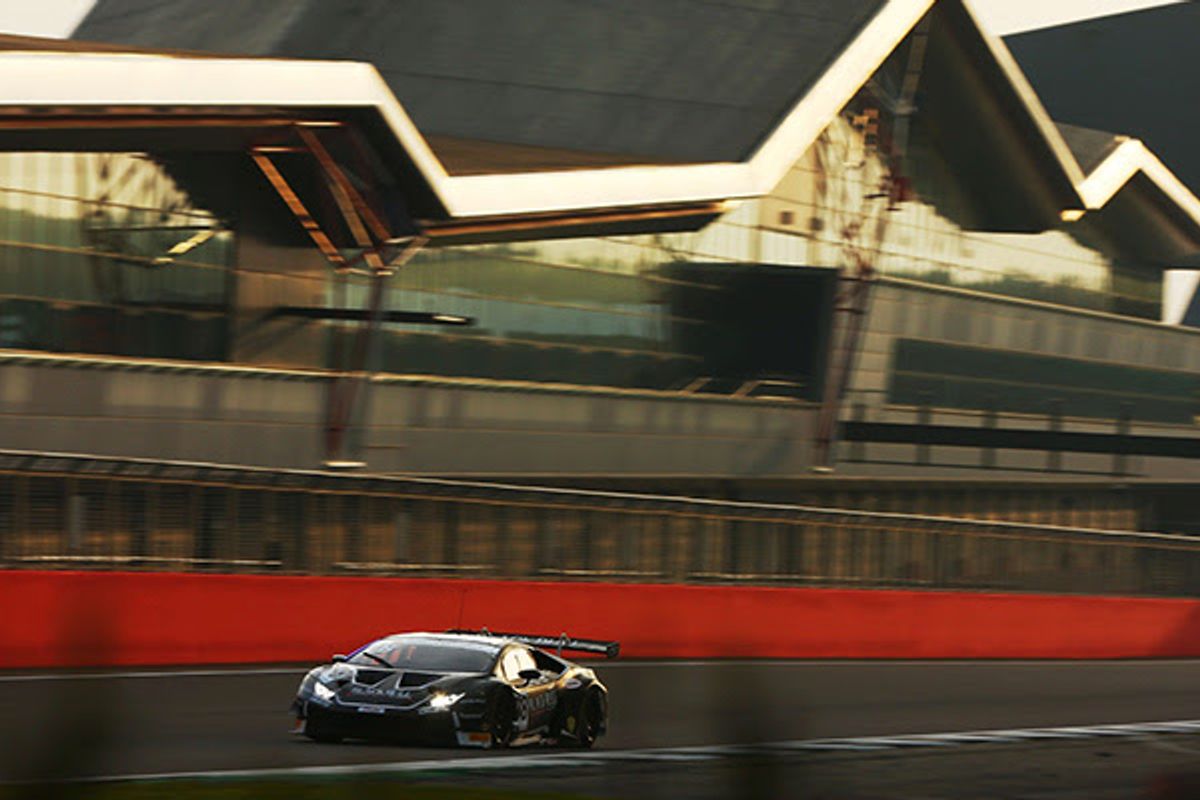 Kell and Smelt on top in GT4

Jamie Caroline and Dan Vaughan (TF Sport) were pipped to GT4 pole by Smelt’s late flying lap but will be content to start on the front row after seeing their main title rivals – Patrick Kibble/Connor O’Brien and Jordan Collard/Patrik Matthiesen – struggle en route to sixth and seventh, respectively.

Sunday’s #SilverstoneShowdown looks set to be a classic even by British GT’s standards after Sandy Mitchell and Rob Collard put themselves in prime position to overhaul championship leaders Patrick Kujala and Sam De Haan by qualifying on pole position.

Unlike its prime title target, Barwell’s #78 Lamborghini has no Success Penalty to serve during the three-hour race, which gets underway at 12:50 GMT.

Collard, who’d never driven Silverstone’s full GP circuit despite a two-decade BTCC career, set the tone by immediately jumping to the top of Q1’s times. His first effort was then beaten by both James Baldwin and Lewis Proctor before another quick lap restored the Lamborghini’s provisional pole position.

Baldwin managed to reduce his arrears to 0.274s before the chequered flag flew, but the damage was done and Barwell’s advantage would only increase from there.

The rest of the top-eight were initially also within a second of Collard’s 1m58.499s Q1 benchmark.

Meanwhile, RAM’s championship-leading Mercedes-AMG headed into the second 10-minute qualifying segment 0.935s down on Barwell. But while it was a gap that couldn’t be overcome, Patrick Kujala – along with several other Pros – were able to make up places.

Indeed, Phil Keen’s new GT3 qualifying lap record – 1m57.162s – helped the car he shares with Balon vault from 16th to fifth in the combined times and on to the tails of the other championship contenders.

The #72 Lamborghini starts right behind Jenson Team Rocket RJN’s McLaren crewed by Baldwin and Michael O’Brien, which ended up 0.8s shy of combined pole in fourth. They share the second row with De Haan and Kujala whose third-fastest Q2 time brought the points’ leaders back into the thick of the fight.

But there was no denying Collard and Mitchell. The latter was a little below his recent best en route to seventh in the Pro session but still sufficiently quick to extend the pole advantage to 0.6s over RAM’s Loggie and Yelmer Buurman who vaulted the leading Pro-Am entry from sixth to second overall – a position that could ultimately prove decisive in the pair’s tight class battle with Balon and Keen.

Optimum’s Proctor and Ollie Wilkinson start sixth ahead of Michael Igoe and Andrea Caldarelli, who moved WPI’s Lamborghini up the order in the second session. Charlie Eastwood set second fastest time – two tenths down on Keen – to help Beechdean AMR’s returning Aston Martin round out the top-eight ahead of Balfe/Bell (Balfe Motorsport) and Petrobelli/Canning (TF Sport).

Sam Smelt and James Kell backed up their strong practice pace by stealing a last-gasp GT4 pole for Speedworks and Toyota.

Just when it looked settled that TF Sport’s pairing of Daniel Vaughan and Jamie Caroline had done enough to secure top spot, a last-gasp dash to the flag from Smelt proved just enough to move the Toyota ahead on combined times by a tenth of a second.

Kell set the pace for much of the Am session but was deposed late on by the returning James Dorlin – a GT4 race winner at Spa last year – in the MSL Powered by Newbridge Motorsport Aston Martin. Kell almost staged a late comeback of his own, setting the fastest first sector time of the session on his final run, but failed to improve across the rest of the lap and had to settle for second by just 0.052s.

Dan Vaughan was just 0.173s down on this battle, and when Caroline pumped in a 2m10.026s early in the Pro session to overturn the deficit and put the car top, things looked done and dusted. But Smelt had a chance for one final lap and managed to shade Caroline’s time to snatch the place at the flag.

Matt Cowley built on a solid opening session from Will Moore to move the Academy Motorsport Ford Mustang up to a fine third, while Alex Toth-Jones and Dorlin will start fourth.

Chris Wesemael enjoyed a strong run in Q2 to move the HHC McLaren he shares with Gus Bowers up to fifth on aggregate times, just ahead of Connor O’Brien and Patrick Kibble’s TF Aston.

Patrik Matthiesen and Jordan Collard will start their HHC McLaren from seventh, ahead of Team Parker’s class returnees Nick Jones and Scott Malvern whose Pro-Am pole was aided by the latter’s fastest-ever GT4 lap around Silverstone: 2m09.939s.

Khera hit the front right from the start in the Ferrari 488 Challenge and steadily lowered his benchmark to hand the car across to Pro driver Wylie for the second element of the session with a 0.3s advantage. Wylie then did enough to double that gap on his run, securing pole for tomorrow’s three-hour showdown. The team’s third driver, Lee Frost, will join the duo for the race.

Phil Quaife did enough to elevate the Scott Sport Ferrari he shares with John Dhillon to second on the grid, ahead of the FF Corse-run 488 of Laurent de Meeus and Jamie Stanley.

Karl Leonard and Tim Bridgman line up fourth in the first of the Porsche Carrera Cup cars in their Team Parker Racing-run entry. Justin Armstrong and Ryan Ratcliffe will start fifth.

PITSTOP SPECIFICS – SILVERSTONE 500
There are no pitstop windows. Instead, at least three driver changes must take place while no driver may exceed 100 minutes of drive time. Success Penalties must be served during the final mandatory stop.

In crews comprising three drivers each individual must race for at least 40 minutes while not exceeding 100 minutes. The driver nominated to complete two of the four stints must be one of the crew’s lowest graded drivers. This individual will be nominated after qualifying.

All GT4 Silver Cup entries must serve an additional 14s during their mandatory driver changes.

All GT4 Silver Cup entries must serve an additional 14s during their mandatory driver changes.