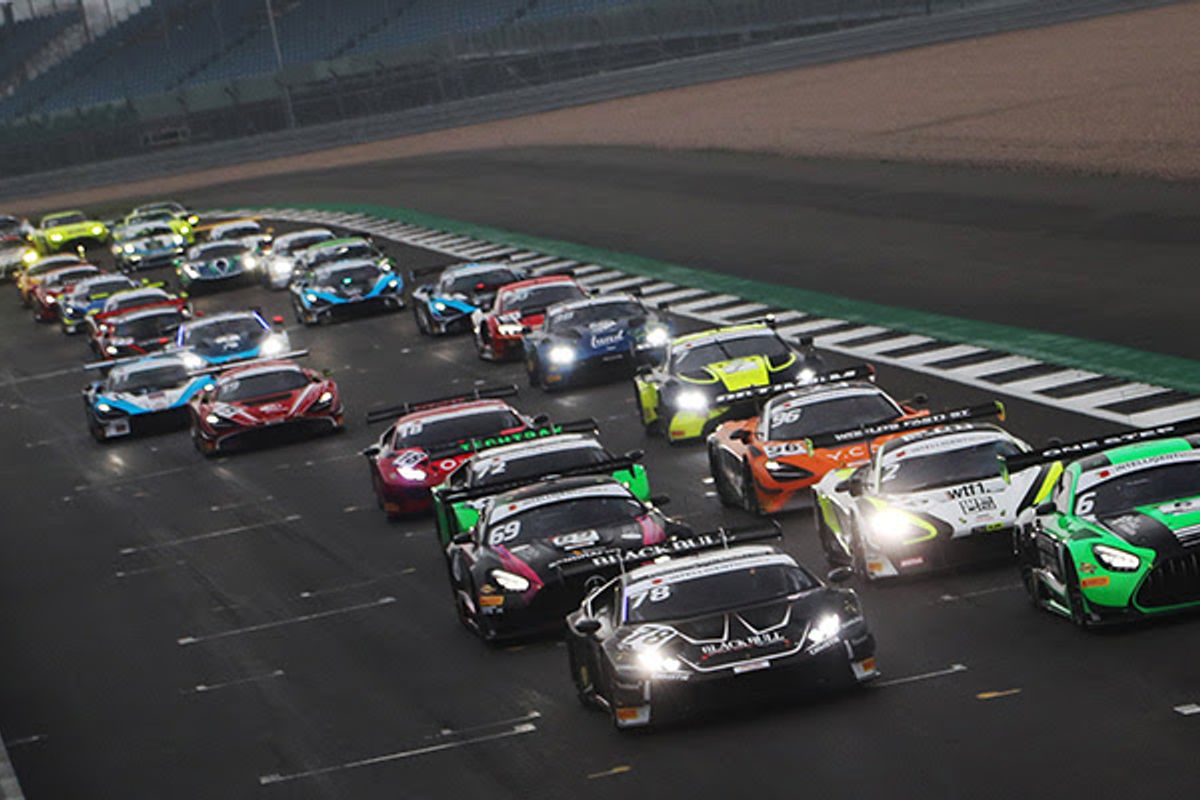 Rob Collard and Sandy Mitchell are the new Intelligent Money British GT3 champions after Barwell Motorsport’s #78 Lamborghini claimed a second victory of the season at the blue riband Silverstone 500 Sunday.

GT3: COLLARD AND MITCHELL SAVE THEIR BEST 'TIL LAST

Of course, British GT rounds – and especially ones lasting three hours – are seldom straightforward. But on this occasion, and to the relief of a Barwell Motorsport team so often the bridesmaids in the title decider, the Black Bull-backed Huracan never looked troubled en route to a comfortable victory.

Collard led away from pole but pitted immediately – along with team-mate Adam Balon – when a Safety Car was called at the end of lap two. By contrast, their main title rivals were forced to complete another lap due to the slightly thirstier Mercedes-AMG, which would have required an extra late pitstop had it shadowed Barwell’s Lamborghinis.

Mitchell thus led Phil Keen when the caution period ended, although Barwell wasted little time swapping its Huracans around in the hope that the #72 title contender could negate some of its looming 20s Success Penalty.

Instead, the race settled down with Buurman now running third ahead of a charging Ollie Millroy (Optimum McLaren), Kujala and Andrea Caldarelli (WPI Motorsport).

RAM’s Mercedes-AMG was sufficiently quick to jump from third to first after the second round of pitstops. Collard also passed Balon – who’d taken over from Keen several laps earlier – during the driver changes and was soon on Ian Loggie’s tail. The pair circulated together for half the stint until the highs and lows of motorsport struck Barwell at almost the same moment.

First, Balon – who was now fifth after being passed by Brendan Iribe and Lewis Proctor – was tapped around at Stowe by De Haan whose subsequent 10s stop-go penalty effectively ended RAM’s hopes of winning the title. Indeed, the penalty was compounded by Collard relieving Loggie of the lead at almost the same moment.

Neither could capitalise on the opportunity, though. Optimum’s hopes ended when Wilkinson spun after making contact with Loggie, and Mitchell emerged from his final pitstop just ahead of O’Brien who couldn’t match the Lamborghini’s pace. Instead, the Scot powered clear to a comfortable, unflustered victory and the 2020 GT3 crown.

Behind, O’Brien ultimately lost out to Buurman who mounted a charge after taking over from Loggie. Second overall and Balon/Keen’s travails handed RAM’s #6 crew the Pro-Am title after coming into the weekend just one point behind.

WPI’s Lamborghini rounded out the top-six despite Michael Igoe and Caldarelli serving a 15s Success Penalty at their final pitstop. Without it, they would have been fourth.

Optimum’s #77 McLaren won plenty of admirers for its swashbuckling performance and looked on course for the podium until two setbacks – Iribe’s heart-stopping off-track moment at Village and a late Control-Alt-Delete for Millroy – condemned it to seventh.

Steller’s Audi shared by Sennan Fielding and Richard Williams rounded out the top-10.

Ryan Ratcliffe and Justin Armstrong came out on top of the GTC fight when their Team Parker Racing-run Porsche successfully completed the three hours relatively unscathed compared to its class rivals.

Having played second fiddle to the trio of Ferrari 488 Challenge cars, the Porsche came good in the race and benefited when many of its Italian rivals hit trouble.

During a messy start to the race, John Dhillon emerged as the early class leader in the Scott Sport Ferrari he shared with Phil Quaife and would play a key role in what would become a two-horse race in the final hour.

Lucky Khera/Lee Frost/Ross Wylie’s Simon Green Motorsport Ferrari was looking set to be part of the fight also, before it was forced into a lengthy pitstop after sustaining damage, which would leave the car a distant fourth at the flag.

Likewise the Porsche numbers were slimmed when the Karl Leonard/Tim Bridgman entry picked up a stop-go penalty after a lap-one clash that left the car stuck in the gravel for some time.

Laurent De Meeus/Jamie Stanley’s FF Corse Ferrari avoided much of the early chaos, and even enjoyed a brief spell in the lead behind the Safety Car, but lost time when De Meeus was spun around soon after the restart.

That left the Armstrong/Ratcliffe Porsche and Dhillon/Quaife Ferrari as the two contenders for victory and the cars shuffled the lead between the pitstops. However, when Dhillon sustained damage in a clash during the final hour and had to limp back to the pits for repairs, it left Armstrong/Ratcliffe well clear of De Meeus/Stanley as Dhillon/Quaife recovered to compete the podium.

Century Motorsport called its strategy perfectly to secure a victory few would have predicted at the start of the weekend as Andrew Gordon-Colebrooke and Rob Wheldon produced the perfect race to claim the glory. However, it was TF Sport’s Aston Martin crew of Dan Vaughan and Jamie Caroline who celebrated becoming GT4 champions after a stunning fightback from a pitstop penalty.

Heading into the season finale, any one of five crews could seal the title in an ultra-tight GT4 contest, and the destination of the crown duly swung a number of ways before only being decided in the closing minutes.

A turbulent opening half-hour kept everybody guessing and presented Century with its chance to strike. When the Safety Car was called at the end of the first lap, TF Sport took the chance to pit both of its Astons early to get one of its stops out of the way while the race was at reduced speed. It’s a tactic that has worked well in the past but one that was scuppered by both cars collecting stop-go penalties.

That left TF on the back foot, and both cars would run in formation for the remainder of the race, chipping away at the deficit with each stint.

In contrast, Century opted to keep Wheldon out until much later in the Safety Car period before pitting him, thus finding a window where the BMW M4 could be serviced, Gordon-Colebrooke installed, and re-join before the Safety Car could complete the next lap.

It worked perfectly, and Gordon-Colebrooke came back into the race with a near half-lap advantage, even if it wasn’t immediately apparent.

James Dorlin and Alex Toth-Jones stole much of the limelight early on, with Dorlin not pitting at all during the caution and thus holding a lead of around 1m40s for most of the race. When he finally did stop to hand to Toth-Jones after 28 laps, the car was so far out of sync with the rest of the field that it enjoyed a huge advantage after each pit cycle. However, the two long opening stints meant the MSL Powered by Newbridge Motorsport Aston would have to serve its last two stops within the final hour, and with no Safety Car it dropped the duo out of contention.

All the time Gordon-Colebrooke/Wheldon flew under the radar to emerge with a half-minute lead when the order worked through in the final hour, and from then the hard work was done.

But behind the winner the title battle exploded into life. Jordan Collard had made superb early progress to catapult the HHC McLaren he shares with Patrik Matthiesen into the championship hot seat to run second as the race entered its closing stages. But the duo of TF Astons weren’t far behind.

Caroline took over from Vaughan for a rapid final stint, followed closely by Kibble in the sister car, and Matthiesen could do nothing to deny the two flying Vantages, which both passed him inside the final minutes.

Second place was enough to put the title beyond doubt for Caroline and Vaughan.

Charlie Hollings/Lars Dahmann were eighth ahead of the troubled Speedworks Toyota of James Kell/Sam Smelt, which lost a heap of time early on after sustaining door damage in a clash with the Academy Motorsport Ford Mustang, which was then compounded by a stop-go penalty for a pit infringement when fixing the issue. Smelt at least set Sunoco fastest lap en route to ninth ahead of the Will Moore/Matt Cowley Mustang, which had to stop for suspension repairs.

All of that also allowed TF Sport to retain its Teams’ crown ahead of HHC Motorsport, while Caroline and Vaughan added the Silver Cup championship to their Overall class success. Balfe Motorsport’s Mia Flewitt and Euan Hankey were early retirees today but had already won the Pro-Am title.