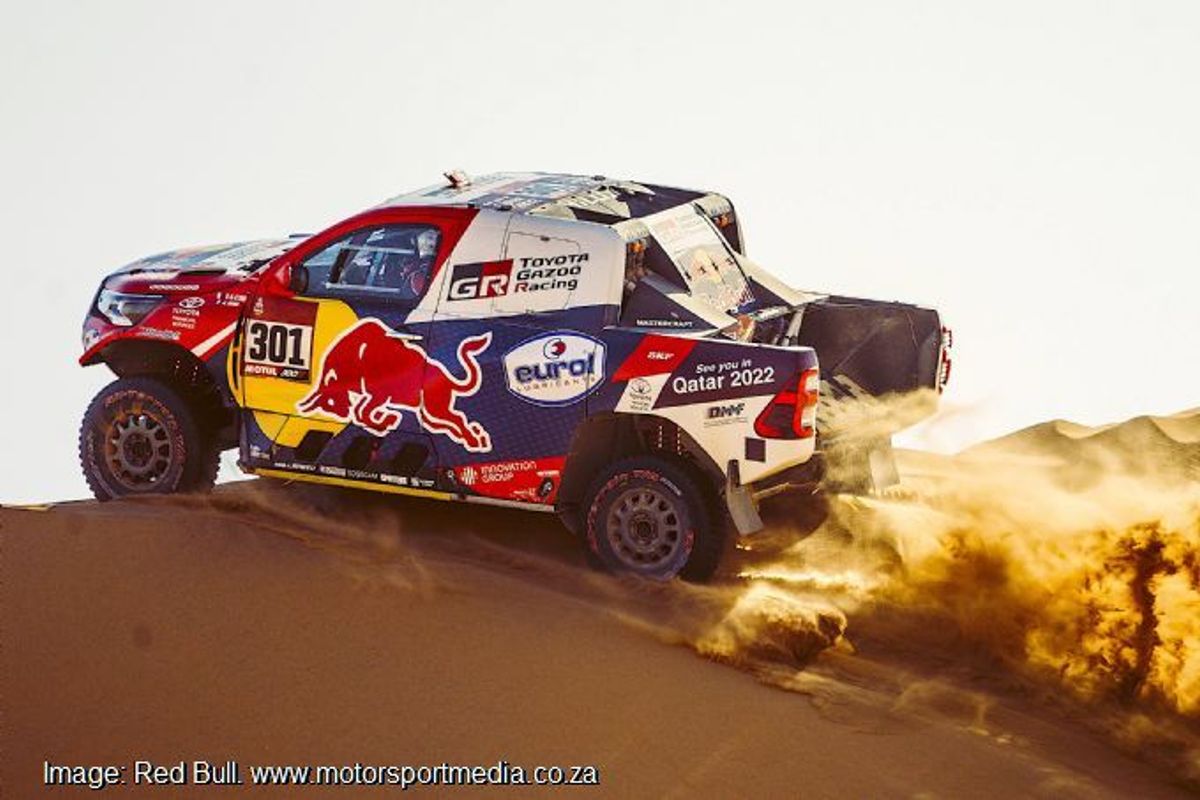 A new Dakar star was born in the Arabian desert dunes, when South African rookie Henk Lategan delivered a masterful performance to follow teammate Nasser Al Attiyah home to a crushing Toyota Gazoo Hilux 1-2 around Wadi Ad-Dawasir Tuesday. There was drama again on two wheels as that race continued to penalise riders who starred on the previous day. Toby Price’s KTM beat Kevin Benavides on Honda as both rose from well down the pack, while Monday's leaders again suffered.

The Toyota duo dominated the day on four wheels. Lategan and notes man Brett Cummings led early on, before first Carlos Sainz’ Mini and then Attiyah took over up front on day 3 of the 2021 race. Double SA champion, but Dakar rookie Lategan later held Stephane Peterhansel’s Mini and Sebastien Loeb’s Hunter at bay in second. Peterhansel ended up third for the day from Yazir Seadian’s SA-made Century and Shehikh Al Qassimi’s Peugeot. Loeb ended up fifth ahead of Martin Prokop's Ford and Mattieu Serradori’s Century.

There was ample drama in the cars too, as overnight leader Sainz, fourth placed Yazeed Al Rajhi and SA heroes Brian Baragwanath and Taye Perry’s Century in seventh, struggled to find their way in the dunes at mid distance. All of them plummeted down the order, losing time trying to find the correct route. Of the other SA crews, Giniel de Villiers suffered another torrid day as we wrote and Shameer Variyawa and Dean Murphy were fighting through the field after Monday’s delays.

By winning, Al Attiyah moved to second overall as he clawed his deficit to overall leader Peterhansel back to just five minutes. Those two have broken away up front. Serradori has now moved into an incredible lead driving his Johannesburg-built  Century, albeit over 25 minutes off he lead with Sainz now fourth ahead of Jakub Przygonski’s Hilux, Loeb and Lategan.

The day was however once again a disaster for the first four riders away. Overnight leaders Joan Barreda, his Honda teammate Ricky Brabec, Husqvarna rider Pablo Quintanilla and Botswana Yamaha hero Ross Branch all lost huge time in the first sector. They came home 30th, 25th 23rd and 17th respectively. It was the third day in three where the bike frontrunners have been severely compromised in finding their way and lost considerable time, very early in the day.

Those inconsistent results have also completely shaken up the leaderboard. KTM privateer Skyler Howes, who has quietly got on with it on the verges of the top ten  with 13th, 8th and 11th place finishes each day, now leads the bike race overall against all odds. Benavides, de Soultrait , Price, Sunderland, Branch, Barreda and Yamaha rider van Beveren complete to top eight. They have either starred or struggled each day, seemingly penalised by strong performances on the eve.

Another remarkable aspect of all this, is that in spite of the radical changes of fortune across the front running field each day, the top ten were separated by less than ten minutes at he end of Day 3. That has also led to speculation of a ‘Hand of God’ element in a race that has so far packed in all the components of a fiction thriller…