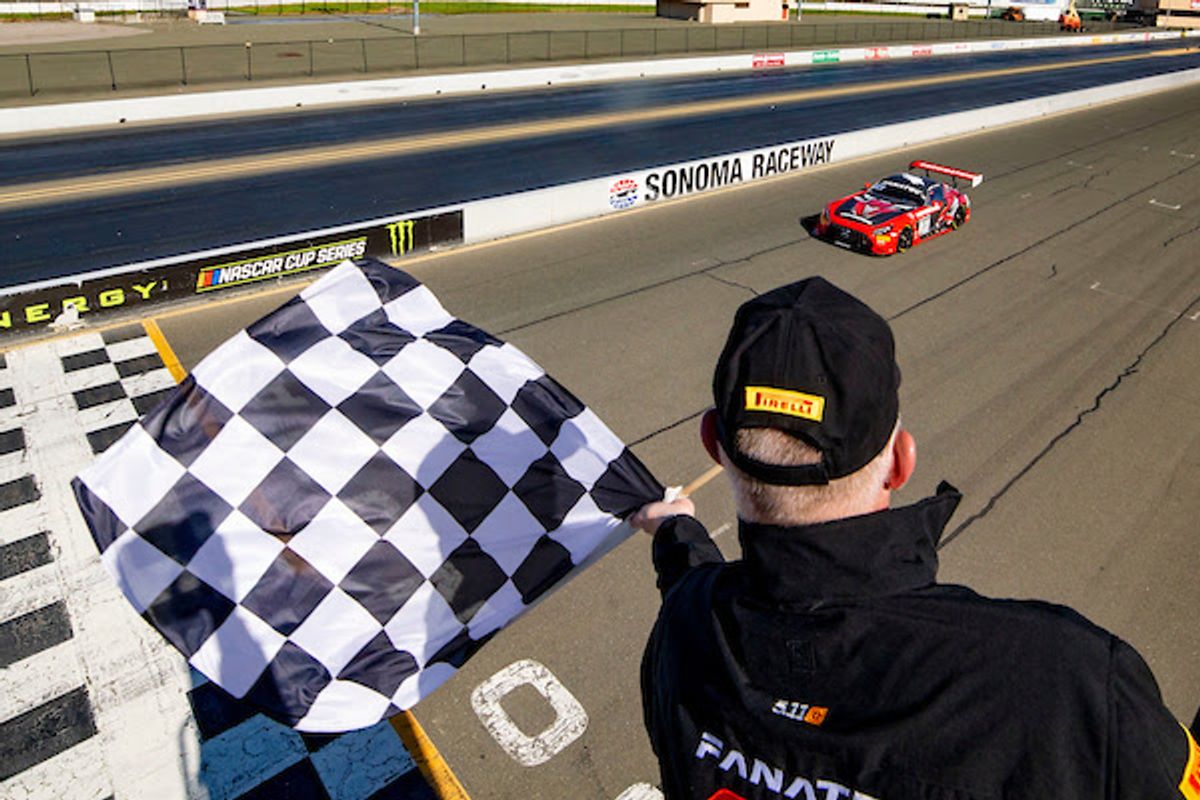 Starting from the pole for the second-straight day, Kurtz built a comfortable lead on the GT America field from the drop of the green flag in Sunday’s second and final 40-minute race of the weekend.

Avoiding the penalty drama that nearly derailed his Saturday win, Kurtz had an uneventful run to his second straight GT America victory on the debut weekend of competition for the new racing series. A late restart erased a comfortable lead on the field, but Kurtz held the competition off and crossed the finish line with a 1.649-second margin of victory.

In Sunday’s 90-minute Fanatec GT World Challenge finale, Braun picked up the race-leading momentum right where Kurtz left off in the GT America race.
Starting from the outside front row in the No. 04, Braun jumped to the overall lead at the race start and stayed up front for every lap of his race-opening stint.

While a pair of all-Pro competitors moved to first and second overall during mid-race pit stops, Braun handed the No. 04 off to Kurtz who extended the Pro-Am class lead straight to the checkered flag. The No. 04 duo won the Pro-Am class and finished third overall.

The debuting DXDT duo of Erin Vogel and Michael Cooper rebounded from a frustrating race Saturday to secure a fourth-place Pro-Am finish Sunday in the No. 19 DXDT Racing Mercedes-AMG GT3.

Closing driver Vogel held off a persistent and close challenge from Russell Ward in the No. 33 Winward Racing Mercedes-AMG GT3 in the race’s final minutes. Ward and co-driver Philip Ellis ended up reaching the all-Pro podium with a third-place class finish.

Starting driver Szymczak stayed in close touch with the other leaders in his race opening stint before handing the No. 72 off to Murillo at half distance.

The Murillo Racing team executed a fast and mistake-free pit stop that put the No. 72 back into the race in the top five. Murillo began a steady climb to the front, taking the Silver-class lead with 15 minutes remaining and then breaking into the overall top three.

Murillo moved to second overall in the race’s closing minutes and was closing on the overall race leader as time ran out. Murillo took the checkered flag just 2.370 seconds behind the race winner to seal the second-place overall finish and Silver victory.

In the Pirelli GT4 America Am class, John Allen and Kris Wilson co-drove the No. 16 Capstone Motorsports Mercedes-AMG GT4 to a second-place class finish Sunday for the second straight day. The pair of weekend runner-up showings have moved Allen’s and Wilson’s championship pursuit off to a strong start with the new and debuting Capstone Motorsports team.

George Kurtz, Driver – No. 04 DXDT Racing Mercedes-AMG GT3: “It feels great. Our Mercedes-AMG GT4 cars were great, and the DXDT Racing team did a good job of getting the cars ready for today. We just put the effort in. We had the pace. We prepared in the off season and everyone did a great job. In the GT World Challenge race, Colin just took it from the top and put me in a great spot to succeed.”

Colin Braun, Driver – No. 04 DXDT Racing Mercedes-AMG GT3: “It’s great. On the whole, I’m really proud of the DXDT Racing guys. They had a lot of ups and downs this weekend and certainly they just kept working and working. We had a fast Mercedes-AMG GT3 all along. The GT America side of things went super smooth. George crushed the whole weekend over there. Today, there was good pace from both No. 04 cars. I got a good start and we got George in there and he pulled out a big lead. Life was pretty good! I’m just really happy!”

Erin Vogel, Driver – No. 19 DXDT Racing Mercedes-AMG GT3: “I spent the last couple of laps fighting off the other Mercedes-AMG GT3, who put up a really great fight. It was really fun to race with them. I was able to just hold them off for a photo finish and come in fourth place, which we’re happy with for just our second race of the year.”

Russell Ward, Driver – No. 33 Winward Racing Mercedes-AMG GT3: “It’s good to be back in California. I love Sonoma Raceway, it’s one of my favorite tracks. I think the Mercedes-AMG GT3 is pretty good here. Unfortunately, we couldn’t really do anything against the Pro-class winners, but congratulations to them. I’m really looking forward to the next race, which is at Circuit of The Americas. It’s kind of a home track for me. The Mercedes-AMG GT3 is also really, really strong there.”

Kenny Murillo, Driver – No. 72 Murillo Racing Mercedes-AMG GT4: “It’s really no surprise because we worked exactly for this result, and I’m just so happy to bring it to Murillo Racing. They totally kicked it all weekend. I knew we were going to be quick in the end. Christian handed over a great car and things were just coming to us. All we had to do was focus, hit my marks and stick to the plan. I came across the line and they were like, ‘you’re P2 overall.’ That’s pretty cool! We are just grateful to not only have a Mercedes-AMG GT4 but also to be able to put it on the Pirelli tires. It is a match made in heaven. I can’t thank everybody enough. So thankful.”

Christian Szymczak, Driver – No. 72 Murillo Racing Mercedes-AMG GT4: “It wasn’t shaping up to be that great early on, but it turned out a lot better than I thought it would when I got out of the car. We put Kenny in the car and he turned some really, really good laps and was consistent. The race kind of came to us again. We managed to keep the Mercedes-AMG GT4 under us the entire time, which is kind of the theme with this car. We just waited for it to do its thing and eventually we ended up in a great spot.”

John Allen, Driver – No. 16 Capstone Motorsports Mercedes-AMG GT4: “It just feels great to get our new program, Capstone Motorsports, off to this kind of a start. Two podium finishes are just fantastic. The Mercedes-AMG GT4 is a fantastic car. We’re looking forward to being able to develop setups. We’ve got a pretty good setup for racing, but I think we’re really going to fine tune it for qualifying. If we can qualify a few steps up the field, it’ll really make a difference. We love the car.”

Kris Wilson, Driver – No. 16 Capstone Motorsports Mercedes-AMG GT4: “For a new team, two second place finishes is not a bad way to start. We’re on the podium and we have a good base for moving forward. We learned a lot of things this weekend. We have a really good race car with our Mercedes-AMG GT4 but need to work on our qualifying setup. Our race pace is great, but now we have to figure out the qualifying aspect of it.”

Next up for Mercedes-AMG Motorsport Customer Racing teams in the SRO America Championships is Circuit of The Americas (COTA), April 30 – May 2.