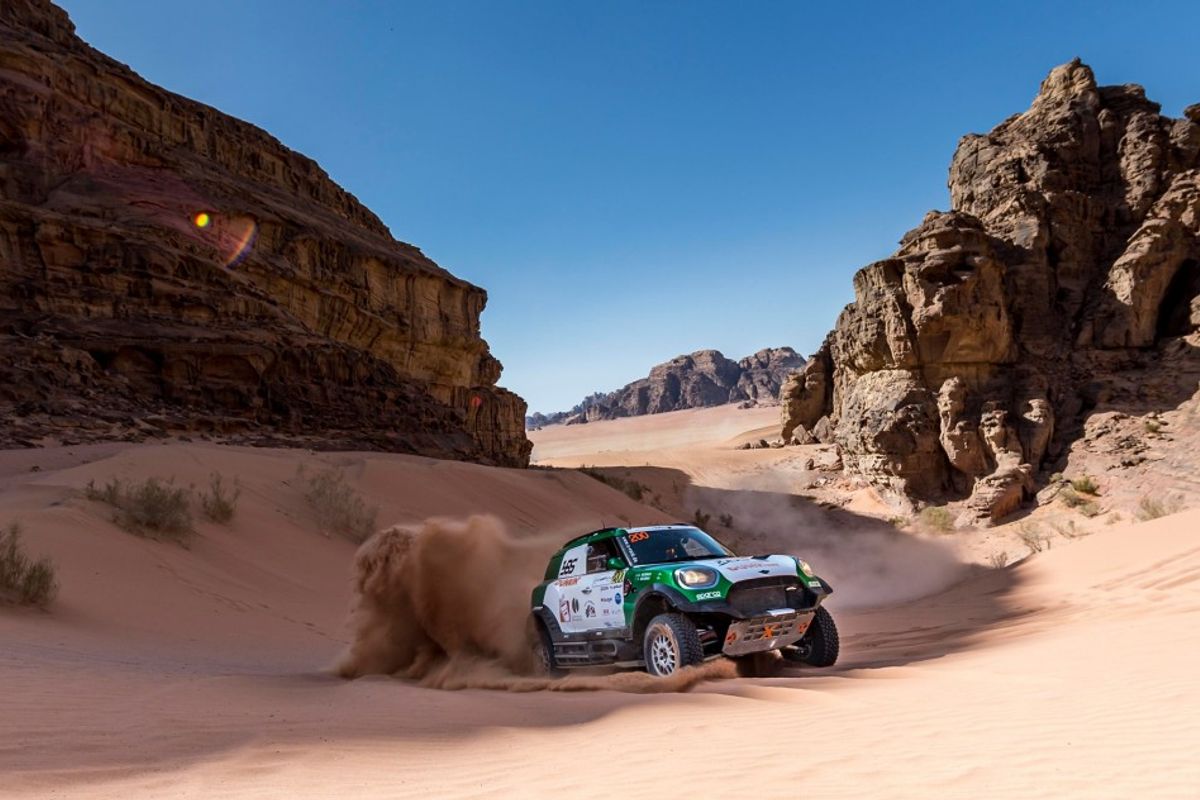 Jordan Baja, Round 4 of the FIA World Cup for Cross-Country Bajas

Yasir Seaidan and Alexey Kuzmich have significantly extended their lead in the FIA World Cup for Cross-Country Bajas after claiming victory on the Jordan Baja, the fourth round of the series. The MINI John Cooper Works Rally crew finished over five minutes ahead of Eric van Loon and Sébastien Delaunay with their Toyota team-mates, Ronan Chabot and Gilles Pillot, rounding out the podium placings.

Three selective sections in the spectacular southern desert of Wadi Rum lay in wait for the crews and it was a fascinating battle between Seaidan and van Loon from the outset. In the opening 210 kilometre section on Friday morning, Seaidan and Kuzmich finished second, just one minute and 27 seconds behind their rivals, a puncture dropping them time. They nevertheless bounced back in the shorter 112 kilometre afternoon stage, despite another puncture and tricky navigation, to take the win and claw back valuable time to overnight 26 seconds adrift. Today, in the decisive 235 kilometre section, the duo diced with van Loon throughout the section but romped to another stage victory with a calculated risk to run on a slow puncture for most of the section. “I am really happy for leading the series with two wins,” said the Saudi Arabian driver. “I hope I can keep it like this until we finish the Championship.”

Van Loon, navigated by Frenchman Delaunay, admitted to a few small mistakes that cost him time in the second section, and he struggled to set a faster pace today opening the road. The Dutchman was however delighted to finish on the podium. His team-mates, Chabot and Pillot, claimed third in the second Toyota Hilux Overdrive, some 16 minutes adrift of the lead. They too admitted navigation had been difficult but enjoyed a trouble-free run.

Behind the leading trio, Saleh Al-Saif finished fourth and also claimed a second consecutive victory in T4 with Spaniard Oriol Vidal alongside him in the Can Am Maverick. The Saudi collected two punctures yesterday, but overhauled Meshari Al-Thefiri in the second stage to take the category honours at the finish in Aqaba. Behind Kuwait’s Al-Thefiri, Thomas Bell finished third in another T4 Can Am Maverick. Frenchman Claude Fournier, who led the category going into the event, finished fourth of the contenders and seventh overall, narrowly retaining his series advantage. Khalifa Saleh Al-Attiyah was the early pacesetter on Friday morning, but the Qatari dropped time with a fuel pump problem and incurred massive time penalties, ultimately finishing ninth overall.

Dania Akeel, a lone runner in T3, claimed another category win in her second event to head the classification after the fourth round of the series. She did not however escape problems and was another to incur penalties for failing to complete all the opening stage.

After three consecutive events in the Middle East, the FIA World Cup for Cross-Country Bajas takes a break before heading to Europe for Baja Spain, July 23-25, the mid-season event of the nine-round series. It also marks the opening round of the new FIA European Cup for Cross-Country Bajas, where contenders can fight for their own FIA title in this regional five-round Cup.