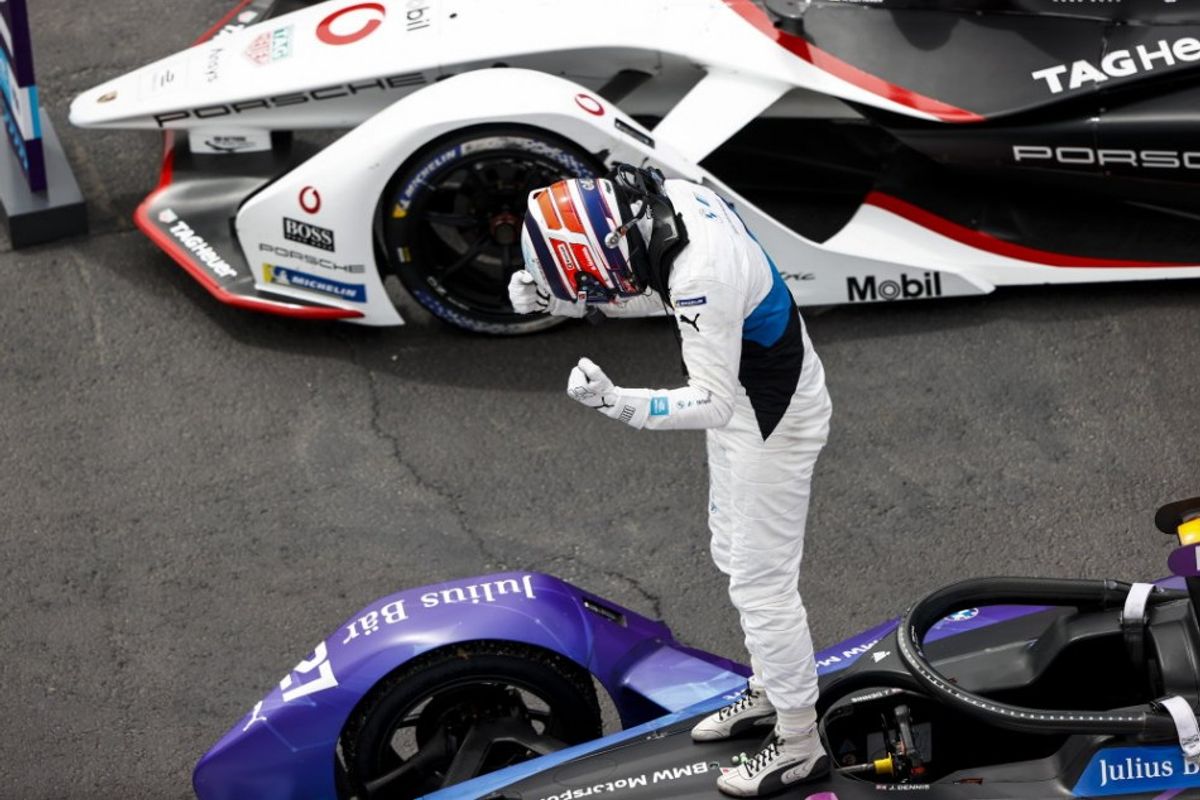 Jake Dennis only registered his first ABB FIA Formula E World Championship points Saturday, but on Sunday  the BMW i Andretti Motorsport rookie converted pole position into a brilliant lights-to-flag victory around the Circuit Ricardo Tormo in just his sixth start in the all-electric single-seater series.

Dennis made the most of a drying track in qualifying to snatch the top spot on the grid for the second Valencia E-Prix, which took place in dry and sunny conditions, in stark contrast to Saturday’s rain.

After making a textbook getaway when the lights went out, the Briton spent the first two-thirds of the race under relentless pressure from countryman Alex Lynn (Mahindra Racing), who was artfully biding his time in his rival’s slipstream in second.

Lynn’s constant presence meant Dennis could not afford to put so much as a wheel out-of-place, but the threat subsided when a tag from Norman Nato (ROKiT Venturi Racing) sent the Mahindra car momentarily off-track and down to seventh, earning the Frenchman a five-second penalty.

Thereafter, Dennis was afforded some breathing space, and his excellent energy management meant that even when Nato and André Lotterer (TAG Heuer Porsche) closed onto his tail beginning the final lap, he did not need to be unduly concerned. A maiden Formula E triumph was just reward for a superb drive.

Having featured up towards the sharp end of the action throughout, Nato crossed the line second but dropped to fifth in the final classification once his penalty was applied. Lotterer thus inherited the runner-up spoils to belatedly get his season off the mark following a difficult opening five races, with the recovering Lynn rounding out the rostrum in third.

The Mahindra man went on a charge after the collision with Nato, pulling off a succession of late passes to secure his first Formula E podium finish and an extra bonus point for posting the TAG Heuer Fastest Lap along the way.

Oliver Rowland wound up fourth for Nissan e.dams following a characteristically punchy and committed performance, ahead of Nato in fifth and René Rast, who produced a remarkable climb through the field to scythe from 14th on the grid to sixth at the chequered flag for Audi Sport ABT Schaeffler.

Two-time Formula E Champion Jean-Éric Vergne placed seventh for DS TECHEETAH on his 31st birthday, with Oliver Turvey adding more points to NIO 333’s tally in eighth as the team’s strong start to the season continued. From fourth on the grid, the Briton ran as high as second after activating his first Attack Mode of the E-Prix, before conceding ground.

Edoardo Mortara made it both ROKiT Venturi Racing cars inside the final top ten in ninth, pulling off an opportunistic move early on to steal two positions at once around the outside, as 2016/17 title-winner Lucas Di Grassi rose from 22nd to tenth to snare the final point on offer.

Elsewhere, all of the main championship protagonists entering the race came away empty-handed. Sam Bird ended up 14th for Jaguar Racing, with team-mate Mitch Evans 15th, Mercedes-EQ’s Nyck de Vries 16th and Robin Frijns (Envision Virgin Racing) just 19th. Having fought his way from 17th place up into the scoring positions, Stoffel Vandoorne in the second Mercedes entry failed to finish after coming together with Sébastien Buemi (Nissan e.dams).

De Vries nonetheless still tops the title table, nine points clear of Vandoorne as Formula E heads next to Monaco for round seven of the 2020/21 campaign on 22 May.

“I am lost for words. The whole race inside the cockpit was incredibly technical. Pulling a gap at the right point to get the ATTACK MODE was so crucial. Everyone in the team did a great job. I’m really happy for everybody. We had such a tough start to the season, but today we turned it around. We are back in it again.”

“You never know what to expect in Formula E. I thought it was going to be all about patience in terms of energy management and tyres. We stayed calm and my engineer and team predicted the right moves from the very beginning, and we executed them well.”

“This is my first Formula E podium and it feels great! Hats off to Jake as he led from the front! It was our plan to stay behind but you are at risk of someone making a mistake, especially when you are in a train. We got a bit unlucky, but we recovered nicely, so thanks to the team. This is my first podium finish and it feels super sweet!”