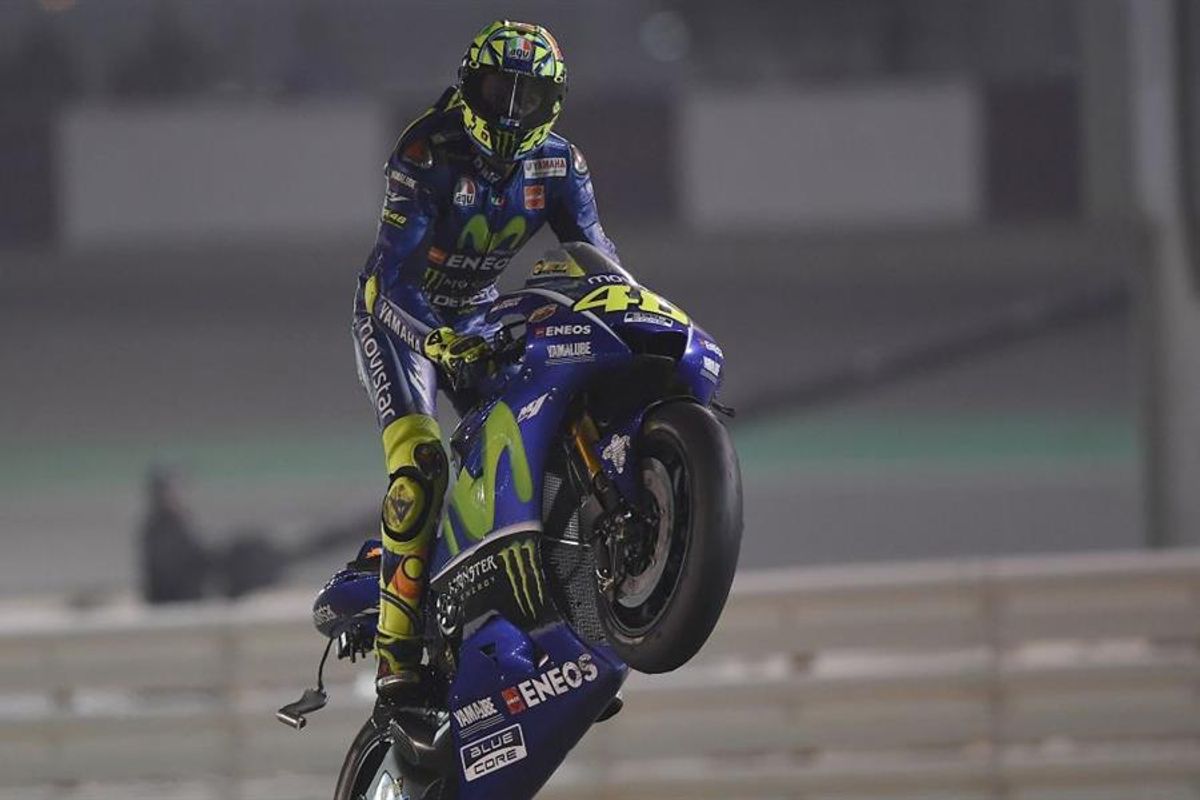 Rain, delays, uncertainty and a decision for a slightly shortened race distance prefaced the 20 laps that then blew the drama out the water: MotoGP™ is back for 2017, and in some style. After stealing the headlines throughout preseason, Maverick Viñales (Movistar Yamaha MotoGP) retains them after his first win for Yamaha – but easy it wasn’t, as the polesitter fought it out with Andrea Dovizioso (Ducati Team) in an awesome desert duel. Valentino Rossi (Movistar Yamaha MotoGP) completed the podium in third after coming back from P10 on the grid.

A stunning start from Andrea Iannone (Team Suzuki Ecstar) from P2 was soon overshadowed as rookie Johann Zarco (Monster Yamaha Tech 3) slammed into the lead in the first laps, getting away and making a gap as Viñales found himself falling back into the clutches of his teammate. But despite an incredible display, the fairytale came to an early end for the Frenchman as he slid out of the lead soon after – leaving ‘DesmoDovi’ out front.

With the number 4 Ducati getting away in the lead, Iannone then crashed out of the fight for second – leaving reigning Champion Marc Marquez (Repsol Honda Team), Viñales and Rossi chasing the leading Desmosedici. After a classic scuffle between the number 46 and 93, the ‘Doctor’ set off in pursuit of his teammate.

And then there were three: Viñales, Dovizioso, and Rossi.

It wasn’t long, however, before there was some fresh air between lead two and the number 46 – with a duel setting in that saw Viñales’ corner speed pitched against the sheer might of the Ducati. After trading places for a few laps and the race impossible to call, the Spaniard was then able to hold off the Italian on the penultimate lap – and made it to the line to take his second MotoGP™ win, and his first in Yamaha colours

Marquez crossed the line fourth, just ahead of teammate Dani Pedrosa by the flag - who took fifth after getting the better of Aleix Espargaro (Aprilia Racing Team Gresini). Espargaro's result was a historic first top six for Aprilia in the stunning first ride in Noale colours for the rider from Granollers. Impressive performances from Scott Redding (Octo Pramac Racing) and Jack Miller (EG 0,0 Marc VDS) saw the two men come home in P7 and P8, with Alex Rins (Team Suzuki Ecstar) top rookie in P9 – just ahead of Monster Yamaha Tech 3 rider Jonas Folger, who completed the top ten.

Jorge Lorenzo (Ducati Team) went wide on the first lap after a solid start, down to near the back of the grid after carefully rejoining and then beginning a steady fight back through the field. Up into tenth with 12 laps to go, the ‘Spartan’ crossed the line in P11 by the end of play.

Cal Crutchlow (LCR Honda) crashed out of contention before rejoining and then suffering the same fate, with Alvaro Bautista (Pull&Bear Aspar Team) crashing out soon after, as well as Octo Pramac Racing rider Danilo Petrucci - joining Iannone and Zarco on the list of unluckies in round one, but sure to be back for more next time out.