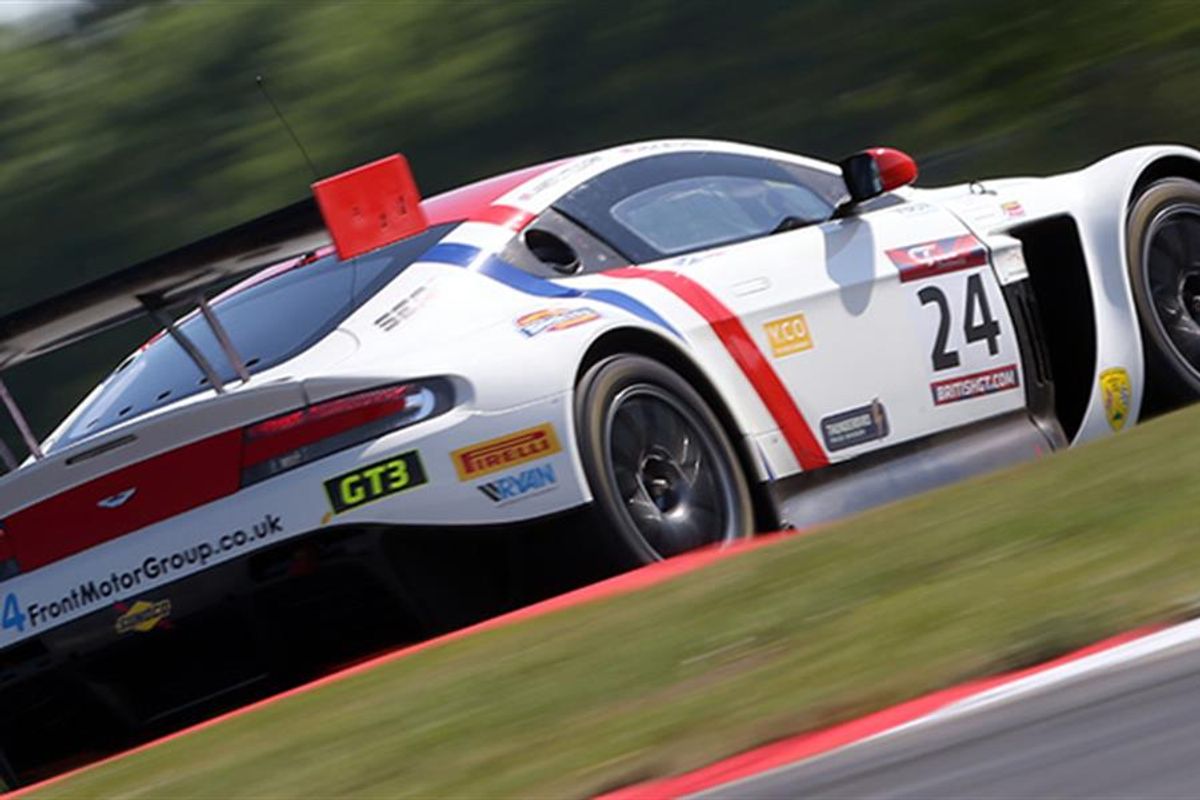 GT3 AM: MITCHELL GETS THE BETTER OF MINSHAW AND PARFITT JNR

Jack Mitchell was imperious in the first of this afternoon’s 10-minute qualifying sessions en route to a comfortable pole position for tomorrow’s opening race.

As a Silver Cup crew Mitchell and co-driver James Littlejohn’s Aston Martin carries additional weight to balance it against the Pro/Am pairings. Not that anyone informed Mitchell who claimed provisional pole on his first flying lap before lowering it by another half-second to end up with a 1m48.555s.

That was sufficient to see off Barwell Motorsport’s Jon Minshaw, who was 0.876s further back after also improving on his second run. However, the championship leader will be fully aware of Mitchell’s five-second success penalty - incurred as a result of finishing third at Rockingham - that his Aston Martin will serve during its mandatory pitstop tomorrow.

After a slow start, Team Parker Racing’s Rick Parfitt Jnr chipped away at his time to end up 1.3s behind Mitchell. That was good enough to leapfrog the Bentley - subject to the maximum 10-second pitstop success penalty tomorrow - above Liam Griffin’s Barwell Lamborghini at the end of the session, while TF Sport’s Mark Farmer and AMDtuning.com’s Lee Mowle completed the top-six.

Reigning champion Derek Johnston put his seventh place down to excessive oversteer but still finished ahead of Duncan Cameron’s Spirit of Race Ferrari, which will remain stationary during tomorrow’s pitstop for an additional seven seconds as a result of finishing second at Rockingham.

Topping both free practice sessions made Phil Keen the man to beat in Race 2’s qualifying, and the championship leader delivered another dominant performance to head a Barwell Motorsport one-two.

Team-mate Sam Tordoff was the first driver into the 1m37s bracket, but his time at the top was short-lived before Keen crossed the line. His first flying lap was comfortably quick enough for pole and his second a fraction faster en route to a best of 1m47.332s.

Matt Griffin admitted to not getting the most out of his Spirit of Race Ferrari but still lines up fifth ahead of Callum Macleod’s Bentley and Jon Barnes’ Aston Martin. Ryan Ratcliffe, James Littlejohn and Martin Short rounded out the Race 2 top-10.

Lanan Racing and Ginetta’s Alex Reed emerged from an ultra-tight Race 1 qualifying session with a second Snetterton GT4 pole position in as many years after an incredible battle with HHC Motorsport’s Will Tregurtha and Black Bull Garage 59’s Sandy Mitchell. Indeed, just 0.045s covered the top-three at session’s end.

Track-club’s Adam Balon made the early running but was soon replaced at the top by Reed who initially enjoyed a small advantage over Tregurtha’s Ginetta and Mitchell’s McLaren.

All three were then faster second time around with Mitchell initially pinching provisional pole by just 0.004s. But Reed wasn’t finished and managed to lower the session’s benchmark to 1m58.031s, 0.045s ahead of Mitchell and 0.009s faster than Tregurtha who subsequently slotted into second.

It was an ideal result for Reed and co-driver David Pittard who, unlike their rivals in second and third, have no success penalty to serve during Sunday’s opening race.

The Tolman Motorsport driver looked quick in practice and carried that form into the Pro qualifying session by immediately posting the fastest time of the weekend before lowering the benchmark again to 1m57.225s.

Lanan Racing’s David Pittard initially looked most likely to challenge. He was second after the first runs and would have lapped two tenths shy of Osborne’s time were it not for a track limits violation. Instead it was Stuart Middleton who came closest to toppling the McLaren, but the championship leader - like HHC Motorsport co-driver Tregurtha - ultimately had to settle for a place on the front row after lapping 0.267s slower.

The #100 Black Bull Garage 59 McLaren also claimed a brace of third places as a result of Ciaran Haggerty lapping 0.4s shy of Osborne, while Pittard’s opening gambit was still fast enough to give him fourth.

Track-club’s Adam Mackay was second quickest at one point before slipping to fifth, 0.6s down on the pole time, but still finished ahead of Jacob Matthiasen who enjoyed a strong run to sixth aboard the first of Century Motorsport’s Ginettas. Elsewhere, PMW Expo Racing/Optimum Motorsport’s reigning class champion Mike Robinson will be disappointed with seventh, while In2Racing’s Euan Mckay can be content with P8 on his GT4 debut.

Jack Mitchell, #24 Macmillan AMR Aston Martin V12 Vantage GT3: “That makes up for what happened at Oulton! We’re getting better with every lap and I now feel a lot more comfortable. Actually, I was a bit shocked by the time because we hadn’t run new tyres this weekend up until that point. So I was really happy with that. We took plenty of confidence from our Rockingham podium, but also learnt plenty on the old tyres there. With the success penalty it’s important to build a gap at the start before handing over to James [Littlejohn].”

Phil Keen, #33 Barwell Motorsport Lamborghini Huracan GT3: “One-lap pace is clearly there and we need to build on that for the race. We’ll see where we are at the end of Race 1 - we don’t have a success penalty so by starting second it’s reasonable to assume we’ll be somewhere near the front without any problems. But obviously that has a knock-on effect for me starting Race 2. We really do just have to wait and see.”

Alex Reed, #51 Lanan Racing Ginetta G55 GT4: “Two years in a row: I don’t call it my home circuit for nothing! I’m really chuffed - it’s an ideal situation for us because we really needed pole for the first race when we don’t have a success penalty, hopefully do well and then take Race 2 as it comes. We’re chasing the championship lead here so a big thanks to the team for making it happen in qualifying. We had no problems at all.”

Joe Osborne, #56 Tolman Motorsport McLaren 570S GT4: “It’s the car and hard work Tolman have put into it that’s taken pole position today. I thought my lap was pretty average so I think the time’s down to the Tolman boys. They make my life easier! We’ve been a bit unlucky so far this year - the damage in Race 2 at Oulton was unfortunate and the Safety Car screwed us at Rockingham. But as we’re starting at the front tomorrow hopefully we’re more in charge of our own destiny.”

Tomorrow’s first 60-minute race begins at 11:40 before the second takes place at 16:00. Watch them both live on Front Runner TV as well as the British GT Facebook page and website.