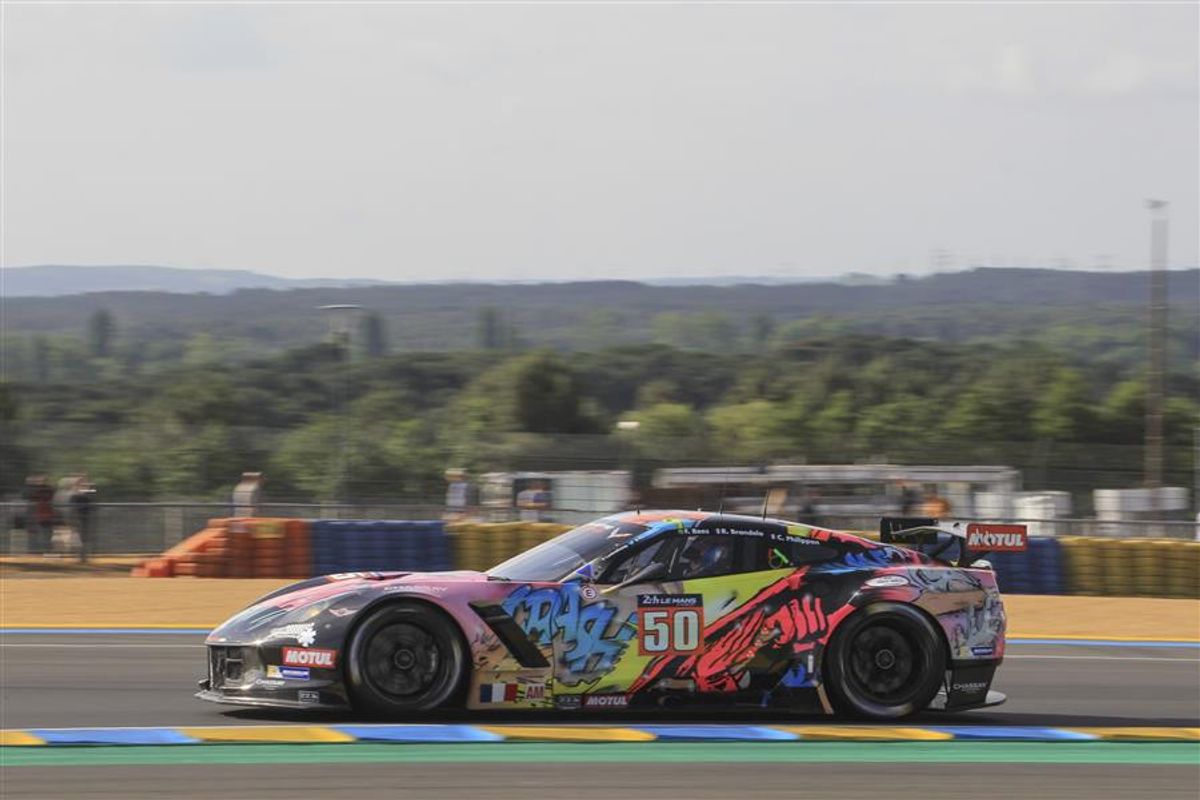 After unveiling its vibrant DayGlo colour scheme created for its 24th participation in the French endurance classic last Friday (June 2), the Le Vigeant-based squad set the second quickest time in the LMGTE-Am category on Sunday (June 4).

With a time of 3:58.302 (set at an average speed of 205.9kph), Christian Philippon, Romain Brandela and Fernando Rees finished a mere 0.052s adrift of the #98 Aston Martin, which currently leads its class in the FIA World Endurance Championship standings.

Gaps proved to be extremely close across the LMGTE-Am field, as only three tenths covered the four manufacturers - Corvette, Aston Martin, Porsche and Ferrari - which speaks volumes about the well-adjusted Balance of Performance for 2017.

Held two weeks prior to the 85th running of the iconic Le Mans 24 Hours, the official Test Day offered Larbre eight hours of track time and the opportunity to go through the different items on team manager Jack Leconte’s programme.

First and foremost, it gave Philippon, Brandela and Rees the chance to familiarise themselves with the daunting 13.629km Circuit de la Sarthe. This was all the more important for Le Mans debutant Philippon, who had to complete the mandatory 10 laps to take part in the race.

Larbre also made the most of last weekend’s dress rehearsal to tweak and fine-tune the setup of their Corvette C7.R to suit the preferences of all three drivers. The French GT experts ultimately enjoyed a smooth and trouble-free day to rack up 78 laps and test various key components, including race-spec brake sets and the various tyre compounds supplied by Michelin.

Christian Philippon: “Last weekend’s test was quite special for me since I had to complete 10 laps in order to qualify for Le Mans. It also gave me the opportunity to gauge myself and see how I stack up against the competition in the GTE category. There is always some apprehension, but in the end the times showed I was on the pace and I think Jack was happy with my work. I am lucky to be partnering two fine team-mates: Fernando has great speed, while Romain is consistent and reliable, which bodes very well for the race.”

Romain Brandela: “That was an enlightening Test Day. Our goal was to rack up the miles while also further finding our feet and analysing our Corvette C7.R. There were some yellow flags and safety cars in the afternoon, but we still managed to complete our programme and the performance was there, which is a great omen for next week!”

Fernando Rees: “We had a very successful day, having completed our long list of check-ups and preparing the package for race week. We have gathered important data, the car was faultless the whole time, and we have shown that the pace is there. I'm very thankful for the amazing job by the whole Larbre Competition squad and our partners at Corvette Racing.”

Jack Leconte, Team Manager: “Larbre Competition’s Test Day went exactly as planned, which is rare enough in motorsport to be worth a mention!

“Christian qualified for the race and other tests were used to set up our Corvette C7.R so our three drivers are happy and comfortable at the wheel, which is always an important factor at Le Mans.

“They all need to secure more laps under their belt but thankfully the work we have done throughout the test will save us valuable time next week, and we can focus on giving them more track time.

“As for our ‘Human’ livery, I could see that my fellow team managers were both surprised and pleased by the end result. Early feedback from the fans was very positive as well, so we can’t wait to see the reception we’ll get on Le Mans week.”

Designed specifically for Larbre’s #50 Corvette by artist Ramzi Adek, the ‘Human’ colour scheme hit the track for the very first time last Sunday and immediately captured the imagination of people in the industry and grandstands alike.

The next opportunity to behold this striking livery in all its glory will come on Sunday 11 June when Larbre attends the traditional Pesage ceremony. Jack Leconte’s team will go through administrative checks at 15:00, while technical scrutineering is set for 15:30.

The French team will also host a special press conference in its motorhome on Wednesday 14 June. All three drivers, Jack Leconte, Ramzi Adek, and Corvette Racing’s Doug Fehan will be available for interviews, while there will also be photo-call opportunities with the #50 ‘Human’ Corvette C7.R on display outside Larbre’s hospitality. Journalists and photographers are welcome until 12:00 with coffee and appetisers from catering experts La Tarte Tropézienne.

*Timings given in local time