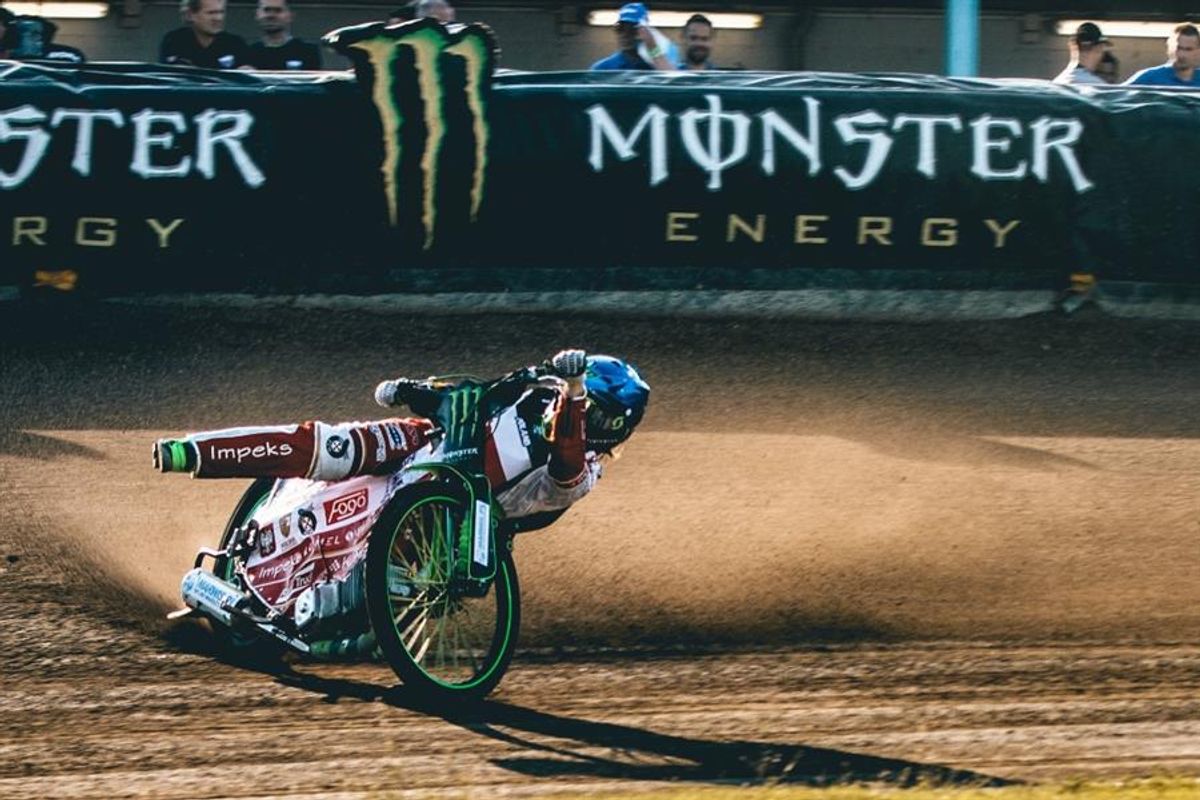 The #MonsterEnergySWC reached an awesome climax in Leszno, Poland with Patryk Dudek leading the home nation to victory in front of 17,000 super-charged fans.

The young Polish team were expected to retain their title but they did it in style and sent thousands of supporters into raptures by proving that they are truly the best Speedway nation in the world.

Up against Great Britain, Sweden and Russia, Poland stamped an early marker by racing into the lead straight away and inspired by their home fans, they were never going to let it go.

They charged ahead but had to survive a fightback from Sweden during the middle of the match – who had Antonio Lindback to thank for their silver medal. Lindback scored an incredible 20 points to give Sweden a glimmer of hope but the Poles weren’t going to be denied.

‘Duzers’ scored 10 points, including winning his first two races, and collected his third World Cup gold medal at the age of just 24.

We caught up with him straight after the race, “I feel great, it is my third time riding in the World Cup and my third gold medal, it was an amazing night. The atmosphere was incredible, it was different for us than the other times because we are at home with our fans and it was special.

’17,000 people in the house, it was great power for us and inspiration for the whole team. The more people in the stadium the better for us and it was amazing. It was cool to ride with my friends, we are always in good contact and we have been together this week – it has been good.

“We know that when we race against each other it stays on the track but when we get together for the national team we all want the same thing and we are good friends. It’s just a great feeling to win for all the Polish fans again, thank you to them for the support and I’m happy we brought the trophy for them. Amazing.”

The battle for third place was between Russia and Great Britain and it went right down to the wire, but it was the Russians who nicked it to take home an unlikely bronze medal.

TEAM GB took the battle for bronze to the wire but Emil Sayfutdinov inspired Russia to third in the Monster Energy FIM Speedway World Cup final.
There were no surprises at the sharp end as red-hot favourites Poland, packed with four current Grand Prix riders, successfully defended their crown by eight points from Sweden.
The Swedish tally was boosted by three courtesy of the flying Antonio Lindback’s joker in heat 10 and wins for Freddie Lindgren and another for Lindback closed the gap to two points after 12 races.
However, the rampant hosts did not look back, frequently ripping around the outside to claim chequered flags while Sayfutdinov and the odd Brit proved Sweden’s spoilers.
Poland captain Maciej Janowski, brutally ousted from the team ahead of the 2016 final, top scored with 14 to banish that memory.
“I feel good but so tired,” said Janowski. “I think I need a week off!
“This meeting cost me so much energy because we concentrated so much and were a little bit nervous. This is amazing.
“Because the whole team has to score good points, not only one rider, I think it cost us more energy than a GP.
“The whole team performance was so good. We watched the race off and talked so much about set ups, the weather, everything. I cannot celebrate too much, though, because tomorrow I have the Polish league.”
Britain trailed Russia by a small amount for most of the night but still had hope of a gong going into heat 20.
Robert Lambert put up a huge fight in a bid to make up the required two points on Sayfutdinov, who was initially pushed wide before battling back for second ahead of Lambert.
“We came up a little bit light,” admitted GB boss Alun Rossiter.
“I thought we were good enough for a bronze but a couple of the boys struggled early on and when you have someone like Emil in the last one, you know it will be tough.”
On the prospect of nerves playing a part, Rossiter said: “You can usually tell if someone starts jumping about but I have to say we were relaxed, there were no excuses there. It was down to our lack of experience.
“We have been doing a bit of networking over here and have a test match lined up against Unia Leszno next year and we may have one with Poland.”
Relative novice Steve Worrall performed well with six points from six rides despite bursting the tapes in his opening race.
“Steve certainly didn’t disgrace himself, it was just that first one,” said Rossiter. “He said it was not nerves, something just went but there were races where he went from third to first, back to third then last. It was really tough out there.
“I have a good set of lads who really came together well. They have taken the fitness and nutrition on board and are learning. We can only get better.”
Towards the back end of the meeting, it was seasoned World Cup charger Chris Harris and Worrall leading the way for Britain but some impressive gating did not convert into wins as the Poles flew past.
Arguably the race of the night involved Worrall, who jostled for every position before coming in last behind Grand Prix trio Lindback, Patryk Dudek and Sayfutdinov.
“It was exciting and not a bad race to finish last in,” said Worrall. “I knew I would be up against it but I was happy with that.
“It is not just being in the race, it is the passing and re-passing. In Europe it is a lot different to Britain, you have a lot more room to do it with. Hopefully, I will keep learning.
“It is not a track we ride every day and to find a set up in one day is tricky. We don’t have the experience in our team but overall, it was a good performance and I was over the moon with my display. It was a good night.
“It was a great night and one I will remember. You watch Grand Prix racers and think ‘little old me’ but inside, I know what I can do, even though I don’t go boasting about it. I’ll definitely take away all of the positives.”

That’s the World Cup done and dusted for another year and now all eyes go back to the Grand Prix series and the next event on the calendar – the awesome British Grand Prix in Cardiff in just two weeks.