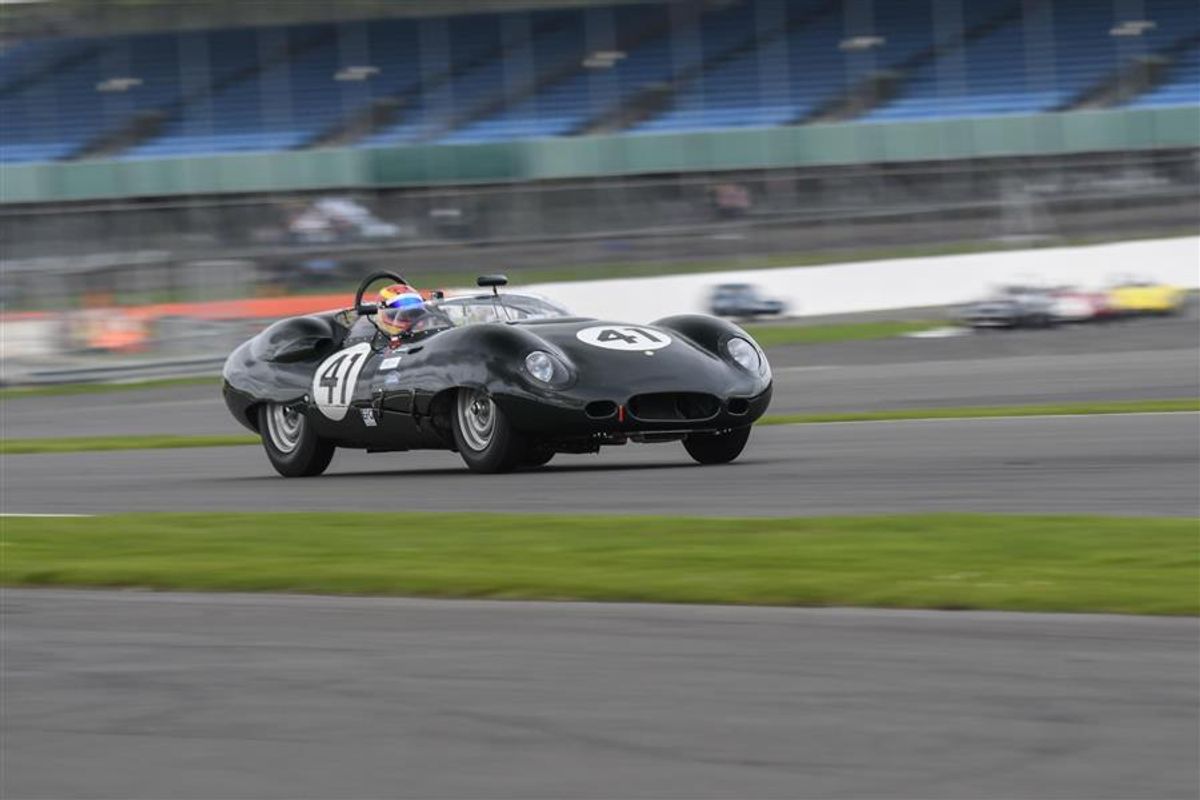 The team’s Costin Lister came from second on the grid to take overall victory in the Stirling Moss Trophy
The JD Classics Cooper T33 finished a close second in the Woodcote Trophy
In the Jet Super Touring Trophy, the team’s TWR XJS finished third-in-class, despite technical problems in qualifying
JD Classics campaigned six cars, including a Lister Maserati and Bastos Rover, while its Jaguar XJ220C took part in the XJ220 parade

The JD Classics Competition Department is celebrating another successful race weekend, with a victory, a podium finish and a third-in-class at Silverstone Classic 2017.

It was in the Stirling Moss Trophy that the JD Classics team achieved their biggest success, with Chris Ward competing in the Costin Lister. Despite setting a blistering 2:24.6 in the latter stages of qualifying, the Costin Lister was just beaten, by 0.599 seconds, to pole position by the Lotus 15 of Graham and Ollie Bryant.

As the Stirling Moss Trophy race began on Saturday morning it didn’t take long for Ward to get back into the lead. The Lotus 15 was slow to start, allowing the JD Classics Costin Lister to eke out a 13-second lead by Lap 13, when it came into the pits for its compulsory stop. Rejoining the race in second, Ward battled to the front until the leading car pitted, giving JD Classics back the lead. Despite being forced to lap slower traffic, Ward crossed the finish line 14 seconds ahead of the next quickest car.

In the Woodcote Trophy, JD Classics was campaigning three cars; a debut outing for the ex-Archie Scott Brown Lister Maserati, a Cooper T33 and the Jaguar XK120 of Steve and Josh Ward. As race-winner last time out at Silverstone Classic, the Cooper immediately began setting quick lap times with Chris Ward at the wheel, eventually qualifying third. The Lister Maserati managed an impressive 13th on its first time out and the XK120 ended the session 29th on the grid.

As the Woodcote Trophy race got underway on Sunday, the third-placed JD Classics Cooper T33 – now driven by Andrew Smith – was forced back into fourth on the first lap to avoid a wayward Cooper T38. Meanwhile, the team’s Lister Maserati was on a charge, overtaking two cars to claim 11th by the end of Lap 2.

Soon enough the team’s Cooper T33 was back in third, before pitting on Lap 8 and returning to the race in 13th, with Chris Ward taking the wheel. Ward was able to drive up to eighth over the next two laps, just ahead of the JD Classics Lister Maserati in ninth. The Cooper continued to chase down the leaders, eventually passing the chequered flag just behind the race-winning Cooper T38. The Lister Maserati narrowly missed out on fourth position, crossing the line in fifth, with the XK120 in 32nd following an early spin having hit an oil slick.

In the first race of the Jet Super Touring Trophy, JD Classics’ Bastos Rover SD1 and TWR XJS were forced to start towards the back of the field following technical issues in qualifying. Thanks to the hard work of JD Classics’ expert technicians both cars were in perfect order for the race, and Chris Ward was able to make up more than 15 positions to finish third-in-class. Steve Soper, in the Bastos Rover, wasn’t far behind, finishing sixth-in-class.

During the second Jet Super Touring Trophy race, both JD classics finished strongly again, despite a severe downpour. When not under pace car, all drivers were struggling to stay on the slippery track, with even Chris Ward spinning the XJS early in the race. Nevertheless, Ward recovered to finish fifth-in-class, with the Bastos Rover crossing the finishing line fourth-in-class.

Part of the weekend’s events involved a celebration of the Jaguar XJ220 supercar on its 25th anniversary, with a parade of more than 40 examples. JD Classics was at the head of the pack, with the XJ220C driven to class victory at Le Mans by David Brabham, David Coulthard and John Nielsen in 1993. Controversially, the car was later disqualified. In an emotional display, David Brabham took the wheel of the car once again, with Tom Walkinshaw’s widow, Elizabeth, beside him.

JD Classics Managing Director, Derek Hood, said: “With more than 1000 cars involved in Silverstone Classic, and over 100,000 spectators, it’s one of the biggest stages in historic racing. Our Competition Department is absolutely up to the challenge, though, as proven by the fantastic results; a victory, a podium and a third-in-class, not to mention a few fastest laps. Race preparation on this scale is tough, but our expert engineers make it look easy – I’m extremely proud of them. It was an absolute pleasure to be able to provide the famous Le Mans XJ220C, too, capping off an incredible – and very successful – weekend of racing for us.”