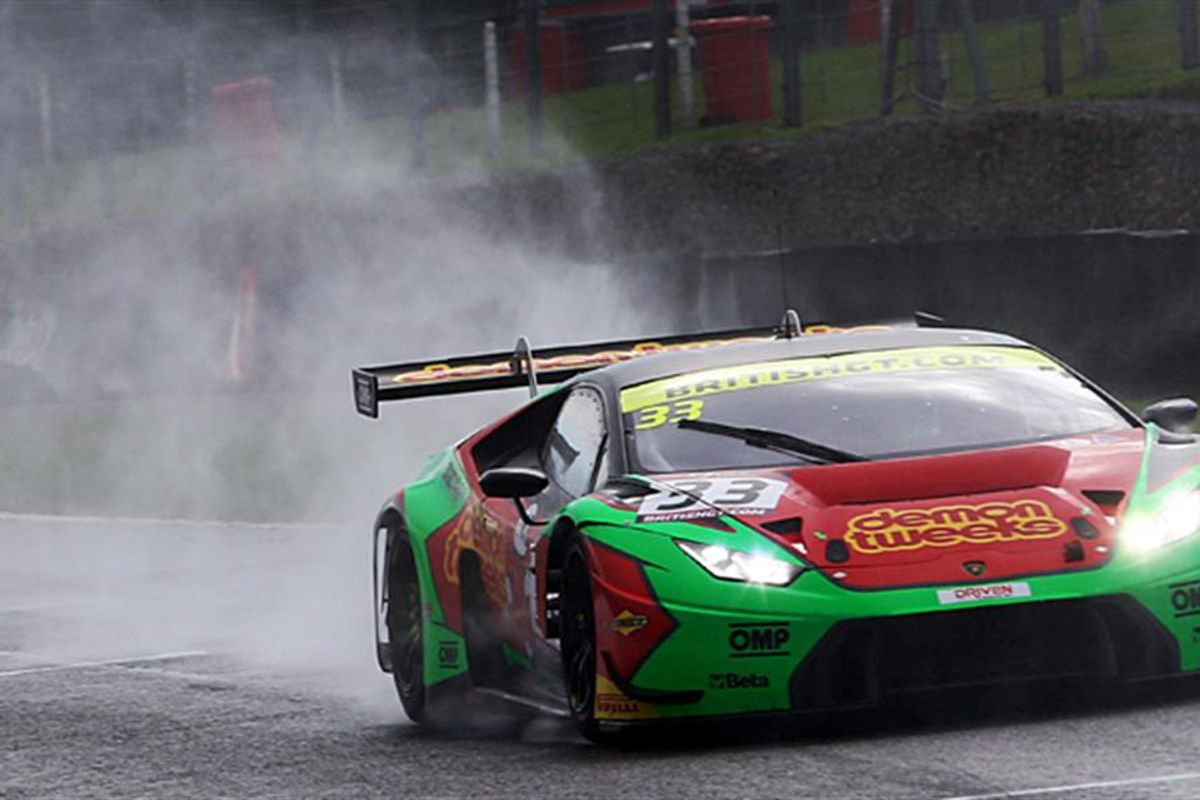 GT3: MINSHAW AND KEEN UNSTOPPABLE IN THE WET

The heavy rain that fell just before this afternoon’s opening session ensured wet tyres were essential for both 10-minute segments.

Championship leader Minshaw, who could seal the title with a round to spare this weekend, was immense in the worst of the conditions as he continually thwart James Littlejohn’s attempts to claim provisional pole.

The Barwell Lamborghini improved on each of its first three laps before Littlejohn’s Macmillan AMR Aston Martin finally overhauled the Huracan. But Minshaw wasn’t finished and circulated quicker again on consecutive laps to establish a 0.718s advantage ahead of the GT3 Pro session.

Liam Griffin also improved late on to vault Barwell’s second Huracan up to third ahead of TF Sport’s Mark Farmer who initially looked like posing the biggest threat to Minshaw. Richard Neary put the Team ABBA with Rollcentre Racing Mercedes-AMG fifth, while Rick Parfitt Jnr - whose Bentley is notoriously tricky in the wet - finished sixth.

Keen was then every bit as impressive as his co-driver in the GT3 Pro session, which he dominated from start to finish. Lap after lap he continued to lower the benchmark time before finally recording a best of 1m34.946s, 0.7s faster than the next best individual time (Adam Christodoulou) and comfortably quick enough to seal his third pole of the season.

Mitchell’s fastest lap was sufficient to keep the Macmillan AMR Aston Martin second in the combined times despite the attentions of Jon Barnes who moved his and Farmer’s TF Sport V12 Vantage ahead of Sam Tordoff and Griffin’s Barwell Huracan in the second session.

Christodoulou was impressive in the Rollcentre Racing Mercedes-AMG en route to the second fastest individual time. However, he and Neary’s fifth place becomes 10th tomorrow after incurring a five-place grid penalty for a red flag infringement in FP2.

That means Parfitt Jnr and Morris start fifth, some way behind their pole-sitting title rivals, while Jonny Adam and Derek Johnston’s TF Sport Aston Martin is sixth in the revised classification. The Spirit of Race Ferrari driven by Duncan Cameron and Matt Griffin is next up ahead of Loggie/Macleod, Brown/Manderson and Neary/Christodoulou.

A rapidly drying track produced the most exciting qualifying session of the season, and it was Academy Motorsport’s Will Moore and Matt Nicoll-Jones who ultimately prevailed after opting to start the second 10-minute qualifying segment on slicks.

That wasn’t an option in the first session, which saw debutant Niall Murray produce the fastest time in his Century Motorsport Ginetta despite yellow flags being waved in Sector 2. A thorough post-qualifying investigation conducted by Race Control found that Murray and several other drivers set faster sector times thanks to the improving track conditions despite clearly and sufficiently lifting through Hawthorns, which was under caution. As such, their times were allowed to stand.

Murray therefore led Black Bull Garage 59’s Sandy Mitchell by 0.344s at the end of an opening session that also saw title rivals Stuart Middleton and David Pittard spend time at the top. While the HHC Motorsport Ginetta ended up third, Pittard slipped to fifth behind track-club’s Adam Balon after spinning his Lanan Racing G55 into the Hawthorns gravel trap with three minutes remaining, resulting in the yellow flags.

Moore’s Aston Martin was sixth, 1.2s shy of provisional pole but 1.1s ahead of Jason Baker in the Rob Boston Racing Ginetta, which is making its British GT debut this weekend.

Wet weather tyres remained the correct choice for the start of Q2, but as a dry line rapidly appeared so the teams that opted to start on slicks moved to the front. That was proven by Tregurtha’s wet-shod championship-leading Ginetta, which initially moved from third to provisional pole before tumbling down the order as conditions improved.

Indeed Moore, who started on slicks along with Haggerty and Alex Reed, was the first to claim provisional pole before Murray’s co-driver Mathiassen reclaimed top spot after dispensing with his wet weather tyres at the end of his out-lap.

Nicoll-Jones was quicker again next time around only to then see Haggerty go faster still. But the Academy Motorsport driver had the final say after improving once more late in the session to finally seal pole for himself and Moore.

Haggerty and Mitchell finished second in both segments to end up just 0.132s behind, while Mathiassen popped his Ginetta into third ahead of Reed as qualifying drew to a close. Both start ahead of GPRM’s Invitation-entered Toyota GT86 driven by Richard Williams and Stefan Hodgetts.

Joe Osborne once again starred for Tolman Motorsport by setting the fastest individual GT4 time across both sessions. His best of 1m35.321s was 0.9s faster than the next quickest (Nicoll-Jones) after pitting for slicks midway through the Pro session. He and co-driver David Pattison, who was 12th after Q1, therefore line-up fifth in class and fastest of the Pro/Am crews.

HHC’s Middleton and Tregurtha qualified sixth but first of those who didn’t run slicks, while a similar story for track-club’s Adam Mackay dropped him and co-driver Balon from fourth to seventh. Team Parker Racing’s Porsche of Nick Jones and Scott Malvern completed the top-eight ahead of Baker and Adam Gore’s Rob Boston Racing Ginetta and Autoaid/RCIB Insurance Racing's G55 driven by Benjamin Wallace and Adam Hatfield.

Phil Keen, #33 Barwell Motorsport Lamborghini Huracan GT3: “Barwell and Lamborghini have done a great job. The car felt good all morning in the dry and obviously it works just as well in the wet. Jon’s once again shown his class and was really on it in those tough conditions. I think the track got a bit slower towards the end - sometimes there’s actually less grip when the top layer of water gets washed away - but we’d already done enough with the early laps.”

Matt Nicoll-Jones, #62 Academy Motorsport Aston Martin V8 Vantage GT4: “I made a decision at the start not to go too quickly because I didn’t want other teams seeing the fast sectors and switching to slicks. I know a few of them then did but, well, they should have done it earlier! We had a podium here in the European championship earlier this year but have missed out on the top step a few times this season after having the rug pulled out from under our feet. But we’ve now got a chance to put that right tomorrow.”