Second Mini Challenge win of the season for Rob Smith 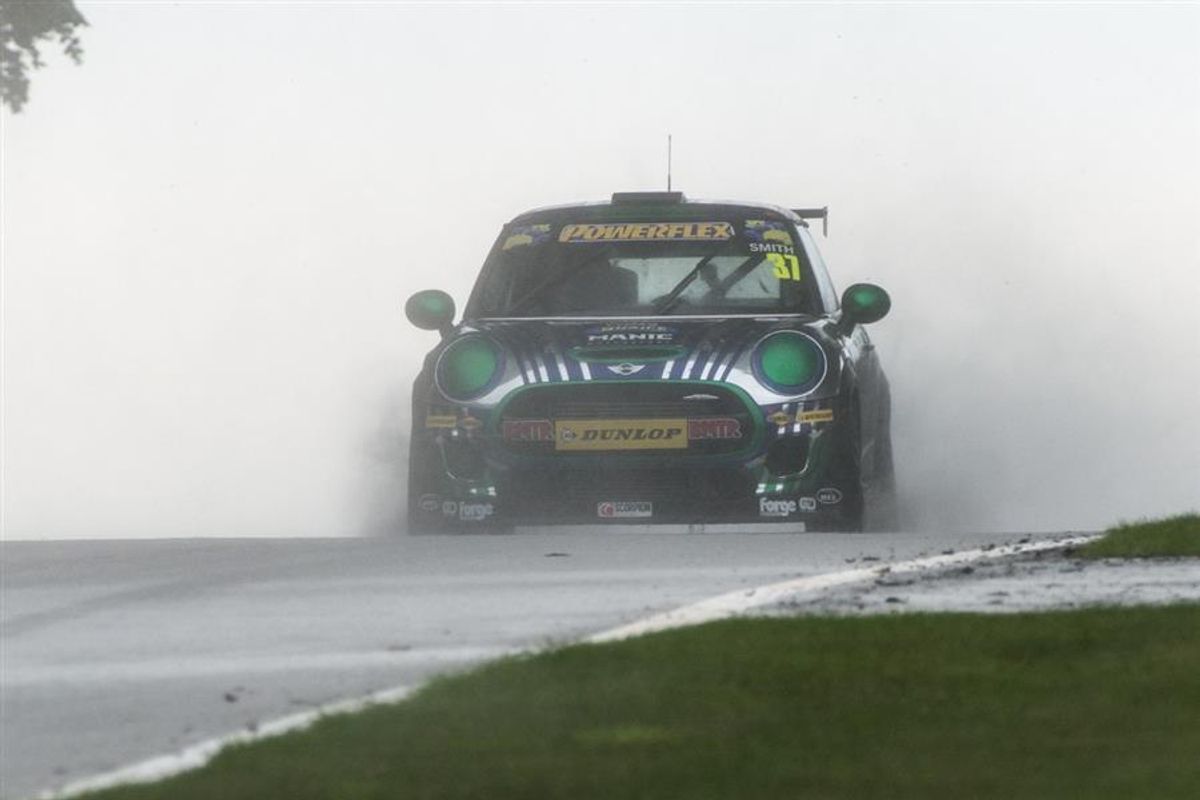 Rapid MINI Challenge front-runner Rob Smith claimed his second lights-to-flag victory of the 2017 season at Brands Hatch Grand Prix Circuit on Sunday, 6th August, with an impressive performance during round 13 of the campaign.

Adding to the win he achieved on the Kent venue’s shorter Indy Circuit configuration during the previous event last month, the Evergreen Tyres, GroupTyre and BMTR supported ace was again the driver to beat with searing pace in both qualifying and race trim.

Race one of the weekend was by no means straightforward for the MINI UK VIP Customer Team competitor – the initial start was red flagged, after a multi car incident, and the re-started contest concluded under Safety Car conditions. Making textbook starts at each time of asking, though, Smith bossed proceedings from the front to climb the podium for the sixth time this season.

“They didn’t make it easy for me – I got away by a mile twice but we had the red flag, then the Safety car”, he reflected, “The team have done an amazing job with the car, they did a great job after the problems we had at Rockingham to get us turned around to where we’ve been for the last few rounds and where we are now.

“When we were on the Indy Circuit last month we struggled with race pace a little bit so we worked on that on Friday in testing and got the car exactly how we wanted. It’s fantastic to get another win, especially at Brands.”

Going into the Brands Hatch GP weekend confident in his ability to challenge for pole position on the Kent venue’s full configuration, Smith didn’t disappoint with a fantastic lap of 1m50.245 seconds (79.45mph) in a very tricky rain-affected qualifying session on Saturday afternoon.

Making a fantastic start to round 13 from pole, he set about controlling the race from the front but midway through the opening lap red flags were shown as a result of a five-car collision at Surtees. Undoing the Evergreen Tyres racer’s brilliant launch he had it all to do again but, at the second time of asking, Smith once more made the most of pole position.

With the race distance shortened to just 10 minutes as a result of the delay, the action was set to be frenetic but Smith focused on the road ahead as he set his sights on putting some distance between himself and the chasing pack.

Into lap two, Smith held an advantage of 0.9 seconds from Lawrence Davey and the next time across the line he had increased his lead to 1.2 seconds. As a result of two cars crashing out at Paddock Hill Bend, though, the race was neutralised and the Safety Car deployed to again erode Smith’s lead.

With the clock ticking down during the recovery of the stricken MINIs, the Safety Car headed the field over the line to the chequered flag with Smith taking a richly deserved second victory of the 2017 season.

Drawing a top four start on the partially reversed grid for round 14, meaning a double podium was certainly on the cards at the very least, Smith’s involvement only lasted until the beginning of lap two as a result of unfortunate contact.

Edged back to fifth place initially, he stayed with the lead quartet and into the final corner at the end of the opening lap Smith got alongside the two cars immediately ahead. Unfortunately, though, contact speared the No.37 MINI into the pit wall and although he recovered, the damage to his car then pitched him off the track and into retirement on lap two.

There are just two weeks to wait until the next event on the MINI Challenge calendar, a standalone one-day race meeting at Oulton Park in Cheshire – Smith’s home track – on Saturday, 19th August.