British GT titles to be settled at Donington 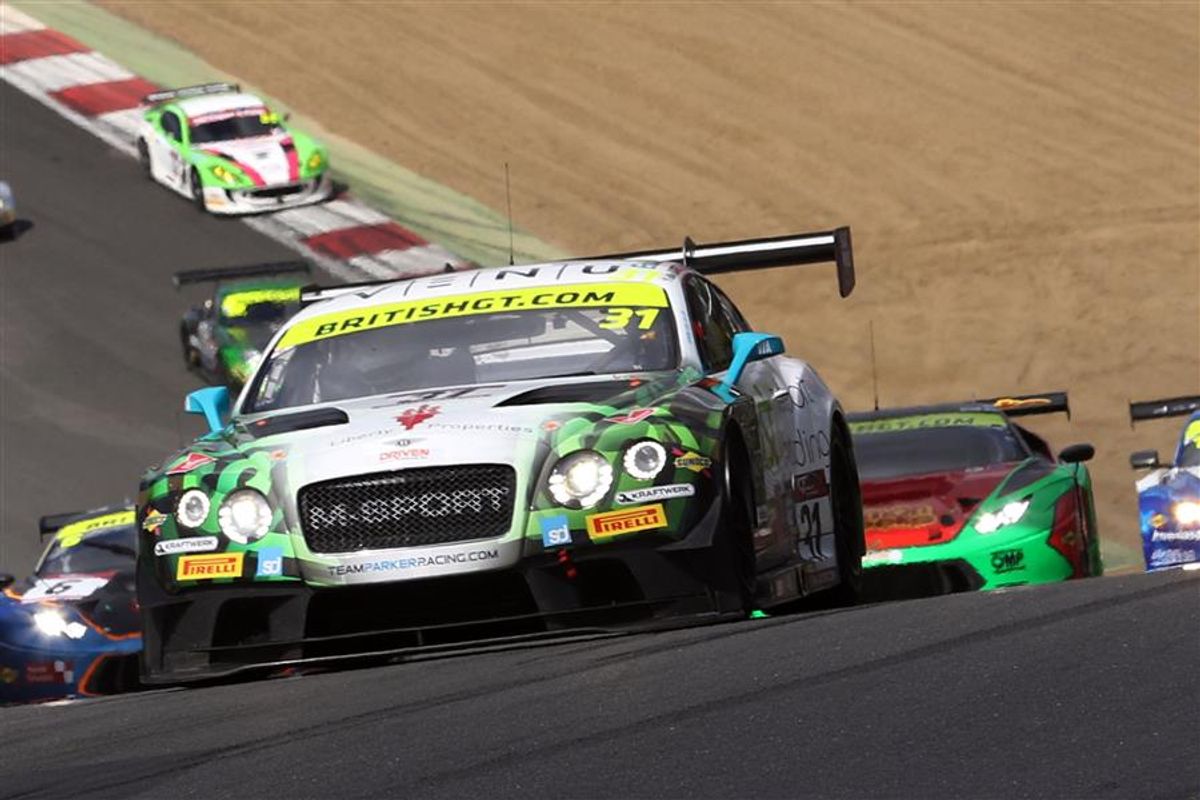 The 25th British GT campaign comes to a close at Donington Park this weekend when new GT3 and GT4 champions will be crowned.

The 10th and final race of the 2017 season - a two-hour enduro around the 12-turn, 2.498-mile former GP venue in Leicestershire - is bound to be tense given the various points permutations in each class. To the winners, a maiden British GT title. To the losers, another year of what might have been.

GT3: BENTLEY VS LAMBORGHINI AT #DONINGTONDECIDER

It’s not often that a crew second in the standings heads into the final round with an equal chance of claiming the title. But such are the complexities at play in GT3 that Jon Minshaw and Phil Keen might even start as favourites despite trailing Rick Parfitt Jnr and Seb Morris by 10.5 points.

Destiny is certainly in their hands. A fifth victory of the season for Barwell Motorsport’s #33 Lamborghini would net its drivers enough points to overturn the current deficit regardless of where their Team Parker Racing rivals finish. Indeed, while second place for the Bentley would see the two crews tie on points, Minshaw and Keen would still claim their maiden British GT3 titles by virtue of winning more races.

The balance is tipped further in their favour by Parfitt Jnr and Morris having to serve the maximum 20-second pitstop success penalty for winning at Brands Hatch while their championship rivals race handicap-free. And if one thing’s for sure it’s that the Huracan will find itself up front at some point on Sunday: Minshaw and Keen have led every race this year, and an incredible 38% of the total laps completed.

A nailed-on first title for Minshaw and Keen, then? Well, not quite.

12 months ago it was the #33 Lamborghini that enjoyed a similar advantage heading into the final round before Minshaw’s accident helped Derek Johnston and Jonny Adam overturn their deficit. Might that sort of pressure tell again? Barwell also acknowledge that Donington is more likely to suit the Continental than Huracan despite both of its cars qualifying ahead of the #31 Bentley last season.

What’s more, each of Barwell’s four victories have come in this year’s shorter, hour-long sprint races. That’s in stark contrast to Team Parker’s Bentley which has scored more points for winning three of the two-hour-plus endurance contests. It’s a statistic that might have to change this weekend if the Huracan is to prevail overall.

Should it do so, Minshaw and Keen would set a new GT3 wins record. Both are currently tied on 11 with Jonny Adam (who could also raise the bar this weekend) and David Ashburn. A fifth victory of the season would also constitute a new GT3 era benchmark: no crew has won more than four races outright in a single season since GT2’s final year in 2006.

But Parfitt Jnr is also chasing his own piece of British GT history. He could become the first driver in championship history to win both the GT3 and GT4 titles, and at the same venue four years apart.

However, there’s also the small matter of Aston Martin’s three-strong contingent, which will be hoping to end the season on a high. The V12 Vantage goes well at Donington, and especially those featuring a TF Sport badge as three podiums in the past two years prove. Out-going champion Derek Johnston is certainly eager to end his title defence in style at a circuit he loves, and that could spell trouble for Minshaw and Keen who, failing victory, need at least two cars between themselves and Parfitt Jnr/Morris in order to pinch the title.

With all eyes understandably focused on the championship protagonists, it might be easy to overlook the four-way battle for third in this year’s standings. Liam Griffin and Sam Tordoff are in the box seats for now but will have Johnston/Adam, the second TF Sport Aston driven by Mark Farmer and Jon Barnes, and the Silver Cup-entered V12 Vantage of James Littlejohn and Jack Mitchell breathing down their necks. Just 8.5 points covers all four crews.

Elsewhere, Nissan and JRM’s British GT3 return provides an intriguing subplot. It will be the GT-R NISMO’s first domestic appearance since 2014 but as a race-by-race entry isn’t eligible to score points. Charlie Fagg and Ben Green’s position is therefore another angle to consider when keeping track of the Drivers’ title fight.

Barwell narrowly lost out on the GT3 Teams’ crown last season but need only another 19 points from the maximum 64.5 on offer across both of its entries to be guaranteed the championship. Team Parker currently occupy second, albeit 45.5 points behind, while reigning champions TF Sport are third. That means both Bentley and Lamborghini could claim their maiden British GT titles on Sunday.

Meanwhile, a quirk of British GT’s points system means that winning the Drivers’ championship outright won’t necessarily guarantee Parfitt Jnr and Morris the Pro/Am class crown. The difference between them and Minshaw/Keen stands at just 1.5 points, while it’s currently 6.5 between the respective Ams in the Blancpain Gentleman Driver Trophy classification.

Long-standing clashing commitments at Spa-Francorchamps see both AMDTuning.com's Mercedes-AMG and the Spirit of Race Ferrari miss British GT’s final round. However, Century Motorsport’s Ginetta is back in the hands of Ben Tuck and Nathan Freke.

While GT3 appears wide open, results last time out at Brands Hatch have made Will Tregurtha and Stuart Middleton firm favourites to win this year’s British GT4 Drivers’ title.

The class had been nip and tuck all year between the HHC Motorsport pairing and Lanan Racing’s Alex Reed and David Pittard before a broken steering arm resulted in the latter non-scoring last month. A podium for their title rivals might have resulted in a 10-second pitstop success penalty to be served at Donington but that will be of little concern given the 25-point lead they now enjoy with a maximum 37.5 still available.

That ensures only first or second will suffice if Reed and Pittard are to have any chance of winning the title. And even then Tregurtha and Middleton would have to finish no better than sixth or 10th, respectively, for Lanan’s crew to overcome the biggest final event points deficit in British GT history.

The blue and white corner also enjoys better form with Tregurtha and Middleton yet to finish outside the top-four in any of the seven races they’ve completed. That record includes two victories and a further four podiums, three of which have come in the last three races. Maintaining that run, or even dipping slightly below their recent standards, will see them become the youngest line-up ever to win a British GT title at a combined 35 years and 160 days, 167 fewer than Ross Gunn and Jamie Chadwick.

But, just like GT3, this year’s overall class champions might not necessarily claim the Silver Cup spoils. Reed and Pittard trail Tregurtha and Middleton by 16 points, and they’re the same number clear of Macmillan AMR’s Jan Jonck and William Phillips who claimed a maiden victory at Brands Hatch. A second in as many races - despite the full 20-second success penalty - would mathematically give them a chance of Silver Cup glory.

Two Silver Cup crews might be challenging for this year’s overall title but Pro/Am has also been incredibly competitive and, arguably, stages GT4’s most intriguing championship showdown at Donington.

Tolman Motorsport’s David Pattison and Joe Osborne head the class after making it back-to-back Pro/Am wins at Spa and Brands Hatch, but after also finishing second overall in GT4 at the latter they’ll be serving a 15-second pitstop success penalty. That could open the door for PMW Expo/Optimum Motorsport’s reigning champions Graham Johnson and Mike Robinson who are 8.5 points behind despite struggling since switching from Ginetta to McLaren mid-season.

The other Pro/Am title contenders, Adam Balon and Adam Mackay, have endured an especially tough time since winning the blue riband Silverstone 500 in June. Just one points finish in three outings ended their overall class title hopes, but expect the track-club McLaren to be a contender this weekend as it looks to overturn a 16-point Pro/Am deficit and cement third in the GT4 standings.

Elsewhere, Black Bull Garage 59’s Ciaran Haggerty and Sandy Mitchell have endured a season of ups and downs but at least have an opportunity to end on a high note at a venue where they claimed fastest lap and victory 12 months ago. And it’s a similar story for Brands Hatch pole-sitters Academy Motorsport, whose Aston Martin won at Donington two years ago.

The GT4 Teams’ title will also be settled this weekend, and incredibly a single-car entry could score enough points to beat one with two. HHC Motorsport lead the way courtesy of Tregurtha and Middleton’s 155 points, 18.5 more than Black Bull Garage 59’s two-car line-up. Lanan Racing also remain in contention but, just like their Drivers’ title aspirations, must also rely on others for a favour.

Watch British GT’s #DoningtonDecider live on the championship’s website and Facebook page, as well as SRO’s GT World Youtube channel, this Sunday afternoon. Coverage begins with Mini Challenge’s first race at 12:35 before the main event at 13:30.

Pirelli supplies the GT3 class with the P Zero DHD tyre, which was introduced at the start of the 2017 season for GT racing around the world. The GT4 class uses the P Zero DH tyre. In the event of rain, both classes will use the Cinturato WH wet-weather tyre.

Jonathan Wells, Pirelli UK motorsport manager: “Donington Park provides a similar challenge to Brands Hatch with a fast and flowing layout. The high-speed Craner Curves at the beginning of the lap place large lateral demands on the tyres, while the biggest braking forces come into the Esses at the end of the back straight. With the championship finely-poised in GT3 in particular, getting the most from the tyres in the two-hour race will be crucial.”