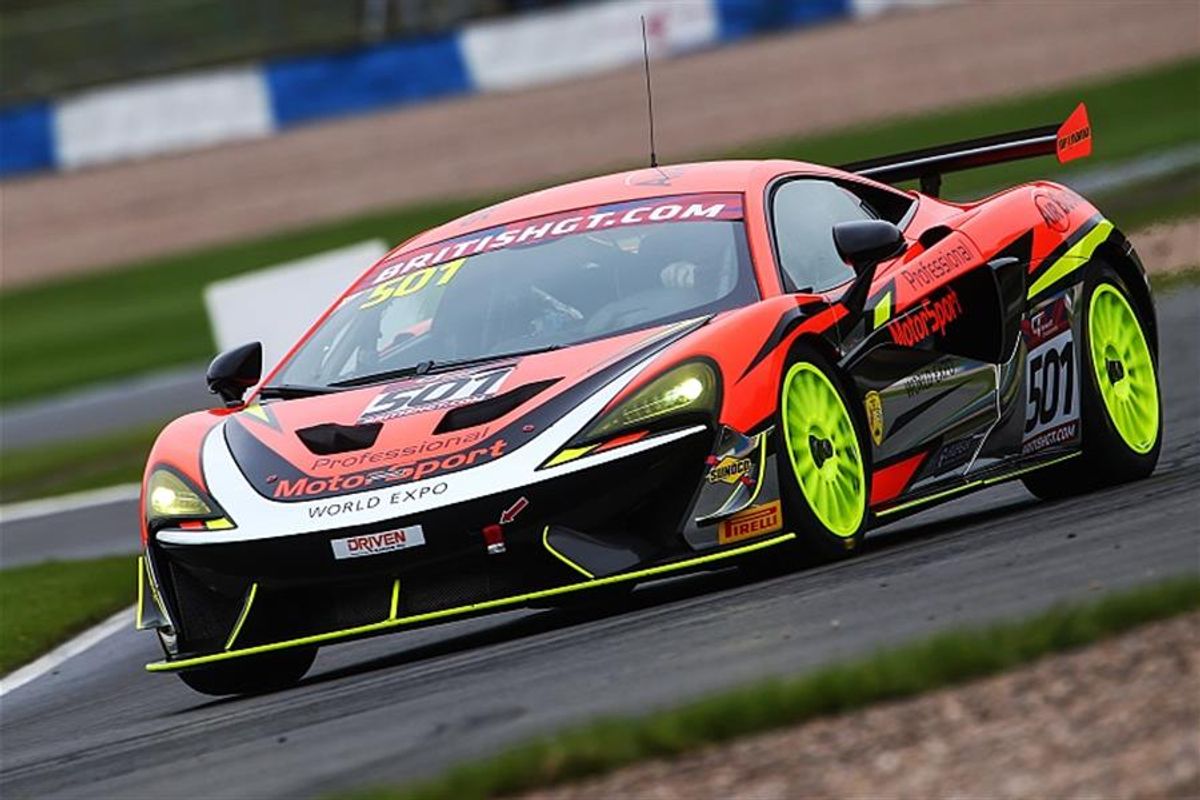 Graham Johnson and Mike Robinson claimed their first British GT4 victory of the season, and with it second in the championship, after claiming their first victory aboard PMW Expo Racing/Optimum Motorsport’s McLaren at the Donington Park season finale on Sunday.

However, it was the HHC Motorsport pairing of Will Tregurtha and Stuart Middleton who took home the major prize by securing this year’s Drivers’ and Teams’ crowns. In doing so they also became the youngest crew ever to win a British GT title.

The pair held a comfortable 25-point advantage heading into the #DoningtonDecider and when their only rivals - Lanan Racing’s David Pittard and Alex Reed - came to grief in the early stages of the two-hour enduro, their title was confirmed. Century Motorsport’s #43 Ginetta driven by Jacob Mathiassen and Niall Murray completed the podium after starting 13th.

Second place in the season finale was also enough to hand Tregurtha and Middleton this year’s Silver Cup crown, whilst Johnson and Robinson’s race-winning performance netted them the Pro-Am championship.

The race got underway with the GT4 field making it through the first few corners without incident. However, contact between the In2Racing machine of William Phillips and Black Bull Garage 59’s McLaren of Akhil Rabindra at the Melbourne Hairpin saw the latter run into race-ending issues just over a lap later.

On the next tour, the #53 UltraTek Racing Nissan driven by Richard Taffinder lost control on spilt fluid. Its race came to an early end nestled in the barriers at Redgate.

Tregurtha ran fourth in the early stages with Reed’s Lanan Racing entry eighth, but the championship battle was soon to be decided by an unfortunate on-track clash.

Will Moore’s class-leading Academy Motorsport Aston Martin, which also started on pole, had run into technical gremlins, which dropped the car down the order. Reed arrived just as the pair were exiting the Old Hairpin, and when the Vantage ahead suddenly slowed the Ginetta was left with nowhere to go. The resulting contact sent Reed into the gravel and retirement after sustaining heavy damage to the front-left corner.

Thus, the celebrations could begin for HHC Motorsport whose Ginetta had also moved up to third behind Andrew Watson and new leader Johnson. Moore’s race was finally run shortly after when the continuing issues resulted in his and co-river Matt Nicoll-Jones’ retirement.

As the pitstop window loomed so the order changed once more with the second place car of Watson slowing out of McLeans, which enabled Tregurtha to pick up another place whilst Adam Balon in the track-club McLaren took fourth from Tolman Motorsport’s David Pattison.

The 15 and 10-second pitstop success penalties for #56 and #55 didn’t affect their positions as Joe Osborne and Stuart Middleton replaced Pattison and Tregurtha at their respective wheels. The Silver pairing of Watson and Sandy Mitchell dropped to fifth in class through the pitstops, while track-club’s Balon and Adam Mackay emerged as the main beneficiaries when the latter jumped up to second.

Robinson, meanwhile, emerged from his pitstop with a handsome 13-second lead once the cycle had shaken out.

Having set a new GT4 qualifying record on Saturday, Osborne continued to show impressive pace en route to the Sunoco Fastest Lap Award and new class benchmark of 1m36.753s. He quickly made his way up to third by overtaking champion-elect Middleton before then relieving Mackay of second. But his and Pattison’s pursuit of the GT4 Pro/Am crown ended soon after when a brake issue pitched the McLaren into the gravel and retirement.

Middleton subsequently closed in and passed Mackay before Mitchell did likewise a few laps later.

The Century Motorsport Ginettas, with Mike Simpson in the #111 and Niall Murray in the #43, were enjoying a good scrap for fifth with 15 minutes to go, but that would soon become a battle for the final podium spot. First, an engine issue dropped Mackay out of contention, and then Mitchell suffered a puncture in the closing stages.

There was still time for one more position change, however, when Murray secured intra-team bragging rights by passing Simpson for the final podium spot. By contrast Robinson saw out the final few laps without incident to take victory, whilst Middleton came home to joyous title-winning celebrations.

Indeed, not only did Tregurtha and Middleton claim the GT4 crown, but they also became British GT’s youngest ever champions. At a combined 35 years and 160 days they broke the record previously held by Jamie Chadwick and Ross Gunn who were 160 days their senior when winning the GT4 title at Snetterton in 2015.

Behind the top-eight, In2Racing’s William Phillips and Matthew Graham came home ninth after early drama, with the Autoaid/RCIB Insurance Racing Ginetta of Chris Milford and Adam Hatfield rounding out the top-10.

Elsewhere, it was a tough day for UltraTek Racing who saw both its cars retire. However, after a night spent repairing and rebuilding Tim Eakin and Kelvin Fletcher’s Nissan 370Z following a hefty shunt in qualifying, the squad was presented with the PMW Expo Team of the Weekend Award.

The British GT Championship returns at Oulton Park for the start of its 26th campaign on Easter Bank Holiday Weekend – that’s March 31-April 2 – next year.

Graham Johnson, #501 PMW Expo Racing/Optimum Motorsport Ginetta G55 GT4: “It was lovely to lead a race again, it’s been a long time! We made it hard for ourselves in the team this year as we had a really good idea of changing the car halfway through the season when we were already second in the championship! I can’t believe we’ve come second overall in GT4 which is fantastic and real credit to how we pulled it together because we were in a bit of a mess in the middle of the season.”

Stuart Middleton, #55 HHC Motorsport Ginetta G55 GT4: “We’ve done it! What an amazing result and it has been the best year I’ve ever had in a racing car. I cannot thank everyone involved with HHC Motorsport enough; what a team, what a car, what a team-mate I’ve got! Everything has worked so well - it’s an awesome result for us!”

Will Tregurtha, #55 HHC Motorsport Ginetta G55 GT4: “It has just been the best season ever! I’ve had so much fun this year, that’s what it is all about. We’re here to have fun and we have done really well in the process. I can’t thank everyone enough. HHC Motorsport has done an amazing job this year so thank you to Jody [Hemmings] and Charlie [Kemp] and everyone else in the team because they’ve not put a foot wrong. It is unbelievable. I’m really happy with how this year has gone.”