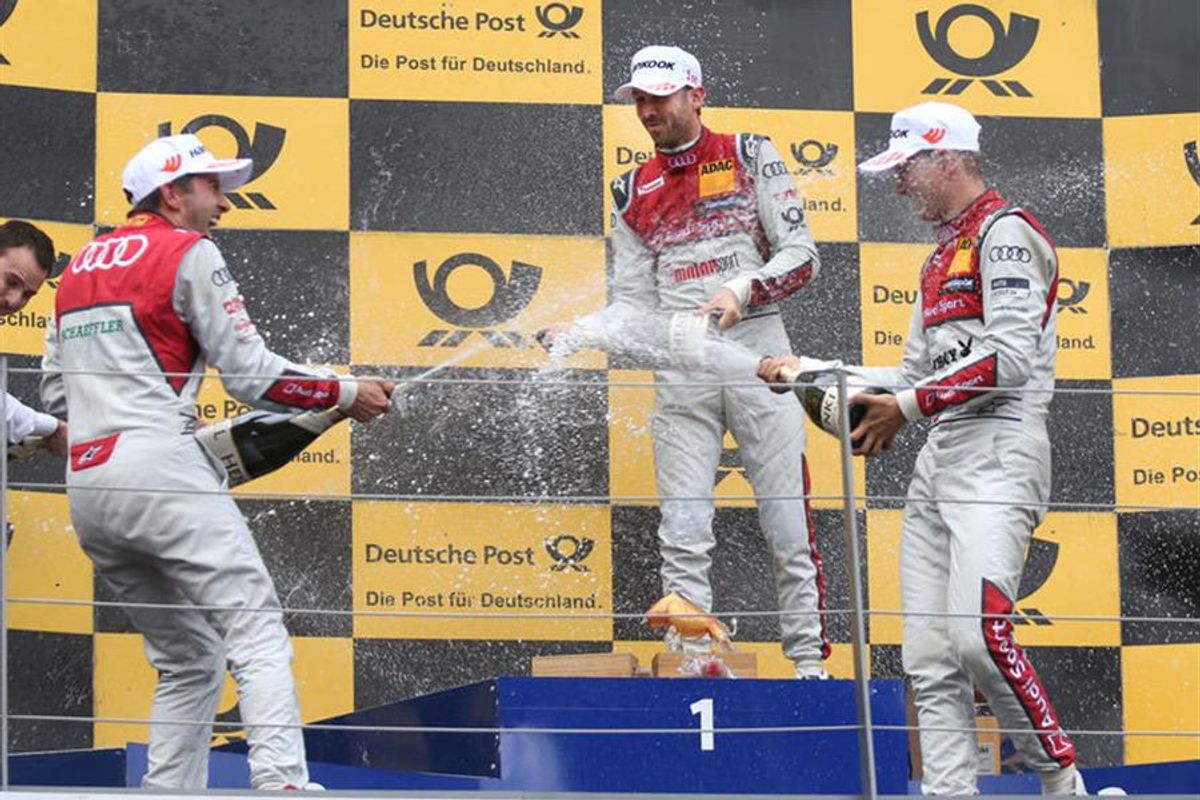 On Sunday, Audi celebrated a one-two-three win in the DTM at the Red Bull Ring in Spielberg (Austria). Following a rather uneventful race on Saturday, the spectators witnessed a spectacular thriller from which René Rast from Audi Sport Team Rosberg in the end somewhat surprisingly came out winning.

The reason was that the man dominating the whole event on Sunday was Rast’s teammate, Jamie Green. The Briton again put his Audi RS 5 DTM on pole position and set the pace in the race right from the start. With René Rast following in his slipstream, Audi Sport Team Rosberg seemed to be headed for a one-two win until the front runner, three laps before the finish, suddenly lost speed and with shifting problems dropped to 14th place.
As a result, René Rast celebrated the third victory in his impressive DTM rookie season and as the new runner-up in the standings is again one in a total of six drivers still having chances of clinching the drivers’ title in the finale at Hockenheim on October 14 and 15. Four of them drive an Audi RS 5 DTM. “For me, personally, it was obviously a superb result,” said Rast. “But I’m very sorry for Jamie. He would have deserved victory today. On the one hand, we can be happy that we’ve won the race. On the other hand, we’re a little sad that it didn’t turn out a one-two win.”

With Mike Rockenfeller (Audi Sport Team Phoenix) and Nico Müller (Audi Sport Team Abt Sportsline), drivers from all three Audi teams were jointly on podium for the first time in the 2017 season. Rockenfeller thought his race was over when he hit a curb hard in the first third of the race. But, following the tire change, “Rocky” fought his way back to the front, overtaking leader of the standings Mattias Ekström and the BMW of Marco Wittmann, among others.

Following his victory on Saturday, Mattias Ekström took fifth place, so defending his lead in the drivers’ standings. From grid position eight, the Swede had to battle extremely hard for his ten points. Ekström chose a risky strategy and changed tires as early as on lap one. When the safety car was deployed shortly before the end of the race, Ekström, running on the oldest tires in the field, was fighting with his back against the wall. Still, in the final hectic stage, the DTM leader managed to overtake BMW driver Marco Wittmann and to bring home fifth place.

Loïc Duval, on the other hand, had the freshest tires in the final sprint, so being able to advance from the last position on the grid to eighth place and to score points for the second time in the DTM.

“That was an awesome race,” said Head of Audi Motorsport Dieter Gass. “With two one-two-three wins, it was a superb weekend for us. But I’m extremely sorry for Jamie (Green). He showed such an excellent performance here from day one. He clinched pole position twice and no doubt would have deserved victory today. Losing so much ground so shortly before the end due to a technical issue is painful. Mattias (Ekström) with a super-risky strategy fought back and is now traveling to Hockenheim as the leader of the standings. The DTM fans can look forward to a spectacular finale.”

Four Audi drivers – Mattias Ekström (172 points), René Rast (151), Jamie Green (137) and Mike Rockenfeller (134) – are leading the standings. Only BMW driver Marco Wittmann (134) and Mercedes-Benz driver Lucas Auer (131) are able to challenge Audi for the title. In the manufacturers’ standings, Audi is 166 points ahead of Mercedes-Benz and 213 points ahead of BMW. In the teams’ standings, Audi Sport Team Rosberg is in the top spot, trailed in second place by Audi Sport Team Abt Sportsline.