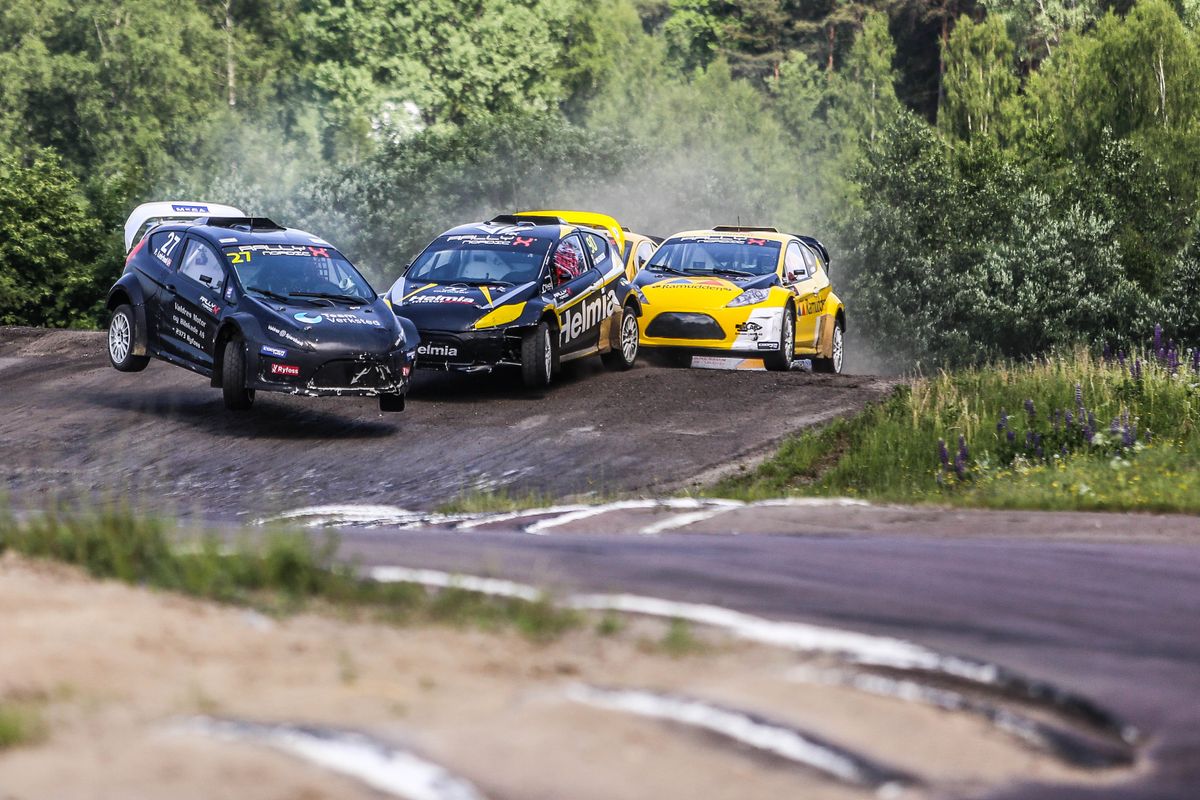 RallyX Nordic visits Grenland for round three of the 2018 season with Thomas Bryntesson and Oliver Solberg bidding strengthen their respective title campaigns as they prepare to fly the flag on Norwegian soil for the first time this season.

A win apiece for Bryntesson and Solberg, who compete under a Norwegian licence, in Holjes and Arvika respectively has seen the pair ascend to the head of the leaderboard as the midway point in the season looms. However, with only 18 points covering the top six with four rounds remaining, this weekend's event in Grenland could well prove pivotal a moment for this year's' brewing title tussle.

Despite seeing his hopes of a second consecutive win scuppered by a time-sapping puncture during the final in Arvika, Bryntesson starts the weekend with a nine-point lead over the opposition and bidding to extend his advantage in the JC Raceteknik Ford Fiesta.

As one of the best-known rallycross tracks in the Nordic region, Grenland Motorsportsenter is renowned for challenging drivers with a demanding layout that is fast, yet is still capable of presenting opportunities to overtake.

Raising the curtain on the RallyX Nordic season in 2017, Grenland represented a number of firsts for many of this year's leading contenders on that occasion. Oliver Eriksson claimed a stunning victory on his first competitive outing at the wheel Supercar machinery in what would nonetheless prove his only RallyX Nordic outing of the year.

Twelve months on Eriksson is back and targeting the title, but heads to Grenland needing history to repeat after a difficult start to the season in the Olsbergs MSE Ford Fiesta left him 18 points shy of the top spot.

Joining him on the Grenland podium that day was Bryntesson and Solberg, the latter achieving the feat on his own Supercar debut. The 16-year old, son of Norway's two-time World Rallycross Champion Petter Solberg, comes to Grenland on the back of a timely third career win in the OSRX Citroen DS3.

Level on points with Solberg and bidding to turn his impressive pace into a first podium of the season is Peter Hedstrom. The Swede was in the hunt for victory in both Holjes and Arvika, only for misfortune in both finals to consign him to an early exit but more determined to make amends in Grenland.

By contrast, fellow Swede Lukas Walfridson is the only driver to stand on the podium in the opening two rounds, the Helmia Motorsport driver now targeting the top step this weekend.

With 13 Supercars chasing honours in Grenland this weekend, Ole Kristian Temte and Ola Froshaug are among those bidding to impress on home soil, while Morten Stensrud and Tom Daniel Tanevik return to the starting line-up in their respective Peugeot 207 and Volvo C30 entries for their first outing since Holjes.

Oliver Solberg, OSRX: "Grenland holds some special memories for me as I made my RallyX Nordic debut there last year, and also ended on the podium, so I look forward to going back this weekend. The track itself is really good fun to race on - fast, flowing, and with chances to overtake as well. The first corner is one of the most exciting, and although grid position is still quite important and pole is the best place to be, there are still opportunities around the outside as well. After my win last time in Arvika last time out my confidence is high, but the season is long and so the aim in Norway is to collect some good points, go for a podium, and anything else is a bonus. The competition is very strong throughout so it won't be easy though!"

RallyX Nordic Series Manager Ian Davies, commented: "The 2018 RallyX Nordic season is hitting its stride now and the title race is really heating up. Whereas last year's event in Norway heralded the start of the season, Grenland marks the pivotal mid-season stop this year with everything still to play for amongst the leading contenders. The opening two rounds delivered some classic RallyX Nordic action and I have no doubt we're in for some more thrilling racing this weekend as this year's all-important championship battle enters a crucial phase in both the Supercar and Supercar Lites classes."

Supercar Lites
Guillaume De Ridder heads to Grenland as the driver to beat in the Supercar Lites class after notching up another comprehensive victory last time out in Arvika. The Belgian's second consecutive 'clean sweep' sees him top the table with a maximum 60 points, placing him 22 points clear of Ben-Philip Gundersen. The Norwegian is one of several local favourites competing in front of the home fans this weekend, with Sondre Evjen, Petter Leirhol and Stein Frederic Akre also looking to impress.