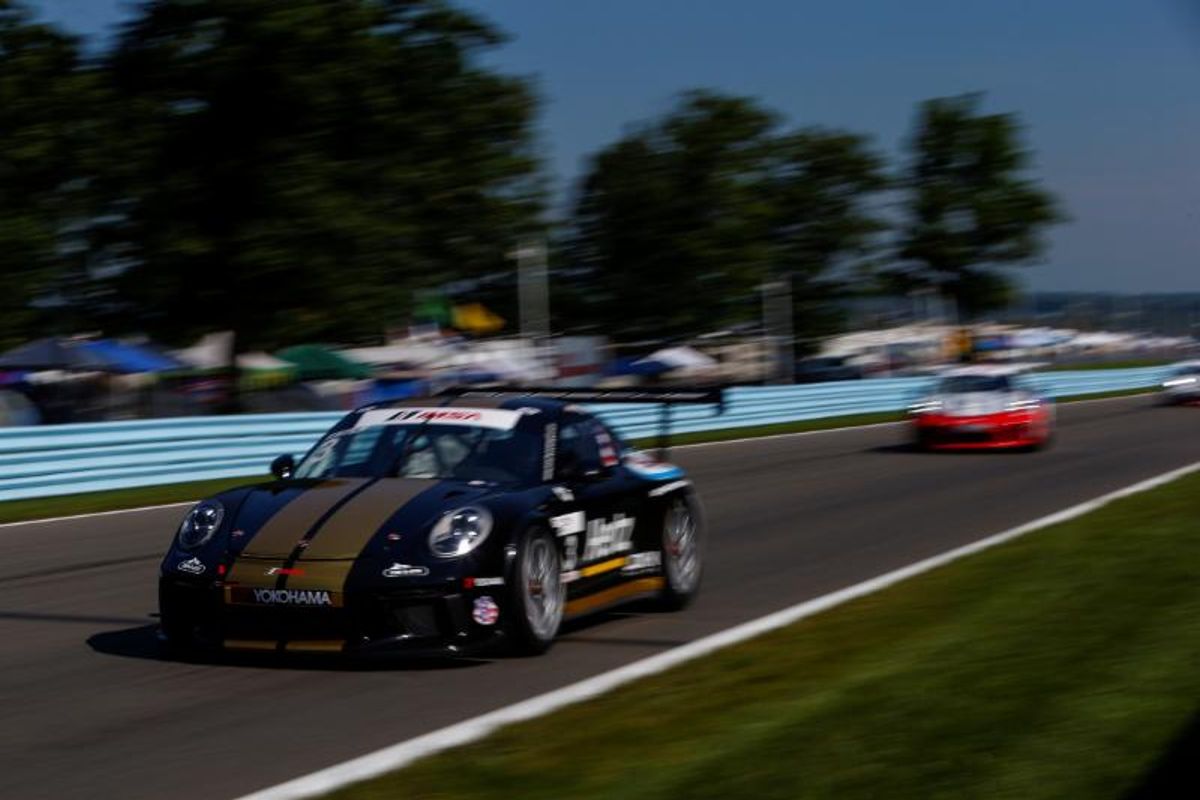 In the moments that followed a crash under wet conditions late in the second Porsche GT3 Cup Challenge USA by Yokohama practice session at Watkins Glen International Thursday afternoon, it would have been difficult to imagine Trenton Estep wheeling the No. 3 JDX Racing Porsche 911 GT3 Cup car into Victory Lane less than 48 hours later.

But that’s exactly what happened on Saturday morning, capping an epic turnaround for the team. The JDX crew worked overnight Thursday to get the car ready for qualifying Friday morning, and Estep responded by placing the car second on the starting grid for Friday’s first 45-minute race of the weekend.

Second is where Estep would finish in that first race, but the fact that he set the fastest race lap put him on the pole position for Saturday’s second and final race of the weekend. That gave him all the track position he needed, as Estep managed to keep the entire field in his mirrors throughout a race that included two full-course caution periods and ended under yellow.

It was his third victory of the season and enabled him to extend his lead in the Platinum Cup standings for Porsche 911 GT3 Cup race cars built in 2017 or 2018 to 13 points, 256-243, over Friday’s race winner, Roman De Angelis, in the No. 1 Kelly-Moss Road and Race Porsche as the 16-race season reached its halfway point.

“Everything goes to these guys,” Estep said. “It’s a miracle we were even on the grid, and these guys worked so hard Thursday night after our accident, all the way until 5:30 in the morning, to get this car ready. The fact that we’re even here is just amazing. I want to thank everyone on the team at JDX, Hertz, Byers, we could be here without you guys.”

Maxwell Root, the 2018 IMSA Hurley Haywood GT3 Scholarship winner, earned a career-best result, coming home second in the No. 7 Wright Motorsports Porsche. Root prevailed in one of the best battles in the race, getting past De Angelis on the first lap following a midrace restart.

De Angelis wound up third for his sixth podium result in eight races this season. David Kolkmann took fourth place in the No. 71 Park Place Motorsports entry, while Geoffrey Boss completed the top five in the No. 12 JDX Racing Porsche.

In the Platinum Cup Masters class, Alan Metni picked up his first GT3 Cup Challenge USA victory. He took the lead when early class leader Fred Poordad crashed in the No. 20 Wright Motorsports Porsche and kept Friday’s Platinum Masters winner, Michael Levitas, at bay for the remainder of the race.

“It feels great,” Metni said. “I want to thank my lovely wife and my four beautiful daughters for giving me the time to go out and train. This was all won in the training, and it took a lot of time away from home. I really appreciate them letting me do this.”

Levitas wound up second in Platinum Masters in the No. 36 TPC Racing Porsche, with Shawn McKaigue completing the podium with a third-place run for the second consecutive day in the No. 34 Fer-Pal Infrastructure machine.

Charlie Luck crossed the finish line third in Platinum Masters driving the No. 45 Wright Motorsports Porsche. However, he was assessed a 29-second penalty post-race, the equivalent of a drive-through, for incident responsibility with Mark Kvamme in the No. 43 JDX Motorsports Porsche and ultimately finished sixth.

In the Gold Cup class for Porsche 911 GT3 Cup cars built between 2014 and 2016, Victor Gomez IV returned to his winning ways on Saturday morning, leading the class throughout the race after starting from the class pole in the No. 25 NGT Motorsport entry. It was the fifth victory of the season for Gomez, who missed out on the win Friday due to an on-track incident, and he continues to lead the Gold Cup standings by 17, 268-251, over Friday’s class winner, Kurt Fazekas.

“I’m really happy I bounced back,” Gomez said. “We were hit in Race 1 and I got bumped back from P1 to P4, but I bounced back to P3. Today was really good. NGT gave me a really fast car. I was able to do consistent laps, stay with the Masters and the Platinum cars and bring home the P1.”

Fazekas came home second Saturday in the No. 52 Kelly-Moss Porsche, while Bill Smith finished third in the No. 42 Topp Racing Porsche, capping a successful weekend at Watkins Glen in which Smith also scored a career-best second-place result on Friday afternoon.

The Yokohama Hard Charger Award for the second race at Watkins Glen went to Tom Kerr in the No. 74 TPC Racing Porsche. Kerr finished sixth in the Gold Cup class and 17th overall after starting the race from 24th place on the grid.

Next up for the 2018 Porsche GT3 Cup Challenge USA by Yokohama is a pair of 45-minute races at Road America in Elkhart Lake, Wisconsin on the weekend of Aug. 3-5 as part of the IMSA WeatherTech SportsCar Championship event weekend.