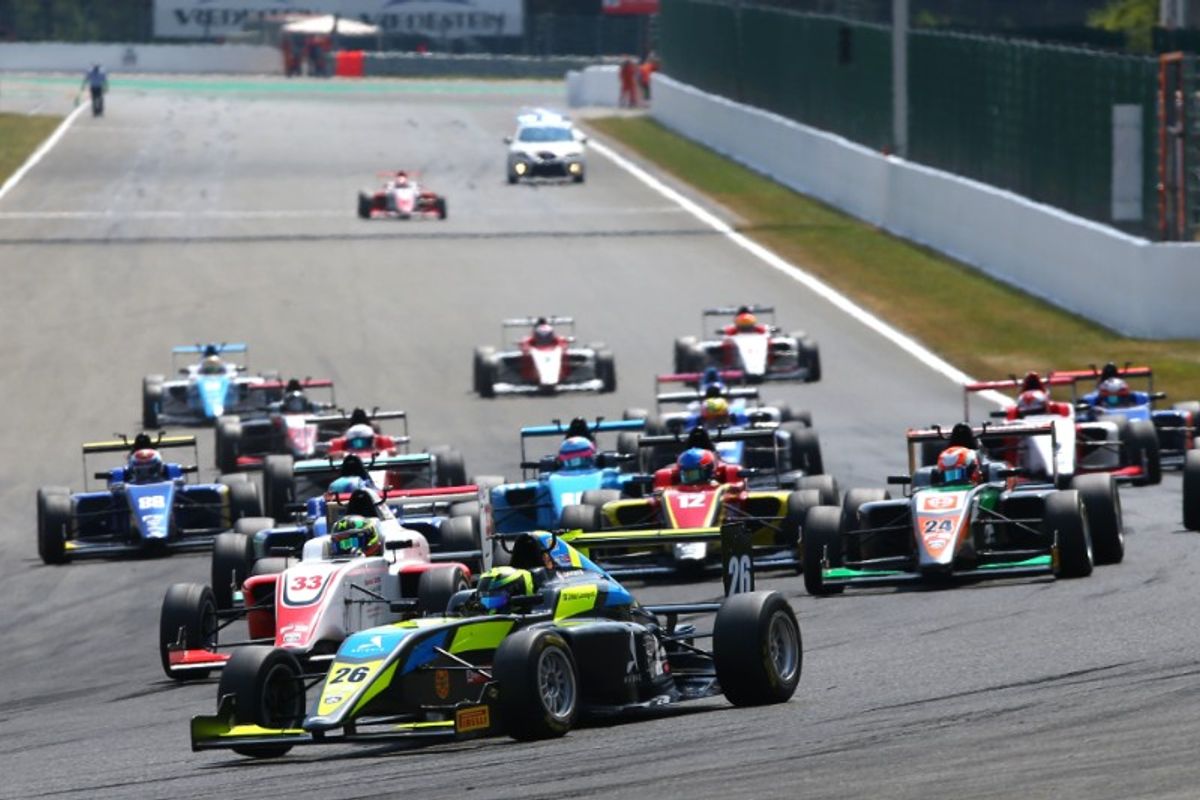 The largest BRDC British F3 field in two years will contest the forthcoming Donington Park rounds this weekend (22-23 September), with 20 cars confirmed on the entry list for a potentially decisive encounter.

The Donington round could be notable for another reason, for this is the first event where Double R Racing’s championship leader Linus Lundqvist could be crowned champion, simply needing to extend his margin at the top of the standings by five more points by the end of the weekend to take this year’s title.

He’ll face a stern fight for that honour though, with Carlin’s Nicolai Kjaergaard enjoying a welcome return to the top step of the podium at Brands Hatch last time out. The Dane trimmed Lundqvist’s advantage in Kent, and will need to do the same this weekend to stand a realistic chance of taking the title. Kjaergaard came within a lap of winning at Donington last year, so should be a key contender up front in the East Midlands.

Kush Maini (Lanan) and local man Tom Gamble (Fortec) will both be looking to return to winning ways, with both men locked in a scrap for third place in the standings, while Krishnaraaj Mahadik (Double R) has claimed podiums this year, but is overdue a first win of the campaign.

Double race winner Manuel Maldonado (Fortec) has enjoyed a much more competitive season thus far compared to last year, and Billy Monger pursues him in the championship standings. Carlin’s Monger makes his competitive return to Donington this weekend, the first time he’ll have raced at the circuit since his accident in 2017, and given his constant gains in competitiveness, could well create a fairytale story this weekend.

Jamie Chadwick (Douglas Motorsport) wrote her way into the motorsport record books at Brands Hatch, after becoming the first female to win a race in British F3’s long history, and will be out to do so again at the circuit where she was crowed British GT4 champion in 2015.

Thai driver Sasakorn Chaimongkol leads Hillspeed’s challenge, having scored two podiums so far this season, with the top 10 in the standings completed Sun Yue Yang, who took his maiden rostrum result at Silverstone.

Chaimongkol’s teammate Jusuf Owega heads to Donington aiming for his first podium finish, while Pavan Ravishankar (Double R) is another to have stood on the top step of the podium this year, and could well have added to his tally at Brands Hatch.

Jamie Caroline returns in his supersub role for Carlin once more, and from six races this season has two wins and an additional podium under his belt. He won twice at Donington in British F4 last year and should be a key player again this weekend.

Ben Hurst (Hillspeed) and Arvin Esmaeili (Douglas) will both be aiming to continue their season-long progress which has seen them move ever closer to front-running pace, while car racing rookie Josh Mason will aim to continue his sharp development curve with Lanan Racing. Mason has already scored a top 10 result and enjoyed some entertaining wheel-to-wheel battles in the process.

Simmons will be looking to continue where he left off at Spa Francorchamps, a round that saw him qualify fourth on his debut, and also claim a best race result of fourth, while Defourny is aiming for better luck after his maiden British F3 weekend in Belgium was brought to a premature halt. Defourny is a proven front-runner in single seaters and is a likely podium contender at Donington.

Newcomers Ericsson and Carey meanwhile will look to make an impression in Britain’s most competitive and highest-subscribed contemporary single-seater racing category – this weekend’s grid is not only the largest British F3 has enjoyed for two seasons, but also the biggest any contemporary UK single-seater series has had in that time too.

The action at Donington commences with four 30-minute test sessions on Thursday, before qualifying at 10.50 on Saturday morning. The first race starts at 15.10 on Saturday afternoon, before two further contests at 11.00 and 17.25 on Sunday.