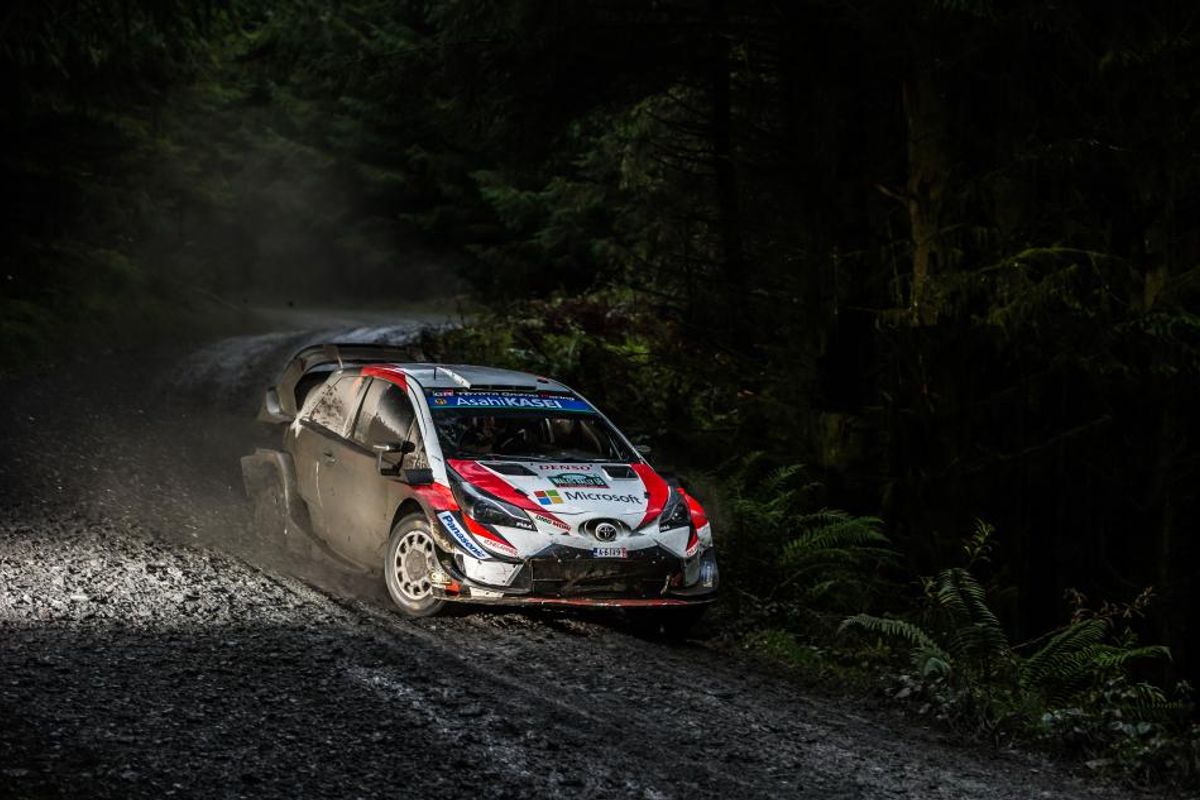 Ott Tänak continues to top the Wales Rally GB leaderboard after Saturday morning’s loop of five stages but, behind him, the leaderboard has turned on its head after Championship front-runner and second-placed Thierry Neuville slid into a ditch, and a flat-out charge from Sebastien Ogier has seen the Frenchman move up to second overall, 48 seconds adrift of Tänak. Jari-Matti Latvala maintains third after briefly slipping back earlier in the morning.

Today is a long and classic day in mid-Wales and covers 150 kilometres of action over nine stages, but with no opportunity for service. This morning’s five stages kicked off in dramatic fashion with Ogier promising a full-out assault after losing time with a gearbox problem yesterday. The Fiesta driver was fastest in the opener, overhauling Latvala and Esapekka Lappi to move from fifth to third in this single stage, slotting in behind his two Championship rivals. But, in the following stage, Neuville’s fight for a maiden world title took a tumble when he slid wide into a ditch, losing nearly a minute as he struggled to get the stricken i20 Coupe WRC moving. He plummeted from second to eighth, paving the way for Ogier to take the position behind Tänak. While the Estonian hasn’t dominated with stage wins in the same way as he did yesterday, he has remained focused on his own rally and headed into the Newtown regroup and tyre fitting zone with 48 seconds in hand to Ogier.

The battle for second is intense with Ogier, Latvala, Lappi and Craig Breen split by a mere 7.4 seconds. While Ogier admitted he made a big assault in the first stage, his position behind Tänak and well ahead of Neuville has now changed his strategy. The Frenchman continues to push, but is unlikely to jeopardise what could be a significant points haul over Neuville. Latvala, 1.7 seconds further adrift, struggled with understeer early morning and dropped back to fifth but he has continued to push and with a good feeling in the Yaris WRC has climbed back to third ahead of team-mate Lappi. The younger Finn continues to lack confidence in the muddy conditions but is in the thick of the fight for second, despite understeering into a bank in the final stage. Breen has made a couple of small mistakes during the morning but the Irish driver is comfortable in the C3 WRC and enjoying what he considers to be some of the best stages in the Championship. With just a handful of seconds separating him from second, the competition is sure to be intense during the afternoon loop.

Changes to the set-up have aided Mads Østberg’s charge and the Norwegian set fastest time in SS11 and has moved from an overnight eighth to sixth, just 12.7 seconds adrift of Breen. Hayden Paddon has dropped behind the Norwegian during the morning, the Kiwi not convinced his tyre choice was perfect for the conditions. He heads the trio of Hyundai drivers, with Mikkelsen eighth and Neuville now ninth after slipping further back, again with not the optimum tyre choice. Mikkelsen has had a better run today and was fastest through SS13, Neuville 1.6 seconds further adrift after confessing to his first real mistake that has seen him stranded somewhere since Rallye Monte-Carlo in January.

Kalle Rovanperä continues to top the FIA WRC 2 Championship standings ahead of Škoda team-mate Pontus Tidemand. Unlike yesterday the youngster has only notched up three of the five stage wins but takes a 59.9 second lead over the reigning category champion, who won one of the morning stages. Gus Greensmith, another stage winner, is third. WRC 3 continues to be led by Tom Williams who won all but one of the five stages to head Enrico Brazzoli by nearly five minutes.