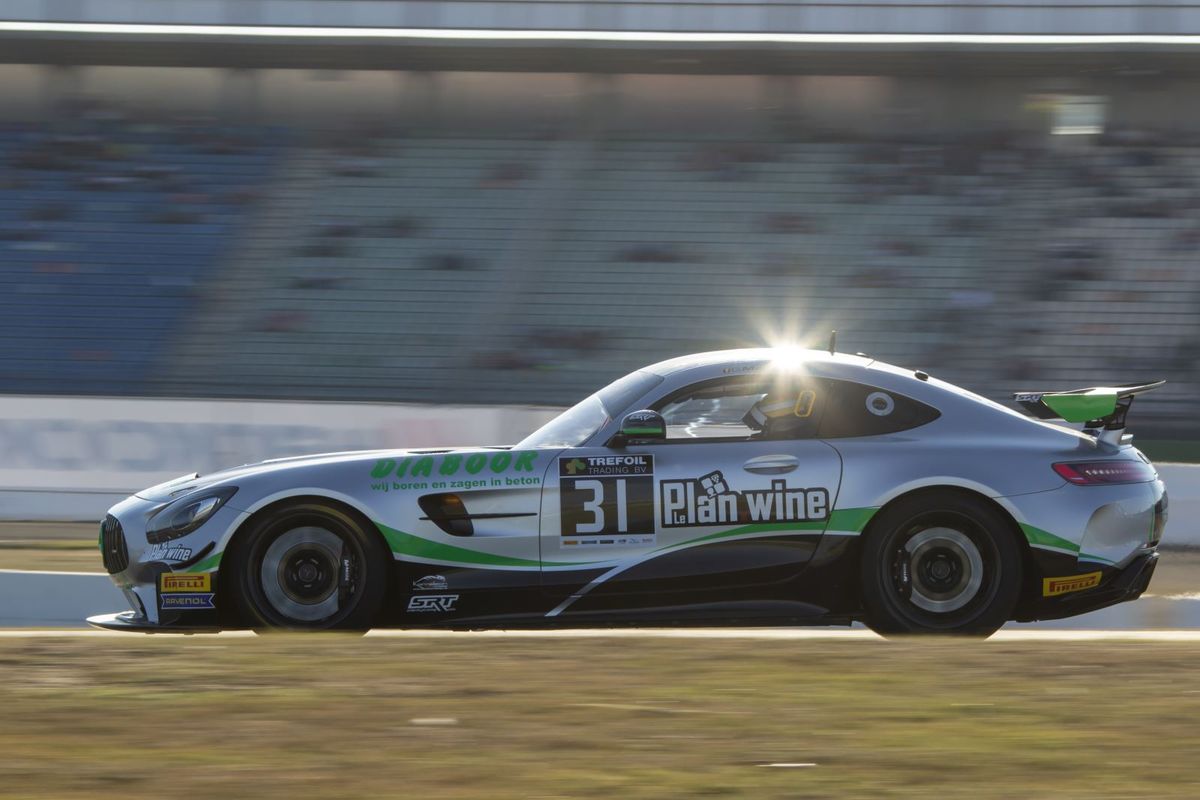 Pole man Nico Menzel held his lead at the start, but Gilles Magnus kept the #31 Selleslagh Racing Team Mercedes-AMG GT4 right behind the #110 Team Macrix by RN Vision STS BMW GT4 and immediately put the pressure on the German driver.

Despite the BMW accelerating faster out of the corners, Magnus managed to stay with Menzel and on lap four he overtook the German as they headed onto the Parabolika. As soon as he had cleared Menzel, Magnus pulled away from the #110 BMW M4 GT4.

Magnus kept the gap between him and Menzel at just under three seconds for several laps, but towards the end of the race he was able to pull a bigger gap as Menzel came under attack from HTP Motorsport’s Tim Heinemann.

Heinemann, who had started from fifth on the grid, finished just eight tenths behind Menzel. The HTP Motorsport driver passed Gabriele Piana for third on lap 9, closed in on Menzel in the final minutes of the race, but ran out of time to take second place from the BMW Motorsport Junior.

With the European GT4 season finished, the focus now shifts to the GT4 International Cup at the Bahrain International Circuit on November 30 and December 1. The GT4 world final will be part of the new Bahrain GT Festival and supports the newly created FIA GT Nations Cup.

Gilles Magnus, #31 Selleslagh Racing Team Mercedes-AMG GT4: “Today, I did have a good start. Yesterday I had a hard time with the BMWs. I knew that I would be able to pull away from them once I had passed them. It wasn’t easy to pass, as he defended well, so I had to go around the outside, but it worked. After that I was able to set my own pace and look after the tyres. In the end I was able to keep up the pace and we won the race by more than five seconds, super!”

Nico Menzel, #110 Team Macrix Software by RN Vision STS BMW M4 GT4: “When you start from pole, you always want to stay in that position. For the first two laps it was alright, but the Mercedes was too fast today, so I didn’t have a chance to avoid the overtake. In the end I have to be happy with second, as the rears went off a bit. It’s better than nothing, like yesterday.”

Tim Heinemann, #48 HTP Motorsport Mercedes-AMG GT4: “Going from virtual to real and now I’m on the podium. It is just awesome, I can’t describe my feelings right now. At the start I lost one or two positions, but after that I managed my way through the field and I ended up on the podium, it is amazing!”

Patrick Selleslagh, team owner Selleslagh Racing Team: “This is the culmination of all the work the team did this season. We knew we’d face strong teams and drivers and that’s why we opted for Gilles Magnus and Bas Schouten. The guys did a magnificent job. We had a good weekend with the entire crew and to finish it like this is great.”