Africa Eco Race steams into Mauritania, stage ends with a spectacular collision for the leaders 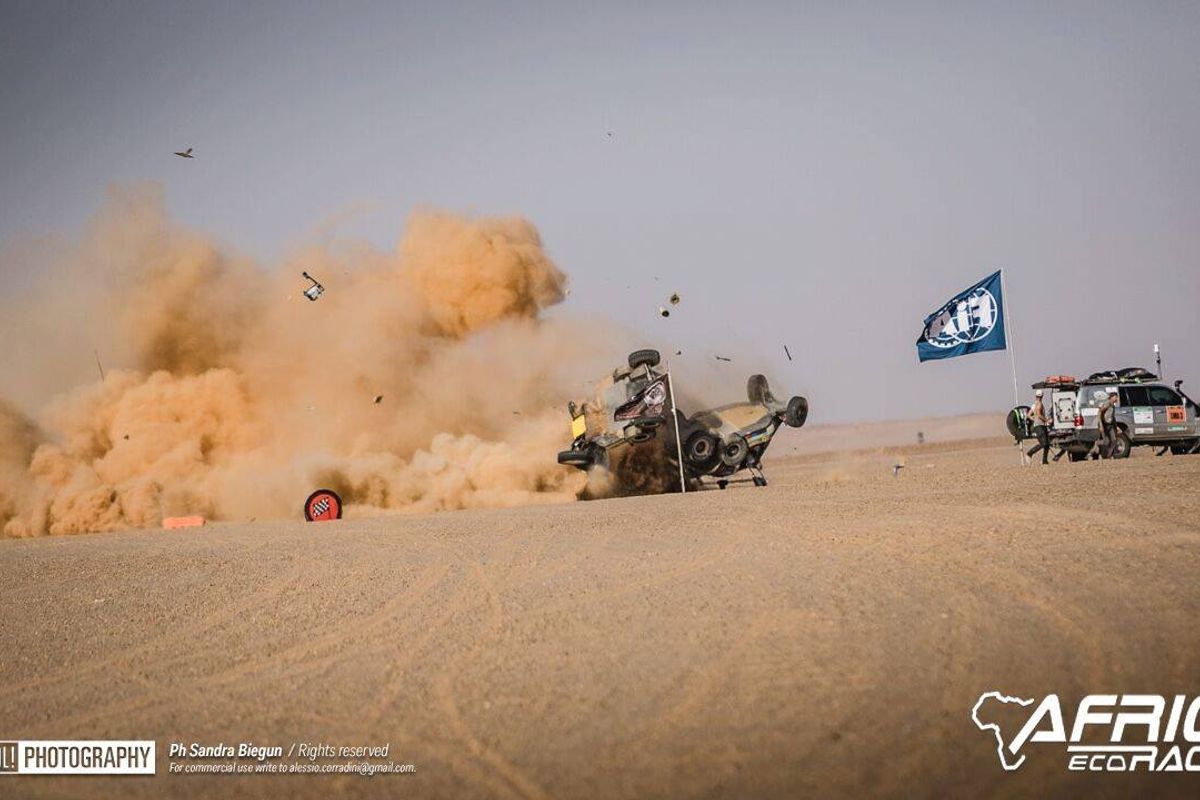 After the cancellation of the 6th special stage yesterday due to the absence of helicopters the race was back on track with the first real Mauritanian stage between Northern Station and Chami- 481km.  All was well until the arrival of the first the buggies at the line when N°202 and211 crashed into each other. The four competitors came out without any serious injuries but the two buggies were totally destroyed. This spectacular accident which happened only 2 km from the bivouac will seriously change the ranking.

FIRST VICTORY FOR AGAZZI in moto
Simone AGAZZI won this special stage with perfect navigation, the Italian moto driver was ahead of Pal Anders ULLEVALSETER by 2’21’’. An incredible feat as the Norwegian caught up Alessandro BOTTURI who was first on the track. The two-first in the general ranking then raced together.

BIG SCARE in the auto category
The auto special stage was going well on a 100% sandy track without major difficulties. Spectators at the arrival located near the bivouac were looking forward to seeing arrival of the yellow OPTIMUS Buggy of Dominique LAURE and Christophe CRESPO in first place, followed closely by Sergey and Aleksandr KUPRIANOV, also in an OPTIMUS. Unfortunately due to a false manoeuvre in the dust, both cars collided resulting in several roll overs. An absolute catastrophe for Dominique LAURE and Christophe CRESPO who had practically won the special stage, and therefore increased their lead on Jean-Pierre STRUGO and Francois BORSOTTO, only 5th at 21’12’’. Unfortunately, the Buggy N°211 was totally destroyed and will not be able to hit the road again today, even if the car could have been repaired, the fact they didn’t pass the actual arrival point would have made them lose  first place with a penalty.  Victory of the day went to the OPTIMUS of David GERARD and Pascal DELACOUR, just in front of the Tarek of Patrick MARTIN and Didier BIGOT at 12’29’’. In the general ranking Jean Pierre STRUGO and François BORSOTTO take first place ahead of Patrick MARTIN and Didier BIGOT, with David GERARD and Pascal DELACOUR taking the last place on the podium.

JACINTO settles leadership in the truck category
Faultless once again today, Elisabete JACINTO, Jose MARQUES and Marco COCHINHO finish 5th in the auto/truck category at 27’59’’. The MAN is ahead of Belgium Igor BOUWENS, Tom DE LEUW and Ulrich BOERBOOM’s IVECO by 9’30’’, as well as Tomas TOMECEK and his TATRA by approx. 20 minutes. In the general ranking, Elisabete is 6th in the auto/truck ranking and 1st of the desert beasts, over 2 hours ahead of Noël ESSERS, Marc LAUWERS and Johan COONINX, followed closely by Igor BOUWENS with 6’14’’.

Today the AFRICA ECO RACE will head to Atar with a special sector of 445 kilometers. The competitors will find their first dunes crossing quite challenging with landscapes only Mauritania can offer.