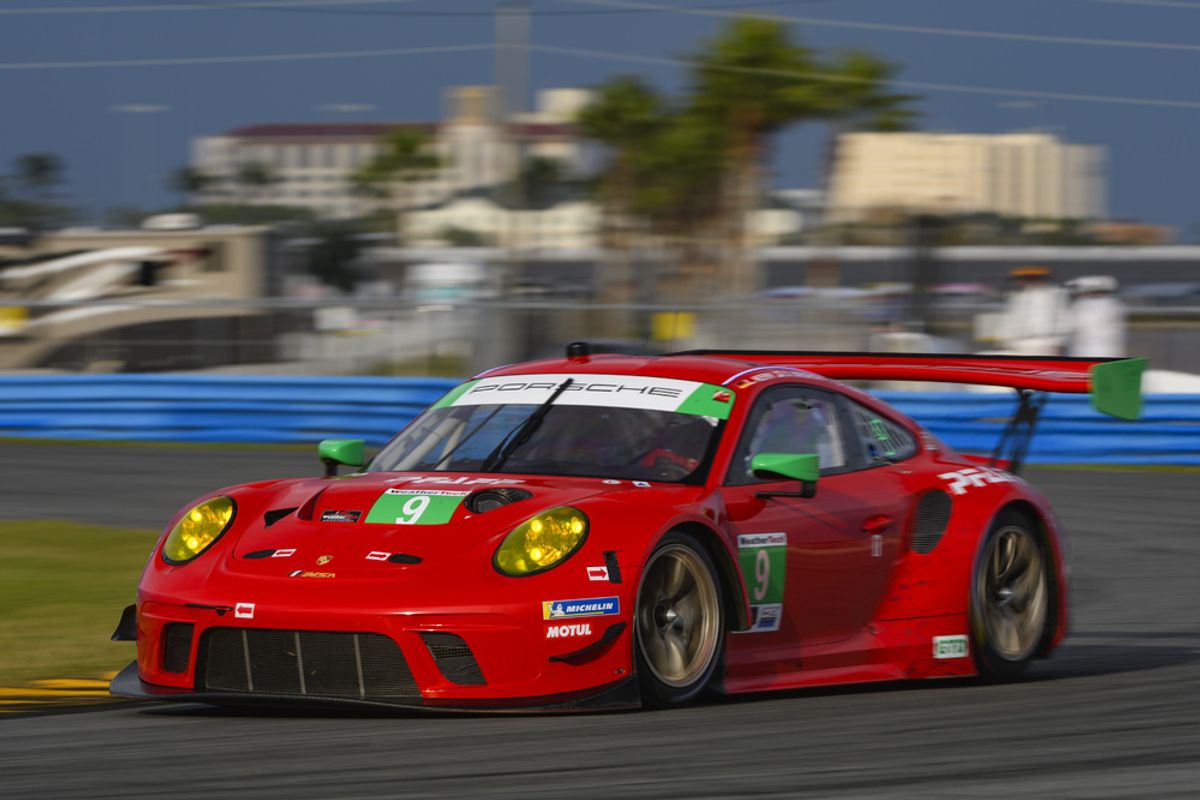 Porsche will tackle the 24 Hours of Daytona on 26/27 January fielding a pair of 911 RSR. As the most successful brand in the history of this venerable race, the sports car manufacturer from Weissach now aims to write another chapter in the success story at the season opener of this year’s IMSA SportsCar Championship. The two ca. 510 hp 911 RSR will be run by factory squads in the hotly contested GTLM class. The new Porsche 911 GT3 R celebrates its race debut. In the GTD category, four customer squads will each field one of the latest generation GT3 racers.

The race
The 24-hour race on the Daytona International Speedway is contested on a 5.73-kilometre-long combination of the tri-oval and a tight and twisty infield section. The storied event in Florida has been held every year since 1966. The endurance classic marks the start of the IMSA WeatherTech SportsCar Championship season and counts towards the North American Endurance Cup (NAEC).

The Porsche drivers
For the start of the 2019 motor racing year in North America, regular drivers Patrick Pilet (France) and Nick Tandy (Great Britain) share the No. 911 car, and like last year will be supported by Frédéric Makowiecki (France). In 2018, the trio won the long-distance races at Sebring and Road Atlanta. Earl Bamber (New Zealand), Laurens Vanthoor (Belgium) and Mathieu Jaminet from France share the cockpit of the No. 912 sister car campaigned by the Porsche GT Team. Works driver Patrick Long (USA) takes the wheel of the 911 GT3 R with the starting number 73 with his compatriots Nicholas Boulle and Patrick Lindsey as well as Porsche Young Professional Matt Campbell (Australia). In the identical No. 9 car sit Porsche development driver Lars Kern (Germany), Young Professional Dennis Olsen (Norway) and the two Canadians Scott Hargrove and Zacharie Robichon. The No. 99 Porsche 911 GT3 R is manned by works driver Sven Müller (Germany) and Klaus Bachler (Austria) as well as the Germans Steffen Görig, Alfred Renauer and Jürgen Häring. Sharing driving duties in the No. 540 vehicle are works driver Dirk Werner (Germany), Young Professional Matteo Cairoli (Italy), Marco Seefried (Germany) and Timothy Pappas from America.

Porsche’s Daytona successes
In the long history of the 24 Hours of Daytona spanning more than 50 years, no other manufacturer has enjoyed as much success as Porsche. 18 overall victories, four more as engine partner, and a record-setting 77 class wins remain unrivalled. Five outright victories in the years 1973, 1975, 1977, 1979 and 1991 and a class win in 1972 make US racing legend Hurley Haywood the most successful Porsche driver at Daytona.

The Porsche vehicles
For its third race season, the Porsche 911 RSR has undergone further optimisation primarily in the setup. Depending on the size of the restrictor, the engine, which is positioned in front of the rear axle, puts out around 375 kW (510 hp). The large rear diffuser combined with a top-mounted rear wing provides aerodynamic efficiency and significant downforce. The 911 GT3 R was newly developed for the 2019 season. Improvements in the areas of aerodynamics and kinematics were systematically implemented from the insights garnered from the many race outings of its predecessor. The six-cylinder engine in the rear of the GT3 customer racer produces over 368 kW (500 hp).

The schedule
The race gets underway on Saturday, 26 January, at 20:40 hrs (CET). The race can be watched live outside the USA and Canada at www.imsa.com.

Comments before the race
Fritz Enzinger (Head of Motorsport): “The season in North America always takes off with this great classic at Daytona. The race is a highlight that we definitely want to win this year with our superbly-engineered 911 RSR. Porsche is the most successful manufacturer at the 24-hour race in Florida. We sincerely hope that we can continue this success streak. The tests were promising. The entire team is well on track.”

Pascal Zurlinden (Director GT Factory Motorsport): “We have some unfinished business in Daytona from last year. We won all the other major races except the 24-hour classic in Florida. This has to change in 2019. Our sights are firmly set on winning. Our car has been perfected and tested, the team and the drivers are the very best. So we’ve taken all steps for a successful performance. We’re also looking forward to seeing our customer teams compete with the new 911 GT3 R for the first time.”

Steffen Höllwarth (Program Manager 911 RSR IMSA SportsCar Championship): “We struggled with several problems at Daytona last year. These things should now be sorted out. The test underlined that all manufacturers in the GTLM class are still very close. So, for 2019, the name of the game will again be: the winner will be the one who makes the least mistakes. We hope that’s us, because we want to settle a score at Daytona.”

Sebastian Golz (Project Manager 911 GT3 R): “We have high expectations. We’ve finished developing the new car, the first four customer teams tackle Daytona with the new 911 GT3 R. The pit crews and driver pairings are very good, so we can head into the race feeling optimistic. We all made good progress during the tests. If this trend continues, then I’m confident that we’ll ultimately see a strong result.”

Patrick Pilet (Porsche 911 RSR #911): “It’s important that we bring home the best possible result at the start of the season. Obviously we would like to win. Daytona is the most important 24-hour race in North America. That motivates the team and all the drivers even more. With our Porsche 911 RSR and the experienced squad, we have every chance to fight for victory.”

Nick Tandy (Porsche 911 RSR #911): “The 24 Hours of Daytona is one of the world’s greatest endurance races. This alone makes the event immensely important for us. What’s more, this race opens the IMSA season, so it’s really important to earn as many points as possible here. Our Porsche 911 RSR is in its third year. We know everything about this car. That’ll help us. We won the major races at Sebring and Road Atlanta last year. Now it’s time to do the same at Daytona.”

Frédéric Makowiecki (Porsche 911 RSR #911): “In this constellation, we achieved some great successes last year. I’d like to see this continue at Daytona in 2019. At the test, we saw that we’re very well prepared with our tried-and-true 911 RSR. We should be able to maintain a good speed over the distance. It’s important that we don’t make any mistakes. If we can drive a clean race, then definitely anything is possible.”

Laurens Vanthoor (Porsche 911 RSR #912): “At last it’s starting again! I can hardly wait for the IMSA series to take off. We’re well prepared for the tough competition with our Porsche 911 RSR. My dream is to win the world’s top four 24-hour races. I did it at Le Mans, at the Nürburgring and in Spa-Francorchamps. Only Daytona is missing on my list of victories. I’d very much like to tick it off.”

Earl Bamber (Porsche 911 RSR #912): “It’s great to contest all races with Laurens again this year. We’re a perfect combination. They say that becoming a father makes a racing driver slower. That definitely won’t be the case with Larry. He’ll probably press the throttle pedal even harder. And, we have a very competitive car. If we drive a flawless race, we should be able to fight for victory no matter where – including, of course, the 24 Hours of Daytona.”

Mathieu Jaminet (Porsche 911 RSR #912): “I’m thrilled to get another opportunity to drive the 912 car at the long-distance races in the USA with my colleagues. If you look at the previous races in Daytona, you see that it must be Porsche’s turn to win again. We have a strong team and a fast and consistent car. The prerequisites for a win at the 24-hour race are therefore in place.”

Dennis Olsen (Porsche 911 GT3 R #9): “Our Pfaff Motorsports team is very strong, but Daytona is new territory for us all. And this, of course, is a big challenge. But we certainly have enormous potential – in terms of the team, the car and the drivers. If we can make the most out of this and get through the first 23 hours of the race without mishap, then anything is possible. We will do our best to finish as far up the front as possible.”

Matt Campbell (Porsche 911 GT3 R #73): “I’m not really sure what to expect. This is my first time contesting the Daytona classic. During the test I familiarised myself with the new car, with my Park Place Motorsports team and the racetrack, so I’m not expecting any difficulties. We want to do the best possible job. If we manage to do this, then let’s see what result comes out in the end.”

Sven Müller (Porsche 911 GT3 R #99): “Daytona is a sensational racetrack, and the event is simply fantastic. I’m very excited. It’s hard to describe our expectations. The car is brand new, and we still have a lot to learn. NGT Motorsports is one of the few teams to compete with a five-man crew. There are pros and cons to this. Let’s see what we can achieve in the tough GTD-class fight.”

Matteo Cairoli (Porsche 911 GT3 R #540): “The Black Swan Racing environment is still very new for me. The squad is strong, and our drivers are also impressive. We have a bit of work to do on the setup of the Porsche 911 GT3 R. I’m confident that we’ll make good progress. Then nothing stands in the way of a good race result.”