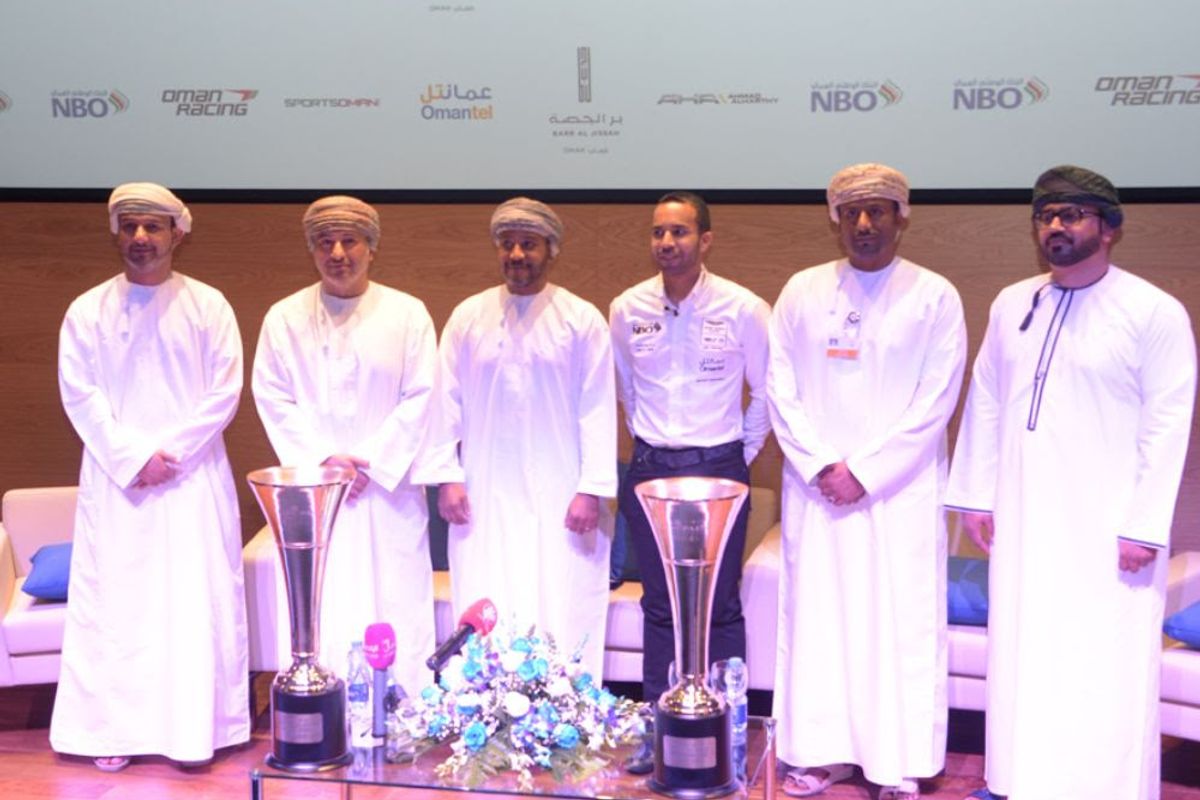 Omani racing driver Ahmad Al Harthy this morning, Monday, 18th March, officially revealed his 2019 season during a special press conference at the brand new head office of the National Bank of Oman in Muscat – confirming a return to the Pro-Am class in the high-profile Blancpain Endurance Cup.

Delighted to be mounting a challenge in Pro-Am once again, where he and the Oman Racing team won a history-making championship crown in 2017, Al Harthy today confirmed the latest generation Aston Martin Vantage GT3 of Oman Racing will once again be run by British squad TF Sport.

Al Harthy’s team-mates for the new Blancpain season have also been confirmed with Northern Ireland’s Charlie Eastwood, who raced as part of the squad’s Silver class line-up last year, continuing with Oman Racing.

Salih Yoluc, who was part of the team’s Pro-Am podium finishing line-up in the Total 24 Hours of Spa in 2017, returns to the squad for the full season this year and the Turkish driver will bring additional experience from the FIA World Endurance Championship and Le Mans 24 Hours.

Notably, the 2019 season marks the 10th anniversary of the partnership between Al Harthy and the National Bank of Oman and the Sultanate’s first local bank – founded in 1973 – has enhanced its association with Oman Racing as a result into the landmark year.

Importantly, the Oman Ministry of Sports Affairs also continues its long-standing support as a key partner of Al Harthy into 2019 as does Omantel and Barr Al Jissah, completing a strong and highly prestigious sponsorship portfolio once again.

“We’re very excited to have launched our season at the new head office of the National Bank of Oman today, and I’m very proud to be flying the flag for Oman again in the Pro-Am class of the Blancpain Endurance Cup”, said a very happy Al Harthy, “Oman Racing is again partnering with TF Sport and we’re very excited to be challenging in the brand new Aston Martin Vantage GT3.

“We obviously have some great memories of Pro-Am from 2017 when we won the championship, and we’re determined Oman Racing will again be in a position to challenge for the title this season with our new line-up. I’m very pleased Charlie [Eastwood] is continuing with us for a second season, and it’s great to see Salih [Yoluc] back with us for the full championship.”

Al Harthy added: “Of course, I am delighted to retain the incredible support of the Oman Ministry of Sports Affairs, National Bank of Oman, Omantel and Barr Al Jissah who have all been a key part of our journey for a long time. It’s wonderful in our 10th year of partnership to have enhanced support from the National Bank of Oman this year, a season we intend to be a very successful one.”

Oman Racing welcomes continued key partnerships for Pro-Am return
Alongside the increased support of the National Bank of Oman for the eagerly awaited new Blancpain Endurance Cup season, Al Harthy heads into his new campaign in the world’s biggest and most competitive GT3 racing championship with a very prestigious portfolio of backing.

Speaking on the National Bank of Oman’s renewed support, Sayyid Wasfi Jamshid Al Said, Acting Chief Executive Officer of NBO, said: “This is a very important year for NBO and Oman Racing, our 10th year of partnership with Ahmad, and we are delighted to have enhanced our support for the coming season. Ahmad is a wonderful ambassador for NBO and plays a key role in championing values of integrity, responsibility and corporate citizenship. He is a very important role model for the youth of Oman and together we seek to inspire all generations.”

On behalf of the Oman Ministry of Sports Affairs, the Assistant Director General of Sports Development and Welfare, Hisham Al Sinari, commented: “We have been very proud to be an integral part of Ahmad’s motor racing career for many years and we are delighted to continue our support once again. The partnership has been extremely successful for everyone involved and we look forward to celebrating more success together this year. Ahmad is a great ambassador for Oman and a true beacon for everything our country has to offer.”

Ali Bakhit Kashoob, Senior Manager at Omantel said: “We are again very happy to continue our partnership with Ahmad for the coming year and delighted to be part of Oman Racing’s new season. It has always been the case Omantel has been a keen supporter of Ahmad’s racing, and of his course his many successes, and we are very proud to once again be a key partner.”

Speaking on behalf of Barr Al Jissah, CEO Firas Matraji commented: “It has been a great pleasure to partner with Ahmad over the last few years and we are again proud to be associated this season. We continue to share the same focus and determination to promote Oman as a hugely desirable destination for leisure, tourism and business, which is why our partnership is so successful and continues this year.”

The new Blancpain Endurance Cup season will get underway over the weekend 13th/14th April at Monza in Italy and will conclude on 29th September at the Circuit de Catalunya in Barcelona, Spain.