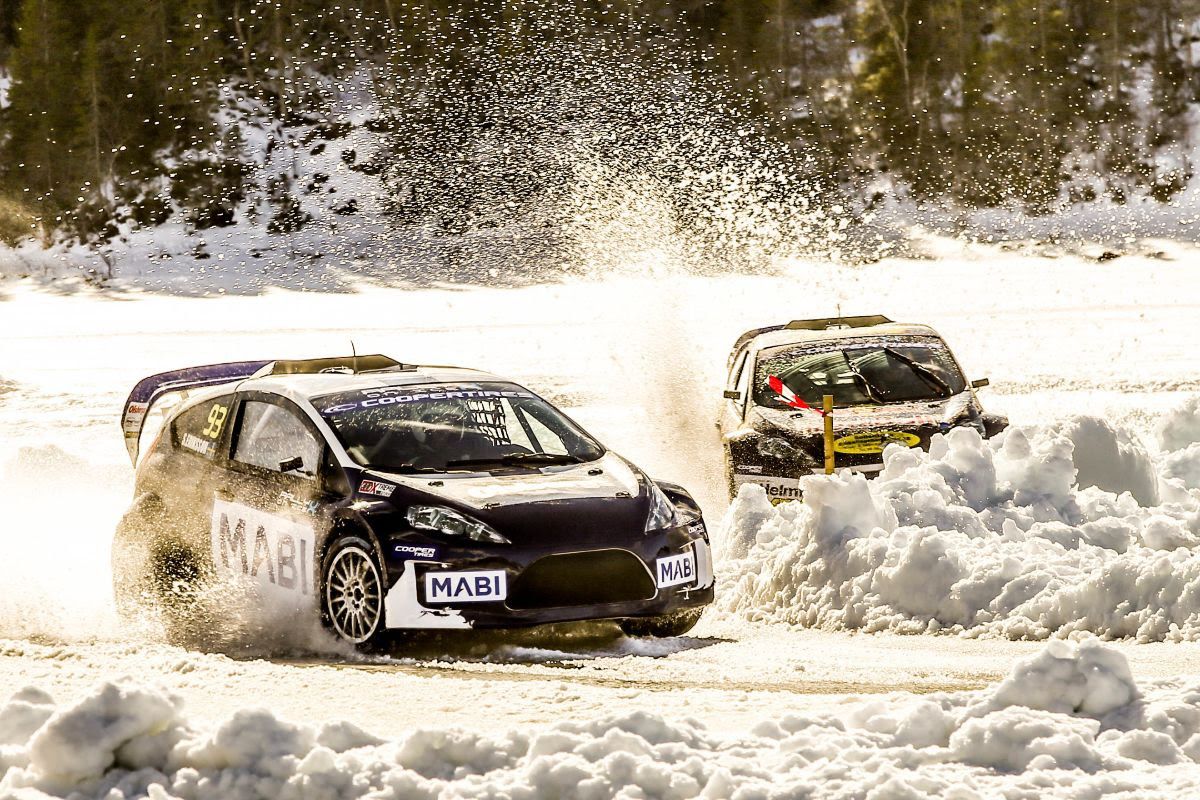 Sebastian Eriksson is the 2019 RallyX on Ice presented by Cooper Tires Champion after dominating the final day of competition today (23 March), but it was arguably CrossCar driver Linda Johansson who drew the biggest plaudits as she made history in becoming the first female winner in the series’ history.

All three rounds of RallyX on Ice – the ultimate winter motorsport festival – were won by a driver bearing the surname Eriksson, with Sebastian triumphing on Monday (18 March) before Oliver hit back on Wednesday (20 March), defeating older brother Kevin by less than five hundredths-of-a-second in a breathtaking photo-finish.

That left the trio – all competing for Swedish rallycross powerhouse Olsbergs MSE – separated by just two points heading into today’s final day decider, setting the scene for a spectacular scrap for supremacy on Sweden’s frozen Lake Åre. When they were all drawn in the same race for Q2 – quite literally side-by-side – it was clear it was going to be a no-holds-barred battle.

Reigning RX2 International Series Champion Oliver Eriksson was the first to falter. Hung out to dry on the outside line at the start of Q1 and carrying damage, the 20-year-old then did well to hold onto a tank-slapper slide later on. With both of his title rivals comfortably winning their respective races, the youngest Eriksson found himself facing an uphill battle – doubly so when Q3 was cancelled due to deteriorating conditions. His challenge was ultimately curtailed when he went off during a bruising semi-final.

Kevin Eriksson kept pace-setting namesake Sebastian Eriksson honest throughout the qualifiers, placing third in the intermediate rankings to join his countryman on the front row of the grid for the first semi-final. There, however, his bid for glory ended, coming off second-best in a duel with fellow FIA World Rallycross Championship race-winner Andreas Bakkerud as the pair disputed the last final spot.

Nonetheless, his results over the course of the week – third on Monday and second on Wednesday – were sufficient to secure Kevin the runner-up laurels in the overall standings, behind Sebastian Eriksson and ahead of Ben-Philip Gundersen.

The Norwegian got stronger with every passing race for JC Raceteknik, displaying sensational form today to win both of his qualifiers and semi-final before grabbing the lead at the start of the final from second on the grid. Whilst ultimately forced to submit to Sebastian Eriksson’s irresistible attack, Gundersen was pleased to reach the rostrum and snatch third position in the points table from defending champion Oliver Eriksson right at the end.

Nobody, however, could ultimately hold a candle to Sebastian Eriksson, with the Swede’s disagreement with a snow bank in Wednesday’s final the only real blot on an almost impeccable copybook. The 26-year-old – RallyX on Ice Champion in 2015 – similarly won the SM Veckan Swedish Winter Championship last month, making him the indisputable king of the ice right now.

OMSE’s Cole Keatts completed Saturday’s Supercar Lites podium with an excellent third-place finish. The American teenager had demonstrated his raw speed from the outset – confidently leading his semi-final on Monday until he struck a snow bank in the limited visibility – and he converted his stellar starts into a well-deserved rostrum result on the last day, despite driving most of the final with a bent rear wheel following first corner contact.

Gundersen’s JC Raceteknik team-mate and compatriot Sondre Evjen raced to the runner-up laurels on Monday, but struggled on Wednesday and a nightmare Saturday saw him uncharacteristically fail to reach the semi-final stage as he found himself unable to settle into a rhythm.

Fellow Norwegian Petter Leirhol faced similar disappointment, winning both of his qualifiers on Monday but not starting the final after a technical issue. He then helplessly ploughed into the side of a sliding Gundersen on Wednesday and ended up in a snow bank.

Former Junior WRC and WRC2 Champion Pontus Tidemand – who contested a part-season in the FIA World Rallycross Championship in 2014 – was on fine form on Monday, setting a startling pace in Q2 to top the timesheets despite having to serve two joker laps for a jump-start. For every chequered flag, however, there also seemed to be a snow bank, as well as a notable wheel-banging clash with Oliver Eriksson on the run to the finish line on Wednesday. Fifth place would prove to be the Swede’s best result.

Martin Jonsson saved his best until last with a superb effort to reach the final for the first time in his fledgling rallycross career on Saturday, the inexperienced racer pressuring Gundersen and outperforming Bakkerud along the way. He ultimately wound up fourth – just three seconds shy of the podium – matching the result achieved by Ole Henry Steinsholt on Monday.

Steinsholt uniquely contested both the headlining Supercar Lites category and supporting CrossCar class in Åre, taking two podiums in the latter, as did Linda Johansson, whose commanding victory on Wednesday was the first for a female competitor in RallyX on Ice history. The 29-year-old Swede continued to show her pursuers a clean pair of wheels today, only to hit a puddle in the semi-final and aquaplane off from the lead, ruling her out of the final – and title contention. Her breakthrough performance had nonetheless not gone unnoticed.

The other winners in the CrossCar category were Max Rundberg in round one and Julle Ljungdahl in round three. The latter – competing for the Hansen brothers’ new Yellow Squad – proved unbeatable in Monday’s qualifying races but could only manage fourth place in the final. He then found himself squeezed into a snow bank in Wednesday’s semi-final, but came out fighting on Saturday and – with a dominant display – duly won both the battle and the war.

Rundberg and Johansson ultimately wound up second and third in the outright classification, with others to shine including Isac Egonsson and former FIA World Rallycross Championship star Lukács ‘Csucsu’ Kornél, the Hungarian denied a rostrum result in round one by a last lap mechanical issue but making up for it by speeding to the runner-up spoils in round two.

Sebastian Eriksson (Champion, Supercar Lites):
“It’s been a perfect day for me – to take a clean sweep from the first qualifying race through to the final is fantastic. After winning on Monday, Wednesday didn’t go so well; I lost too much ground in the semi-final, and you really need to start towards the front in the final in these conditions. Other than that, I really can’t complain. I’ve loved every moment of RallyX on Ice – I think every week should be like this! Two titles in as many months – this year really couldn’t have started any better.”

Kevin Eriksson (2nd, Supercar Lites):
“It’s been a great week of racing, despite the fact that it didn’t end the way I wanted it to today, and to go home with second place in the championship is of course a good result. I would have loved to have been able to push Seb all the way to the chequered flag, but on this occasion it wasn’t to be. Huge congratulations to him – he’s driven brilliantly all week – and big thanks to everybody involved for making sure we all had a great time despite the less-than-ideal weather!”

Ben-Philip Gundersen (3rd, Supercar Lites):
“It feels great! I really didn’t expect to finish third in the championship after our slow start to the week. It took me a while to settle into the groove on Monday, but things began to improve on Wednesday and then today, it all just clicked and I was properly ‘in the zone’. They were probably the craziest conditions I’ve ever raced in, and being out in front really helped. I led every race I started today, and the only one I didn’t win was the final – but Sebastian [Eriksson] was just too quick for any of us here. I could feel him pushing me and knew it would be extremely difficult to keep him behind. Still, I’m very happy with second place – and a top three championship finish is the icing on the cake.”

Julle Ljungdahl (Champion, CrossCar):
“What a week! It’s been amazing. I had a few problems over the course of the first two rounds, but today has just been perfect. I was playing catch-up in the championship coming into the day, but you always have to believe it’s possible and it’s not in my nature to give up. I actually struggled a little to find my rhythm during the warm-up, but from the moment the lights went out in Q1, everything just came together. This is the best possible way to start the year – now we need to carry on working hard to keep the momentum going into the summer season.”