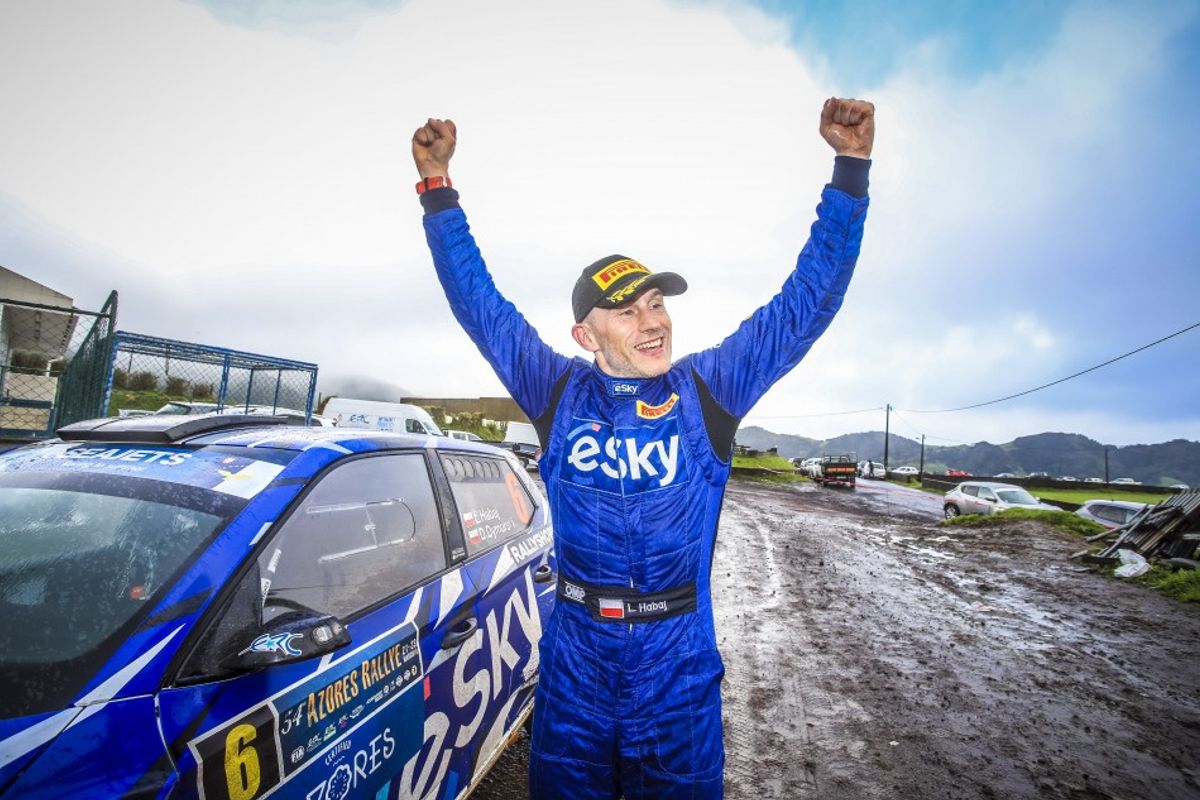 Łukasz Habaj and Daniel Dymurski battled the elements to claim a sensational maiden victory in the FIA European Rally Championship, snatching top spot from reigning champions Alexey Lukyanuk and Alexey Arnautov during a dramatic final afternoon on the Azores Rallye.

Lukyanuk was on course for his second consecutive Azores win only to pick up a puncture on the penultimate stage, handing first place to Habaj and dropping to third behind local hero Ricardo Moura. But the flailing rubber from his punctured tyre had damaged his Citroën C3 R5’s braking and resulted in the unsuspecting Russian suffering a huge accident at the first corner of the event-closing Tronqueira stage.

Although Lukyanuk and co-driver Arnautov were uninjured, their all-new Saintéloc Racing-prepared C3 suffered extensive damage. But while Lukyanuk was left to reflect on what might have been, Habaj became the first Polish driver to win in the Azores and the first driver from his country to win in the ERC since Kajetan Kajetantowicz triumphed on the Acropolis Rally in Greece 657 days ago. And by leading through the final stage, Habaj joins compatriots Kajetanwoicz and Robert Kubica by heading the field in the Azores.

“The final stage was crazy, the most difficult stage I have ever done,” said the 2015 Polish champion, who was driving a ŠKODA Fabia R5 for Sports Racing Technologies. “I can’t believe it but we had good pace all week. The key to the victory was yesterday. I was afraid of those stages the most but in the end it worked out well. I am sorry for Alexey because he was the fastest all weekend but this is rally. This victory was not just luck, there was a lot of hard work behind it and I want to thank my family, my team for the car and Pirelli for the tyres.”

There was a first ERC3 and ERC3 Junior victory for Rally Team Spain’s Efrén Llarena, who broke down in tears at the finish of the final stage, such was the enormity of his achievement in the Pirelli-supported category. Sindre Furuseth completed the closing test second in class, despite an engine mounting issue causing a scare and necessitating roadside repairs to enable the Norwegian to reach the podium in Ponta Delgada. An ill Elias Lundberg took third on his ERC debut for the ADAC Opel Rallye Junior Team. A full ERC3 report is available here.

Juan Carlos Alonso beat Sergey Remennik to ERC2 honours after both drivers overcame a succession of issues, Remennik going slowly to the finish with a transmission issue.

Ingram started leg two in second place, nearly half a minute behind Team OSCARO-backed driver Pierre-Louis Loubet. But his fellow ŠKODA Fabia R5-driving rival hit trouble almost immediately, his car suffering a water pump failure at the end of Graminhais that forced him to retire.

From there Ingram was unchallenged and headed a 1-2 finish for his Toksport team, with Cypriot Alexandros Tsouloftas finishing in second place on his Azores debut. “That was the most difficult weekend ever,” said Ingram. “It’s been the most difficult Azores I’ve ever done. There were so many mistakes from me. I should have been more relaxed, I shouldn’t have been chasing it.”

With ERC1 Junior in the bag, Ingram's next target was his first outright Azores podium – one he eventually got when Alexey Lukyanuk rolled out on the final stage – despite taking hard tyres in the hope it would be drier than expected. “We’ve been on a hard tyre which in these conditions isn’t the best idea, but I’m really happy to have won ERC1 Junior. We were fifth overnight and we don’t want to be fifth, so we knew everyone else would be on the soft tyre so we took hards as a gamble.”

It was also a great start to 2019 for Tsouloftas, who began his ERC1 Junior campaign with second place.

“Wow, what a rally! I never thought about it being this difficult,” he said. “I’m really happy being second on the podium and those points for the ERC1 Junior, I’m really happy.”

Miguel Correia completed the ERC1 Junior podium for ARC Sport, although he suffered a near miss by damaging his Ford Fiesta R5 on the final stage, to the point the door handle fell off the passenger-side door on his second start in an R5 car.

Sweden National Team’s Mattias Adielsson had lost 10 minutes through retiring with an electrical issue on Thursday but came back to finish fourth, though like Correia, suffered last minute drama. He clipped a bank on Tronqueira, the final stage of the rally, squashing his exhaust to the point his car was not able to drive. Adielsson used the wheel-jack in the boot of his Saintéloc Racing-prepared Citroën C3 R5 to try and open it up, but eventually resorted to punching a hole through the exhaust with a screwdriver. The Swede eventually finished the stage eight minutes down on Ingram but successfully collected points for fourth.

Pedro Almeida also returned under Rally2 on Saturday but retired on Vila Franca-São Bras, his ŠKODA Fabia R5 making contact with a solid object and breaking the rear suspension.

ERC2: Alonso doubles up in the Azores
Juan Carlos Alonso began his campaign in the FIA European Rally Championship’s ERC2 category in style with a second consecutive win on the Azores Rallye.

Alonso had been fighting tooth and nail with ERC2 sparring partner Sergei Remennik on Thursday, with the pair swapping tenths of a second and the lead.

Disaster had hit Alonso with technical issues and punctures on Friday morning but come the afternoon it was Remennik’s turn to suffer, culminating with a retirement on Friday’s last stage, the Marques superspecial due to an electrical issue.

With Remennik picking up a penalty for returning under Rally2 rules, Alonso held a comfortable lead throughout Saturday’s five stages, only winning the rally-ending Tronqueira test while Remennik went fastest on the other four. “What a weekend! We never give up in our fight to be here with a long trip from my country,” said Alonso, who hails from Argentina. “It was a fantastic fight with Sergei on the first day. We are here, we win Azores Rallye for ERC2 back to back, two times in a row. I have to say thanks to my co-driver [Juan Pablo Monasterolo] for his wonderful work, my team and my family.”

Remennik’s engine had refused to turn over and start on the start line of Marques on Friday evening, the reason for his retirement only becoming clear later on at service. “A shorted fuse caused a problem with the electrics. It burned out but it was the first time this has happened, so I didn’t understand what happened,” he explained.