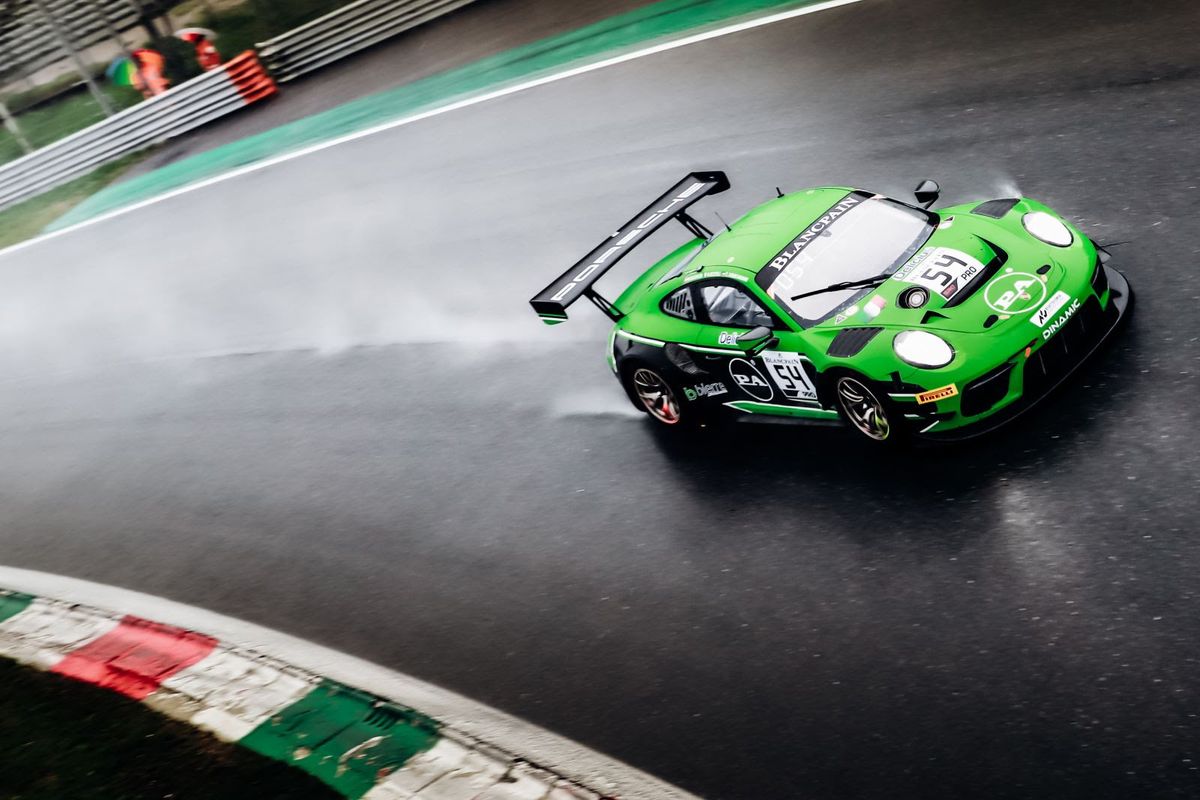 in dramatic 2019 season-opener at Monza

The series newcomer toppled the established order by triumphing on home soil to spark emotional sconces in the garage, giving the Porsche brand its first Endurance Cup victory since 2012 in the process.
The win came in uniquely challenging conditions as heavy rain overnight and throughout Sunday morning left Monza soaked for the race start.
While this would prove the undoing of some, it gave the Dinamic squad a platform to excel. The #54 Porsche started from 23rd on the grid and amid a torrent of spray, but the experienced Rizzoli kept his cool during the opening stint to hand the car to Ashkanani in a promising position.

The Kuwaiti driver was making his series debut at Monza, but this did not show as he fought his way past a number of Blancpain GT Series veterans and remained unphased through a number of safety car periods.
Austrian ace Bachler took the controls for the deciding stint in second spot, with the #25 Sainteloc Racing Audi R8 LMS leading by four seconds as the race reached the decisive last 20 minutes.

As the stint evolved Bachler began to take the upper hand, the Sainteloc-Audi struggling for pace and soon calling into the pits. The Dinamic-Porsche had no such problems and assumed the lead, from where Bachler expertly managed the closing stages to take a superb victory.
He was followed home by the #563 Orange1 FFF Racing Team Lamborghini Huracan GT3 machine, driven for the final stint by Marco Mapelli, after an eventful outing for the Chinese squad.

Like the Dinamic outfit FFF Racing was making its series debut at Monza having graduated from a title-winning Blancpain GT Series Asia campaign. Dennis Lind was ultra-competitive during the opening hour, while team co-owner Andrea Caldarelli managed the middle stint before handing over to Mapelli. Like Dinamic, it represented a statement of intent from the newcomer.

The final spot on the podium belonged to the #4 Black Falcon Mercedes-AMG GT3 crew of Luca Stolz, Yelmer Buurman and Maro Engel. The reigning Endurance Cup champions had seemed out of contention after Stolz suffered contact during the opening stint but showed their title-winning prowess to climb the order back to third at the chequered flag.

They very nearly missed out on a podium finish, however, as the #90 AKKA ASP Team Mercedes-AMG GT3 of Felipe Fraga threatened to overtake Engel on the final lap. The Brazilian eventually settled for P4 and, most importantly, a Silver Cup victory for the car he shares with Nico Bastian and Timur Boguslavskiy. The French squad led overall during the early stages and confirmed its status as a Silver crew capable of troubling the overall podium contenders this season.

It capped a weekend on which a number of new squads signalled their intentions to fight for victory this season, pushing the standards of competition in the Blancpain GT Series to even greater levels. The next event on the schedule sees the Blancpain GT World Challenge Europe stage its maiden race, with Brands Hatch playing host to the sprint-format championship on 4/5 May.

The Endurance Cup will resume just one week later when Silverstone completes a British double-header on 11/12 May. The established Endurance outfits will look to strike back at the Northamptonshire venue, but the Monza contest has shown that there are several new contenders with major ambitions for the season ahead.

Andrea Rizzoli, #54 Dinamic Motorsport Porsche 911 GT3 R: "Honestly, I never thought I’d be coming through to win today! It was so difficult at the start, I just tried to do a safe, clean job and let my teammates do the work later on. They were so fast. It’s just incredible to be here, winning my first race in the Pro category."

Andrea Caldarelli, #563 Orange1 FFF Racing Team Lamborghini Huracan GT3: "This is extra special. It’s been difficult to manage the role of team owner and driver, but I still feel that when I get in the car there are no other thoughts. It was hard coming from Asia and setting up the team in a very short time, but we showed that what we did over there is possible in Europe as well. We weren’t the fastest, but we did fewer mistakes today."

Yelmer Buurman, #4 Black Falcon Mercedes-AMG GT3: "The whole weekend was tough for us. When I jumped in the car we were between P25 and P30, so to put your head down and go is not so easy. We kept on pushing though and the team made the right decision with the tyres. It was all about tyre management with the pressures and our strength was to save them for when we really needed them."

Felipe Fraga, #90 AKKA ASP Team Mercedes-AMG GT3: "It was really fun out there! The car was very good and we could fight for the overall podium today, but we just needed to do our job which was to win the Silver Cup. I had Black Falcon cars in front and behind me, so I had to manage the gap in case they tried to help each other. The team did a really nice job and I’m really proud to win for the first time in Europe."

Miguel Ramos, #77 Barwell Motorsport Lamborghini Huracan GT3: "I am very happy about this win. I can only congratulate Leo and Adrian, who did an incredible job, as did the whole team. I just had to keep the car on-track as we were a lap ahead of P2 in our class, so I was focusing on not making any mistakes."

Jonathan Hui, #93 Tempesta Racing Ferrari 488 GT3: "The conditions were really tricky, but this race was about survival and attrition so while trying to push as hard as we could we also focused on carrying on. There's a saying that to finish first, first you must finish. We benefitted from a bit of luck today but, overall, I’ll take it. Thanks to my team-mates and to AF Corse, and special thanks to Eddie Cheever who gave us a lot of great advice over the radio."