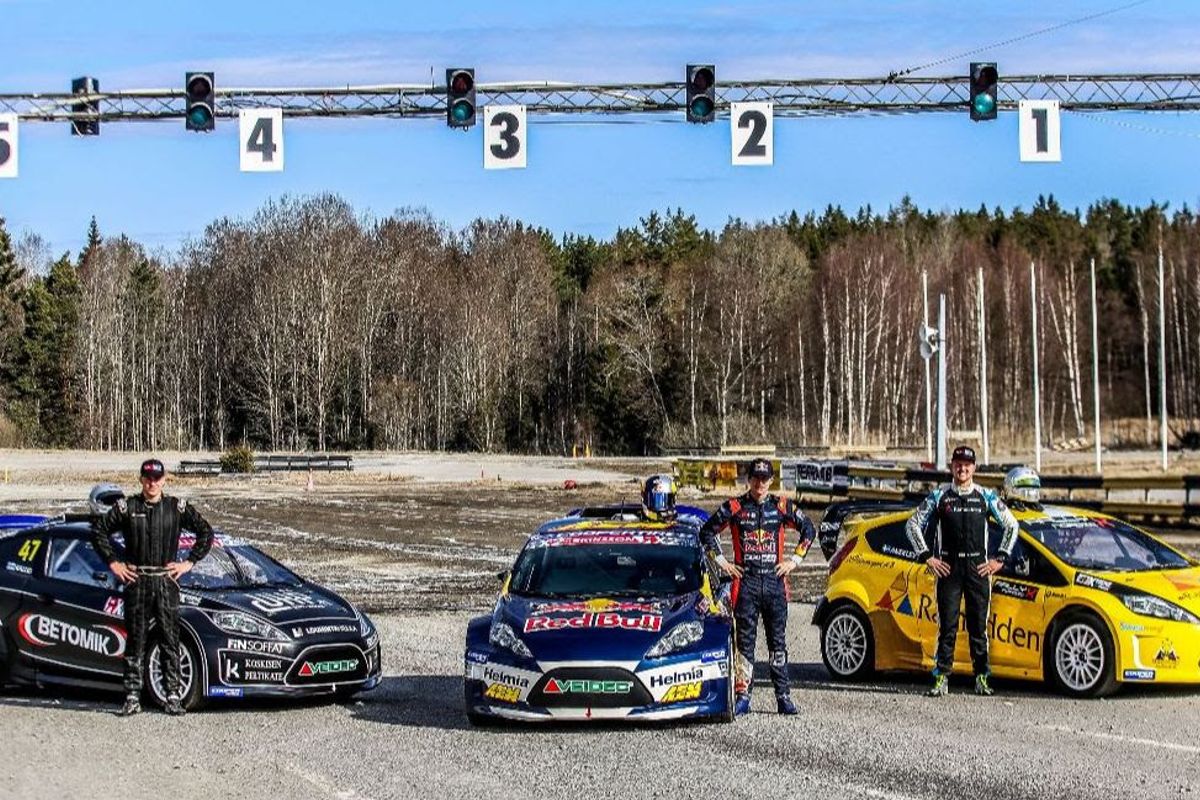 Swedish rallycross powerhouse Olsbergs MSE has officially revealed its complement of drivers for the 2019 rallycross season, with an eight-strong line-up of exciting young talent and experienced hands set to represent the team in RallyX Nordic and RX2.

In RallyX Nordic presented by Cooper Tires, Oliver Eriksson and Ulrik Linnemann will lead the headlining Supercar class charge, supported by Linus Östlund and Niklas Aneklev in the Supercar Lites category. One more Supercar driver will be announced at a later date.
Supercar Lites forms the basis for the RX2 International Series presented by Cooper Tires, in which Eriksson is set to return to defend his hard-fought 2018 drivers’ crown. The Swede will be partnered there by fast-rising Finnish hotshot Jesse Kallio and Jamaica’s Fraser McConnell.

Kevin Eriksson and namesake Sebastian Eriksson, meanwhile, are due to contest selected races with OMSE in 2019, with further information to follow in due course.

One of the hottest young prospects on the current rallycross scene, 20-year-old Oliver won RX2 at his first attempt in 2018, and also has GRC Lites and RallyX on Ice titles on his fast-growing career CV. Championship runner-up in RallyX Nordic last year, he has his sights set firmly on the main prize in 2019 and is similarly fired-up to retain his RX2 crown as he prepares for another busy dual campaign.

“I’m ready for revenge! We didn’t get off to a great start in RallyX Nordic last season, which left us playing catch-up. When you’re on the back foot like that, you have to take more risks and whilst we almost made it, close isn’t close enough. This year I want to be the hunted rather than the hunter. It’s obviously a challenge to switch between two different cars, but in my opinion they’re the best two rallycross cars around so I can hardly complain...”

The architect of a spectacular RallyX Nordic debut midway through 2018 – beating all the championship protagonists to win on home soil at Nysum – Ulrik is stepping into the series full-time this season after trying out OMSE’s Honda Civic at Tierp in October. He also impressed in FIA Euro RX last year, finishing sixth overall and reaching the final in the opening two rounds.

“Last year was quite a rollercoaster ride for me, so it’s exciting to have a full season in RallyX Nordic to look forward to. I’ve already spent a week at the OMSE workshop and am getting on well with everybody and feel confident inside the team. The competition is clearly going to be tough – and it’s getting tougher all the time in RallyX Nordic – but my aim is to finish inside the championship top three. We know the speed is there – now I just need to add consistency.”

Rising Swedish star Linus is six times a crosskart champion in his homeland, and made his Supercar Lites debut in RX2 in 2017, only just missing out on the final in an impressive performance. After sporadic outings in RallyX Nordic last year – allied to a fourth-place overall finish in the Swedish Championship – the 19-year-old is back for a full campaign in 2019 and aiming to make a fast start on home soil in next month’s Höljes double-header.

“It’s exciting to be contesting a full season in Supercar Lites. I had a great start in RallyX Nordic last year with second place at Höljes, but I knew it would be more of a challenge at the other tracks I didn’t know so well. Still, working alongside my OMSE team-mates, I learnt a lot and found some good pace. Hopefully that will enable me to be more consistent this year, and I can’t think of anywhere better to start the season, with the home crowd behind me and my family and friends cheering me on!”

A competitor in motorcycle enduro racing from a young age, Niklas is set to make his four-wheeled racing debut this year with OMSE in RallyX Nordic’s Supercar Lites class.

“I decided to make the switch because I was breaking too many bones on bikes, so I thought I should try to find something safer! I’ve always been attracted by the excitement of rallycross. I was in the crowd at Höljes last year and knew then that I wanted to race, but I never thought it would happen so quickly. It just goes to show what’s possible in rallycross. It’s going to be a learning year for me for sure, but I plan on learning quickly...”

Jesse has achieved success in every series he has entered, with consecutive titles in recent years in the RX Academy and RX Academy on Ice and a hard-fought victory in the Norwegian round of Euro RX’s Super1600 class last year. In 2019, the Finnish teenager will continue his apprenticeship in RX2 with reigning drivers’ and teams’ champions OMSE.

“I’m really excited – I can’t wait to hit the track in Barcelona! Today was my first time in the Supercar Lites car, and it’s a lot of fun to drive. The feeling is already good – I just need more laps to be fully confident. It’s clearly going to be a learning curve for me this year, but I want to be pushing for the podium – that has to be the goal. We’ll see where we are in Spain. If I can make it through to the final, anything is possible...”

A two-time ‘Jamaican Driver of the Year’, Fraser made his rallycross debut in 2018 after discovering the discipline on YouTube. Entering the inaugural ARX2 series in the United States, the 20-year-old reached the final four times out of five – highlighted by a podium finish in the season finale – en route to fourth in the overall standings. He will make his debut in RX2 alongside Eriksson and Kallio this year.

“Not only will it be my first time competing in RX2, but it will also be my first time going to Europe, which is very exciting! I know the competition is going to be tough, but I am up for the challenge and looking forward to working with such a great team as OMSE as I aim to hone my skills. I am already familiar with the Supercar Lites machinery from ARX2, and my goal is very clear – to give it my all and stand on the top step of the podium.”

A World RX race-winner – following that extraordinary round-the-outside overtake in Germany in 2016 – Kevin has three full seasons of top-level World Championship competition under his belt, as well as titles in both RallyX on Ice and RX Lites, the predecessor to RX2. An accomplished racer, the 22-year-old’s 2019 programme with OMSE will be announced in due course.

“We’re all working flat-out behind-the-scenes at OMSE to bounce back at the highest level. Last season in World RX was not what we had hoped for, so we decided to take a year out in 2019 – sometimes you have to take a step back to take a step forwards. We will re-evaluate and come back stronger. Of course I would rather be driving full-time as I’m hungry to compete, but I will still take part in some events and will prepare hard and stay in shape so that when the next opportunity comes up, I will be ready.”

Recently-crowned 2019 RallyX on Ice Champion, Sebastian is known in the sport as the ‘silent assassin’, underscoring the age-old saying that it is always the quiet ones you need to watch. He might not say much outside of the car, but inside the cockpit, he is as ruthless as they come – as his recent winter triumph goes to show. He also reached the final on his World RX debut on home turf in Sweden in 2016.

“I’m not sure exactly what I’ll be racing yet, but what is certain is that when I do race, I want to fight for victory! RallyX on Ice proved that I still know how to win, and putting in the hours at the workshop keeps me sharp technically, which is important. We have kept our heads down over the winter focussing on bringing updates to the cars, and when the opportunity comes, I plan to be ready to jump back into the car and be straight on the pace.”