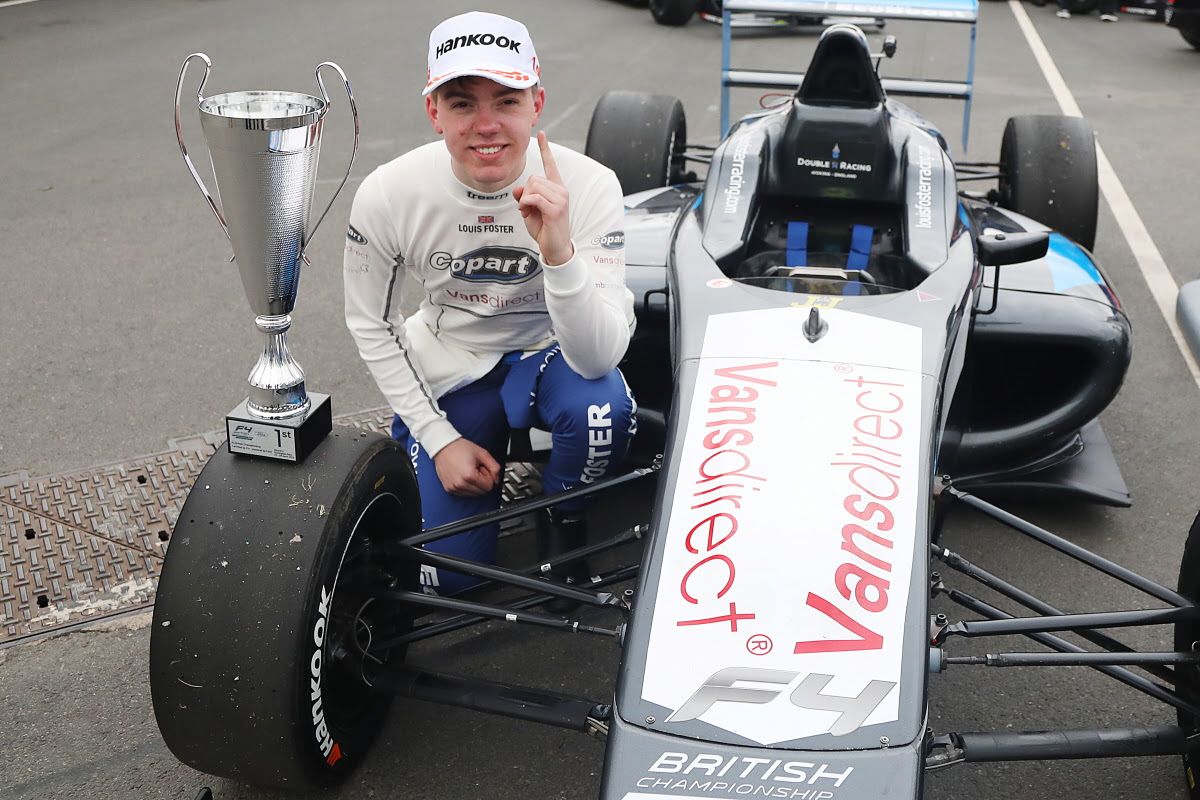 Ultra-impressive F4 British Championship certified by FIA powered by Ford EcoBoost rookie Louis Foster rocketed to the top of the driver standings at Donington Park over the weekend, 27th/28th April, with two race victories and a memorable hat-trick of podiums for Double R Racing.

Claiming his second win of 2019 in round four on Saturday afternoon, Foster went on to finish third in round five on Sunday – where he also posted the fastest lap of the race – and then emerged from a tense battle with team-mate Sebastian Alvarez in round six with his third victory of the season.

Mexican racer Alvarez, who arrived in Leicestershire with the championship lead, ended the second event of the year a comfortable second in the standings despite a challenging weekend. After being knocked out of third position in race one, he fought back to salvage points for ninth and then took fifth in race two, before just missing out on his second victory of the year in the final contest.

Reema Juffali continued her superb level of progression across the weekend, the Saudi Arabian making the second visit of her debut season in Formula 4 to the outright points-paying top 10 in round five. She book-ended the event with 12th place in race one, 11th position in race three.

“We’ve very happy with how the British F4 team performed at Donington this weekend”, said Double R team principal Anthony Hieatt, “It’s fantastic to take two more wins with Louis, great for him to be leading the championship so soon in his rookie season, and it was a tough battle between him and Sebastian in the final race.

“Sebastian was very unlucky in the first race, he deserved a podium there but he recovered well and it’s points finishes like those which can make all the difference at the end of the season. Reema has again impressed everyone with her development and progress, getting back into the points is great and she’s definitely improving with every outing.”

Podium glory in all three Donington races for Double R Racing
Qualifying on Saturday morning was affected by rain and several red flag stoppages, the last of which came late in the session. Foster was in superb form and performed exceptionally well in the tricky conditions to secure his first British F4 pole position by a full 0.4 seconds, having been fastest in officially timed testing too.

Team-mate Alvarez made it an all Double R front-row with his final lap of the session, notably 0.8 seconds clear of third. Juffali had an unfortunate excursion midway through qualifying, which did cause one of the red flags, but she ultimately ended up with the 12th quickest time.

Race one on Saturday afternoon, on a slippery track, started well with Foster and Alvarez both getting away cleanly from the line, running wheel-to-wheel through Redgate and Hollywood before Foster managed to maintain the lead. Unfortunately, though, an error into the chicane at the end of the lap meant Foster was a sitting duck into the second tour with five cars dicing at the front.

Edged to third on the run over the line and then down to fourth, with Alvarez moving into second and Josh Skelton taking the lead, Foster was determined to hit back and his cause was helped when team-mate Alvarez was knocked out of third at Redgate by Zane Maloney on lap three.

Alvarez was able to recover, down in 11th, and he ultimately salvaged a couple of points for ninth place at the end of 17 laps. Foster, meanwhile, climbed into second after the lap three dramas and started to close on leader Skelton. Running 1.8 seconds adrift into lap six, Foster started to eat into the gap and set fastest lap pace as he decimated the lead to nothing by the end of lap 10.

Searching every which way to find a suitable opportunity to try and pass, on lap 12 the Double R racer took the lead and immediately started to pull away to wrap-up his second win in as many events and, with it, the championship lead at that point.

Juffali produced a strong performance on her first time racing at Donington Park, putting together a good opening to round four and moving up into the points-paying top 10 by lap four. Although edged back to 11th place on lap nine, the Saudi Arabian continued to race well but an unfortunate excursion on lap 13 meant she lost more than 16 seconds and so ended the race back in 12th place.

Foster started the first of Sunday’s two races sixth on the grid and although edged back a place initially, he moved up into the top five prior to the deployment of the Safety Car on lap four, which then precipitated a red flag stoppage. Alvarez was seventh at the time of the red flags, having started ninth, and Juffali had moved up from 12th at the beginning into the top 10.

Following a fairly lengthy delay, the race was re-started over a duration of 15 minutes and all three Double R drivers managed to finish in the points. Foster worked his way through into the top three before the conclusion on lap nine, and set fastest lap, while Alvarez took fifth and Juffali 10th place to break back into the points.

For round six, Foster and Alvarez again headed the grid with the second Double R front row lock-out of the weekend thanks to their respective second best lap times in qualifying and Alvarez made the best start to grab the lead into Redgate, as Foster fended off Luke Browning to secure second.

Into lap two, the Double R team-mates were nose-to-tail before the Safety Car appeared following an accident out of the chicane. Racing resumed with less than 10 minutes left and Alvarez soaked up huge pressure as Foster searched for a way by. Sticking right in the Mexican’s wheeltracks, while also defending from Browning, Foster tried everything he could.

After the team-mates banged wheels out of McLeans late on, Foster lost momentum and slipped to third but he soon reclaimed second before Joe Turney then leap-frogged both at Coppice. Foster then passed Alvarez for second, before getting ahead of Turney for the lead on the penultimate tour.

Dramatically, Turney then collided with the rear of Foster’s car into Redgate but the Double R racer managed to hold onto the lead and Alvarez moved up to second to seal a fantastic one-two for the team. Juffali, who moved up into the championship points once again before the Safety Car period, unfortunately slipped to 12th after the re-start and eventually finished the race in 11th position.

British F4 will be back in action three weeks from now, on 18th/19th May, at the fastest track on the calendar – Thruxton Circuit in Hampshire.

On the very same weekend, Double R will also be back on track with its BRDC British Formula 3 Championship squad at Snetterton in Norfolk and the team will also be in action at Pau in France for the latest rounds of the Euroformula Open.