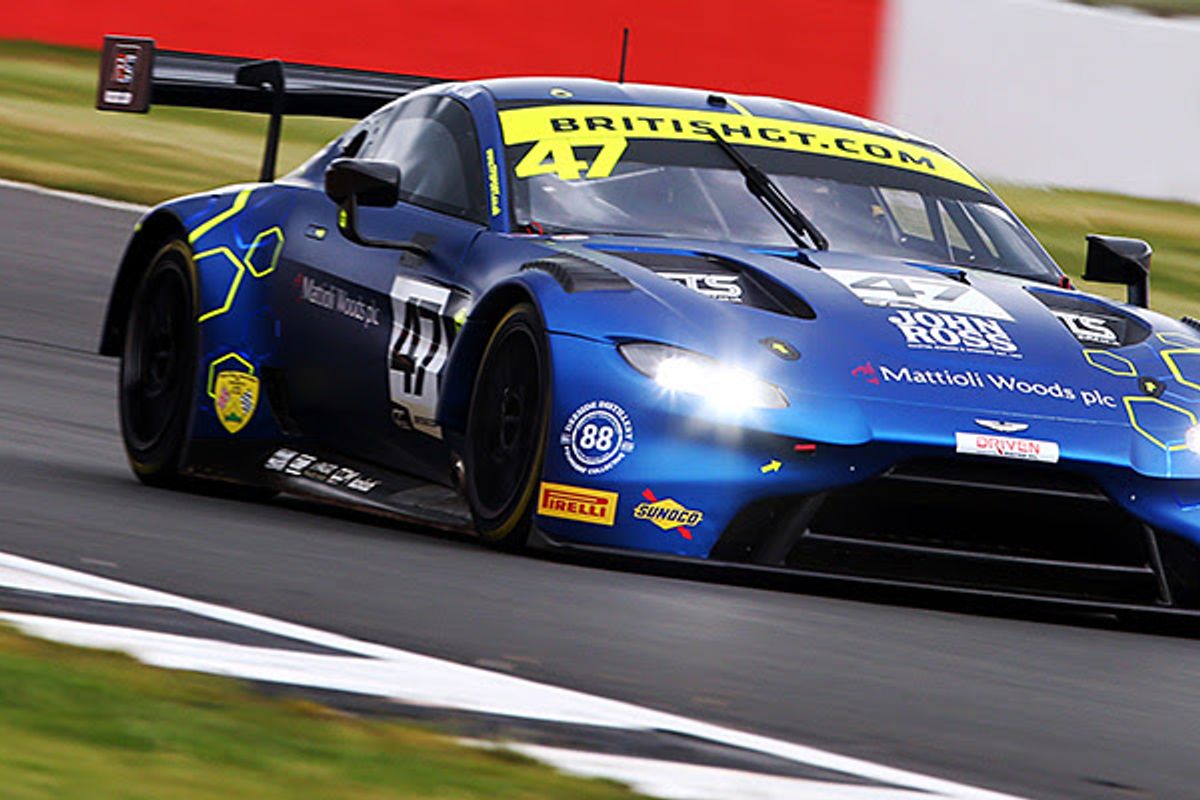 The #47 Aston Martin starts alongside RAM Racing’s Callum Macleod and Ian Loggie, who initially topped the Am session, and ahead of the Balfe Motorsport McLaren shared by Shaun Balfe and Rob Bell.

Elsewhere, Steller Performance’s Richard Williams and Sennan Fielding maintained their excellent start with Audi by claiming second ahead of Team Parker Racing’s Mercedes-AMG, which set fastest time of all in Scott Malvern’s hands.

An ultra-competitive opening session saw the top-three Ams separated by just 0.034s. Graham Davidson initially set the pace but was replaced almost immediately by Ian Loggie who lapped just 0.022s faster to give RAM Racing’s Mercedes-AMG a slender advantage ahead of Q2. Behind, Shaun Balfe made it a three-way fight for pole by circulating within four hundredths of Loggie.

Those three finished comfortably clear of Century’s Dominic Paul and TF Sport’s Mark Farmer, who were four-tenths shy of pole, while Optimum’s Ollie Wilkinson recovered to sixth after seeing his initial lap deleted for a track limits infringement.

A nail-biting finish looked likely as the Pros climbed aboard. But Jonny Adam had other ideas, the reigning champion essentially ending the contest by banging in a 2m00.327s on his first flying lap. It would remain the session’s benchmark and, crucially, swing pole the way of TF Sport’s #47 crew by 0.350s.

But there was disappointment for both Optimum and Team Parker whose Aston Martin and Bentley failed to complete a timed lap in the second session.

Team work makes the dream work, and that was very much the case at TF Sport whose drivers posted near-identical laps en route to their first GT4 pole positions.

Patrick Kibble laid the foundations by pacing the opening session by 0.5s, a performance made all the more remarkable considering the same margin covered the rest of the top-eight.

Century’s Angus Fender was best of the rest in second after beating Generation AMR SuperRacing’s Matt George and Tolman’s James Dorlin by a tenth. Richard Williams’ Steller Audi wasn’t too far behind in fifth while Scott Maxwell and Chad McCumbee made it a Multimatic Mustang six-seven ahead of championship leader Callum Pointon (HHC McLaren).
Balfe Motorsport’s Graham Johnson finished fastest of the Am contingent in 15th after lapping 1.4s slower than Kibble.

British GT’s combined qualifying format for its endurance races always ensures the fastest drivers go second, which can often shake up the order. And so it proved.
The exception to that rule involved TF Sport, which retained its half-second advantage over the rest of the field when Josh Price lapped just 0.001s shy of his co-driver.

The #95 crew start alongside Steller’s Audi, which jumped from fifth to second courtesy of Sennan Fielding’s time in the second session. However, his effort was eclipsed by Scott Malvern whose banzai lap – 0.6s faster than anyone else – vaulted the Team Parker Mercedes-AMG he shares with Nick Jones from 19th to third.

Elsewhere, track limits infringements dropped Tolman’s #5 McLaren from 11th to the back of the grid post-session.

All Pitstop Success Penalties must be served during the third mandatory driver change.