Drive your car on the legendary Spa circuit 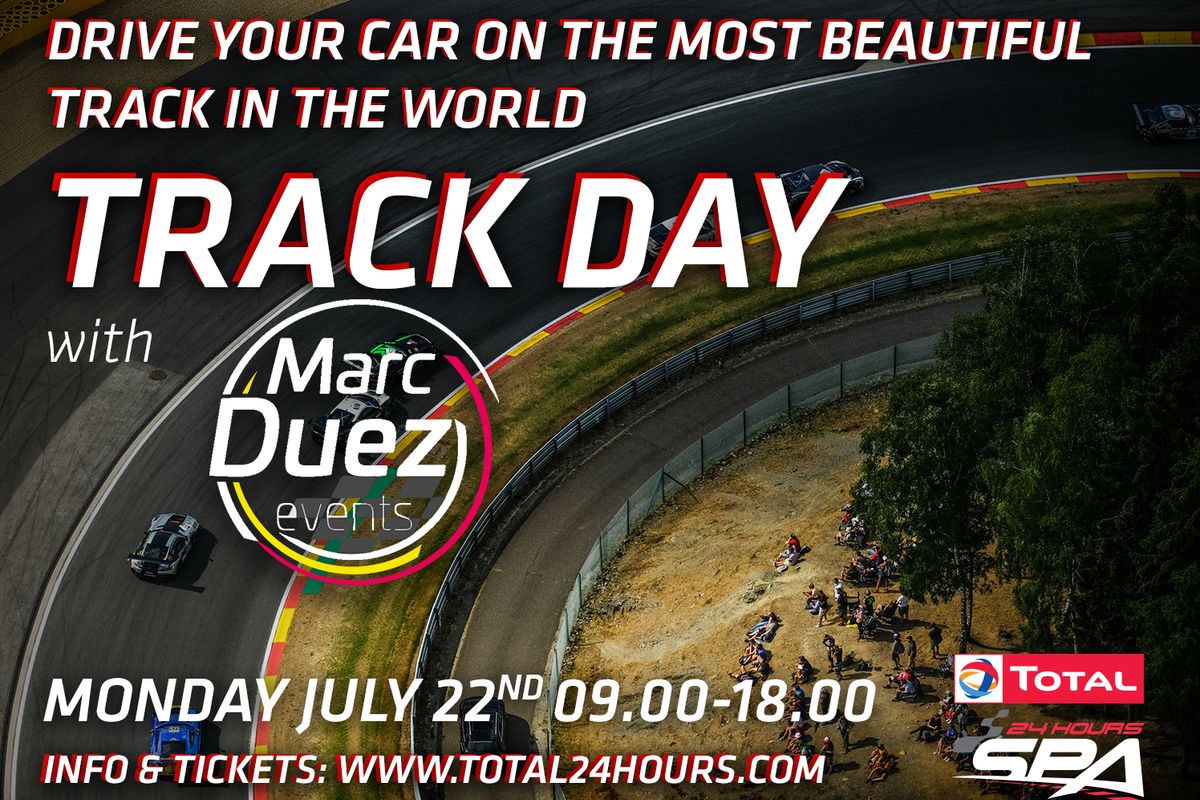 Total 24 Hours of Spa Track Day with Marc Duez: "A chance to share my passion"

On Monday 22 July, just one day before the opening practice session takes place for this year's Total 24 Hours of Spa, members of the public will be able to take their own cars on to the legendary Belgian circuit during a unique track day organised by SRO Motorsports Group and three-time race winner Marc Duez.

For the second year in succession, participants can spend the whole day – eight hours in total – on the iconic layout in the Ardennes. Both regular and race cars (up to a noise limit of 103 dB) will be able to sample the 7km track, while fans can also enjoy taxi laps with professional drivers.

Local hero Duez, whose successful career behind the wheel included three overall wins at the 24 Hours, tells us about the track day and his love for what is now the flagship event of the Blancpain GT Series and Intercontinental GT Challenge.

Marc, would it be fair to say that the Total 24 Hours of Spa has played a big part in your life?

"Absolutely! I am the record holder for participations with 33 starts. On one hand it makes me sad, because it proves that I'm getting older! But on the other hand, I have so many memories of this race, both good and bad. It took me a long time to finally win it, but after getting the first I was able to add another two. That was a very intense time. To understand my passion for this race, you need to know that I attended the 24 Hours as a child, and that I even made three starts on the old circuit – which was more than 14km long."

You experienced both periods of the event, winning in touring cars and then at the launch of the GT era…

"Yes, I was lucky to be in a good situation many times. I was able to win twice in touring cars, with BMW in 1997 and 1998, before winning the very first GT event in 2001 with the Larbre Competition Viper. Having experienced this transition and witnessed the subsequent evolution of the event, I have to tip my cap to SRO Motorsports Group. They had the courage to take things in hand when the touring car race was abandoned by the manufacturers. We can see the difference today: almost every GT manufacturer is represented at Spa and they all want to win it!”

The race is said to be one of the hardest to win. Why is that?

"It has always been difficult to win. There is always something going on – the weather, the mechanics, the heat – and that's why the satisfaction of success at Spa is so great. This is even more true today, because the list of potential winners is incredibly impressive. No other race can offer this. Before, two or three brands could win; now, there are 10! The level of driving is also very high and it has become more of a 24-hour sprint. No one can hope to win by playing it safe and then starting to attack after dark. With the GT3 regulations and the Balance of Performance, all of the cars are pretty much equal. The strategy must be perfect, the car has to run flawlessly, and the drivers must be on it from the beginning to the end. That's what's so special about it. And to make things even more complex, the weather is so unpredictable..."

Your career also included four wins at the Nürburgring 24 Hours and a class victory at the 24 Hours of Le Mans. How would you compare these other great races with the Total 24 Hours of Spa?

"For me, Spa is the toughest. Physically it's very difficult, because there are many long bends in succession that put a big strain on the body. Le Mans is more cerebral, especially with the difference in speed between cars. The Nürburgring is somewhere in between, while also less physically demanding."

On the Monday before this year's Total 24 Hours of Spa, you will once again join with SRO Motorsports Group to organise a "Track Day with Marc Duez". What can you tell us about the second edition?

"This idea came from a common desire. First, SRO Motorsports Group wanted to bring fans closer to the race. What better way to do that than allowing them to drive the very same circuit that will host the 24 Hours just a few days later? Personally, I thought it would be great to organise a day where I could share my love for the 24 Hours and, more generally, Spa-Francorchamps. Although you can appreciate that renting the track comes at a significant cost, we have tried to keep the event as affordable as possible. Ultimately, our goal is to allow the maximum number of people to get involved. Everyone can come with their own car, and competition vehicles are accepted as long as they do not exceed the 103 dB noise limit. The spirit is clear: it must be a good day where the participants share the track, without any aggressive behaviour or notion of competition. I will take care of that personally!"

What will you do during the day?

"I will handle the briefing. Along with a few friends, I will also be driving taxi laps of this beautiful circuit with some really special cars. This is another aspect of the day. It is worth mentioning that, as the teams will be setting up in the paddock, the nerve centre of our event will be located at the karting track. We will also take lunch in the new Karting de Spa-Francorchamps buildings, and this is included in the participation fee. Participants will also be able to watch as the teams set up in the paddock, which is always a sight to behold. What's more, they will also be invited to attend the Total 24 Hours of Spa practice and qualifying sessions as each participant receives 2 free tickets for Thursday 25 and Friday 26 June. I really believe it will be a fantastic day of sport, fun and relaxation.”

Please find below the possible options: