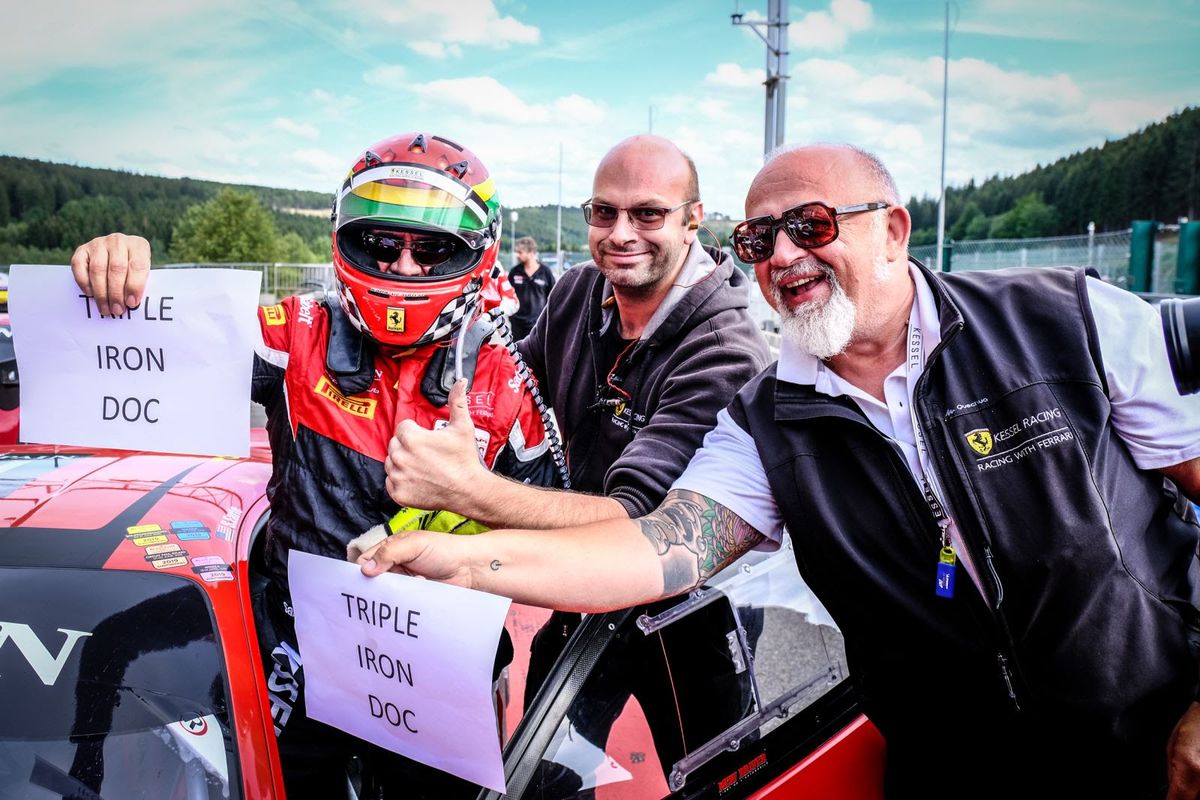 as Remenyako dominates for maiden victory

There was no stopping Remenyako in the final race of the SRO Speedweek, as the #13 Mercedes AMG GT3 driver jumped from third to first in Turn 1 on the opening lap and never looked back, with Earle keeping his Iron Cup rivals at bay to put himself out of reach of AF Corse’s Louis-Philippe Soenen with a round to spare.

Championship leader Jens Reno Moller led them away at the start of race two, but Remenyako superbly dived down the inside of both the #11 Honda NSX GT3 Evo and #23 Ferrari 488 GT3 of Murod Sultanov, as they streamed into La Source for the first time.

Moller and Remenyako made contact on the exit, but the Reno Racing driver continued to pile the pressure on his Russian counterpart as they completed the first few laps. Once Remenyako got his tyres up to temperature though, he managed to gradually extend his advantage out front.

Touring car convert Moller looked to be carrying damage on the front left corner and soon was running more than 10 seconds behind. Meanwhile, HP Racing International’s Coach McKansy was making gains in the #17 Lamborghini Huracan GT3 2019 from fourth on the grid.

The German initially lost out to Titanium Cup rival Lee Mowle in the #44 ERC Sport Mercedes, but despite good defensive driving from the former British GT racer, McKansy swooped around the outside at Les Combes to take back fourth with 25 minutes still to run.

Next on McKansy’s radar was Sultanov, who occupied the final spot on the overall podium. It wasn’t long before the Titanium Cup leader caught the Russian’s Ferrari, who also defended well over the coming laps. It wasn’t enough though, as McKansy muscled through on the inside at La Source to take the place.

Up ahead, Remenyako still held a comfortable advantage over Moller and didn’t put a wheel wrong, taking the chequered flag to claim an emphatic maiden Blancpain GT Sports Club victory on his Spa debut.

Fifth was Mowle, who came on strong at the end of the race, with StileF Squadra Corse driver Pavel Strukov finishing some way back in sixth on board the #777 Ferrari. The Russian was another to make an overtake around the outside at Les Combes, demoting Earle to seventh.

The American was running second in the Iron Cup class at the beginning of the 45-minute race, but Kessel Racing team-mate Howard Blank made a mistake at the final chicane and spun his #56 Ferrari.

This also allowed the #50 Ferrari of Soenen to move into second in class, as he looked to spoil Earle’s celebrations. The Belgian couldn’t do anything to stop him though, finishing one place behind in eighth and ensuring Earle left Spa as the 2019 Iron Cup champion.

Blank recovered well, setting faster laps than the three ahead of him to finish just a second behind in ninth, with HB Racing’s Bernhard Loffler coming home 10th on his maiden Blancpain GT Sports Club weekend in the #666 Lamborghini.

The drivers will next head to Circuit de Barcelona-Catalunya, Spain, for the fifth and final round of the 2019 Blancpain GT Sports Club championship.

Denis Remenyako, GetSpeed Performance #13 Mercedes AMG GT3, Overall winner: “I feel really cool about that win. I’ve got a great team around me and good advice on the pit wall. The only thing I needed to do was whatever my mentor said. It’s my first time in Spa and we were improving throughout the weekend. The start was our secret weapon here. I was told that I needed to get a lot of temperature into my tyres, which gave me the opportunity to brake really late for Turn 1. I knew that Jens [Reno Moller] brakes quite early on the first lap, so I did my best and went down the inside to take first. Afterwards I had some defending to do, as I knew after a few laps the tyres on the Honda would have been quite good. As the race went on I just got faster and faster. It was a big gap, but we almost had a disaster as my fuel light came on with 10 minutes to go. I had to turn the engine down, which is why the gap came down at the end. I’m really happy to win today, god helped us.”

Coach McKansy, HP Racing International #17 Lamborghini Huracan GT3 2019, Titanium Cup winner: “I am really happy to come home with an overall podium and the Titanium Cup win. I had some great battles, first with Lee [Mowle] and then with Murod [Sultanov]. I put the pressure on and forced some mistakes. Once I got through the pace was good and I could put some distance between us. The car feels great, we had to make some improvements after the first few rounds but now I’m more used to the feel and it’s awesome.”

Stephen Earle, Kessel Racing #111 Ferrari 488 GT3, Iron Cup champion: “We knew it was going to be hotter this afternoon, so we put a little bit more downforce in the car. It worked out and the back of the car was really stable, so I could just push, push, push. Howard [Blank] got a good start and we were tight through La Source. He was about three car lengths ahead and I couldn’t get closer until he had an unfortunate spin. Pavel [Strukov] had good pace, so we didn’t fight him to ensure we could seal the championship. Every time you win something like this it’s a little bit different. I lost the title by one point in 2016, won by a point in 2017 and won in 2018 by two points. This year it may have looked easier on paper, but the competition’s still there and David [Perel] has helped me a lot and I’m actually driving much better. It looks easy but it never is.”