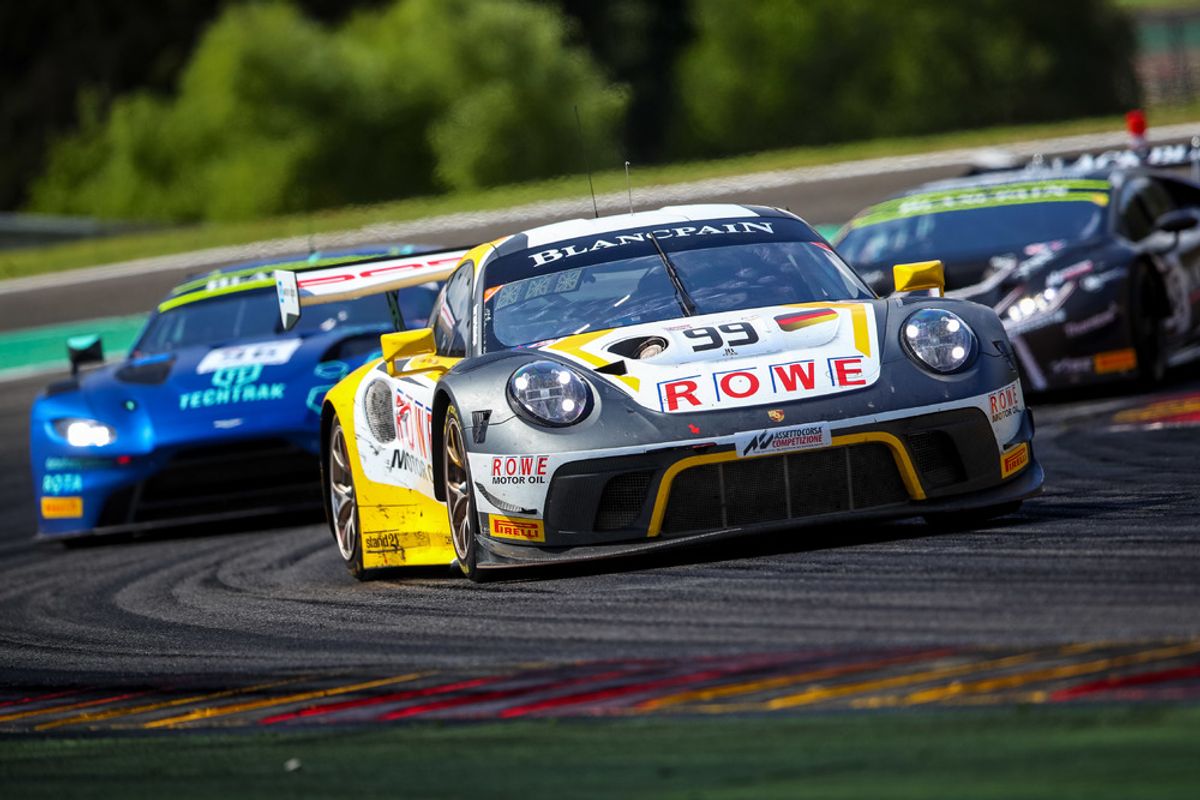 Porsche and its international customer teams take on the Spa 24-hour race with an impressive fleet of 911 GT3 R. A total of nine GT3 racing cars from Weissach will tackle the event at Spa-Francorchamps (Belgium) on 27/28 July, six of them in the GTE-Pro class. The tradition-steeped event in the Ardennes counts towards the Blancpain GT Series Endurance Cup and is also round three of the Intercontinental GT Challenge. The customer squad ROWE Racing fields three Porsche 911 GT3 R with nine drivers from the factory squad of the Stuttgart sports car manufacturer. KÜS Team75 Bernhard, GPX Racing and Dinamic Motorsport also campaign a 500+hp Porsche 911 each in the top category.

“With six pro vehicles and three contesting the Pro-Am class, we’re very well represented in the 72-strong field. There has never been this many GT3 cars at the 24 Hours of Spa. We’ve ticked everything off our to-do list at the official test. The lap times, vehicle handling over longer distances and the feedback from our customer teams have all been very positive,” says Sebastian Golz, Project Manager Porsche 911 GT3 R. “We’re as well prepared as we can be, and we’re excited to tackle the biggest GT3 race of the year. We’re expecting a strong performance with our experienced partner teams at the classic in Belgium.”

The race
The 24 Hours of Spa enjoys a long tradition. The first marathon event took place in 1924, at that time on a 14.863-kilometre course between the towns of Malmedy, Francorchamps and Stavelot. In 1979, the race was held for the first time on today’s permanent racetrack measuring around seven kilometres. Porsche has celebrated six overall victories in the long and illustrious history of the Belgian endurance race for GT vehicles. More than 70 cars take up this year’s race in four different classes. Professional teams contest the Pro class, predominantly with works drivers sharing the cockpits. In the Am-category, ambitious amateurs share driving duties with professionals, and the Silver Cup is reserved exclusively for gentlemen drivers.

The Porsche teams and drivers
Sharing the wheel of the No. 98 car fielded by ROWE Racing are Germany’s Sven Müller with the two French drivers Romain Dumas and Mathieu Jaminet. The three recently secured third place at round two of the Intercontinental GT Challenge at Laguna Seca (USA) and currently rank fourth in the overall classification. Sharing the cockpit of the No. 99 sister car are the Porsche Young Professionals Dennis Olsen (Norway) and Matt Campbell (Australia) as well as works driver Dirk Werner (Germany). This crew line-up won the season-opening round of the Intercontinental GT Challenge at Bathurst (Australia) and now sits second in the drivers’ classification after round three. “At the official test everything ran smoothly,” says Campbell. “Our chances look good to bring home more vital points towards the IGTC overall classification from the season highlight. This will be my first time contesting the 24 Hours of Spa. I love the track and I very much look forward to a close and exciting race.”

At the wheel of the third Porsche 911 GT3 R (No. 998) run by the German customer team sits the Frenchmen Patrick Pilet and Frédéric Makowiecki with their British factory driver teammate Nick Tandy. “I haven’t contested the Spa event since 2016, so I’m really excited to go back. I won the Pro-Am class there once. Now it’s time to take the overall win,” says Pilet. In the identical No. 117 car fielded by the KÜS Team75 Bernhard, team owner Timo Bernhard (Germany) joins forces with Laurens Vanthoor (Belgium) and Earl Bamber (New Zealand). “The 24-hour race at Spa is the highlight of the year for me and for my entire team. The competition at the top will be incredibly tough again this year. We’re tackling the race with the same driver line-up as the last two years and our pit crew is also virtually unchanged. This consistency combined with the strengths of the new Porsche 911 GT3 R should give us good chances in the race,” says Bernhard. “Spa will be a very special race for me, as well,” declares Vanthoor. “It’s my only home race this year and I definitely want to win there with Porsche.”

In the No. 20 car, GPX Racing relies on the two world endurance champions Kévin Estre (France) and Michael Christensen (Denmark) as well as the Austrian Richard Lietz, who won the FIA WEC title in 2015. “It’s always tricky driving amongst more than 70 GT3 cars on a seven-kilometre racetrack. We have to try to get through the heavy traffic unscathed and without making any mistakes,” says Estre. “I get the chance to drive the Porsche in the Gulf livery for the first time. That makes this weekend extra cool.” Klaus Bachler (Austria), Andrea Rizzoli (Italy) and Zaid Ashkanani (Kuwait) man the No. 54 car campaigned by Dinamic Motorsport. The trio won the season-opening round of the GT Series Endurance Cup in Monza (Italy).

The Modena Motorsports team fields a Porsche 911 GT3 R in the Pro-Am Cup. The Canadian John Shen shares the wheel of the No. 16 car with Mathias Beche (Switzerland), Benny Simonsen (Denmark) and Philippe Descombes (France). In the same category, the German brothers Alfred and Robert Renauer join forces with their compatriot Ralf Bohn and the Swiss driver Daniel Allemann in the No. 91 Porsche 911 GT3 R run by Herberth Motorsport. OpenRoad Racing lines up on the grid with an identical GT3 racer (No. 121) shared by Francis Han Joe Tija (Netherlands), Michael William Soeryadjaya (India), Remo Arnaldo Ruscitti (Italy) and Antares Au (Great Britain).

The Porsche 911 GT3 R
The Porsche 911 GT3 R was newly developed for the 2019 season. Improvements in the areas of aerodynamics, kinematics, efficiency and driveability were systematically implemented from the insights garnered from the many race outings of its predecessor. The six-cylinder engine in the rear of the GT3 customer racer produces over 368 kW (500 hp). The successful predecessor has notched up victories in numerous international racing series, for example in the IMSA SportsCar Championship, the World Challenge, the ADAC GT Masters, at the Nürburgring 24-hour race and the Bathurst 12 Hour.

The schedule
The 24-hour race gets underway on Saturday, 27 July, at 4:30pm. The event can be viewed by live stream on the internet website of the Blancpain GT Series (www.blancpain-gt-series.com) as well as on the homepage of the Intercontinental GT Challenge (www.intercontinentalgtchallenge.com).