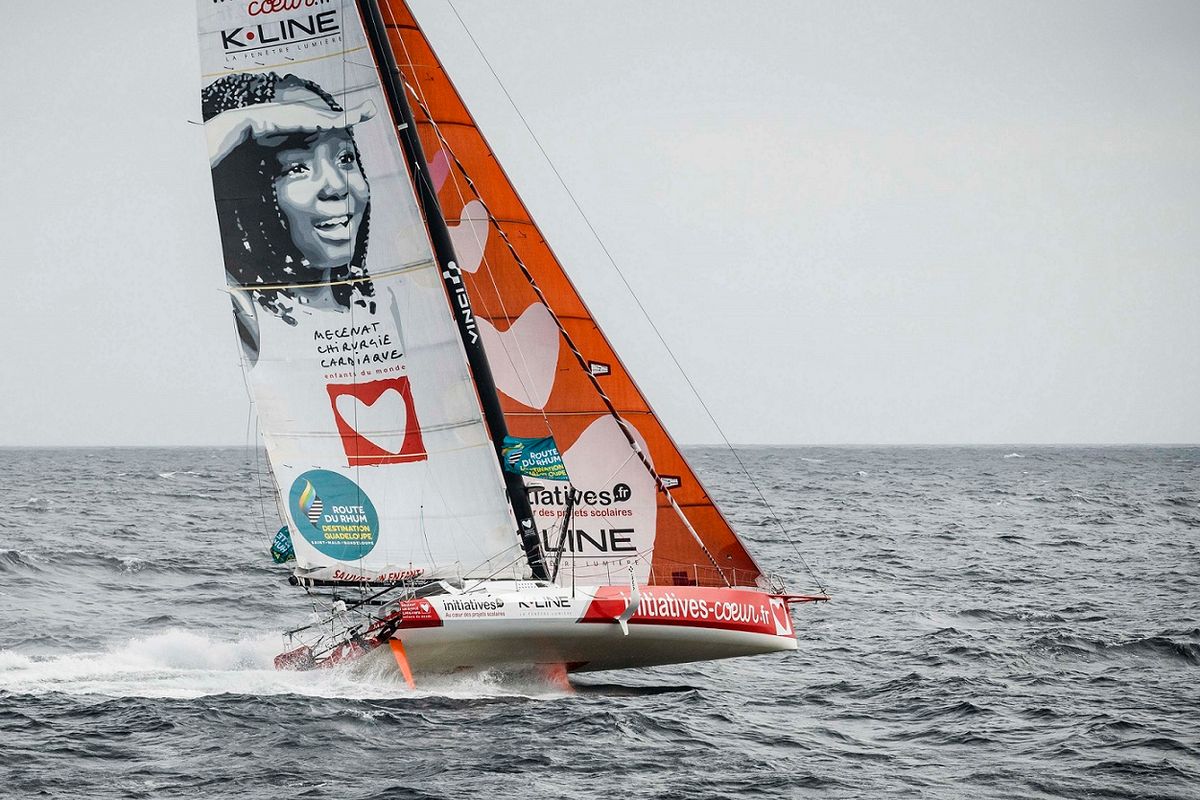 Among the 300-350 boats in this August's record-sized Rolex Fastnet Race fleet, many of the 3,000 crew members are competing to fulfil a personal challenge or to tick the world's largest offshore race off their 'bucket list', but several crews are also using the Royal Ocean Racing Club's premier event to convey a special message, or support a chosen charity.

In the last Rolex Fastnet Race, the inner city school children from the Greig City Academy in the London borough of Haringey won deserved praise for their campaign on board the old Admiral's Cupper Scaramouche. Such was the respect for this, that among their accolades the team won the RYA Award for Endeavour while helmsman Montel Fagan-Jordan was voted YJA Young Sailor of the Year.

This year the average age of the next generation of Greig City Academy students racing Scaramouche, is lower, the youngest being 13-year-old Kai Hockley.
"The new crew is a step ahead of the 2017 crew - they have taken a much bigger role on our yachts," says Greig City Academy's Jon Holt, who set up and runs their pioneering sailing program. "The key players are Azat Utulas and Seun Williams, both from disadvantaged backgrounds, but key leaders of our students." Among those joining them will be 14-year-old Christopher-Joel Fredrick and Jaydon Owusu who have had their school lives transformed for the better by sailing, says Holt.

A similar message of diversity is being pushed by the French Libertalia - Team Jolokia who are campaigning the Laurie Davidson-designed former djuice Dragons VO60 in what will be their third Rolex Fastnet Race. The aim of the campaign is to represent on board the full range of differences prevalent throughout society. 12 crew are chosen from a squad of 20, who, "in addition to their potential or their skills, can enrich the team experience: Whether beginner or certified skipper, disabled person, female senior citizen or foreign national, everyone has the chance to embark on this great human adventure," says Marion Pennaneac'h, the team's Communication and Project Manager.

Several boats are supporting charities. The most high profile is Sam Davies' Initiatives Coeur which uses IMOCA 60 races as the vehicle to raise awareness and money for Mécénat Chirurgie Cardiaque, a humanitarian organisation that helps children suffering from heart defects. Their '1 click, 1 heart' campaign involves the companies Initiatives, K.Line and Vinci Energies donating 1€ whenever the Initiatives Coeur Facebook page attracts an extra fan.

New to the race this year is the charity Ausome, that is providing nine autistic people the opportunity to compete on board Ausome-Lyra of London, a Swan 431 on loan from Miles Delap. The nine will include both experienced yacht sailors and relative novices.

22-year-old founder and a trustee of Ausome, Lottie Harland, who is herself autistic, will be skipper. Harland explains: "After a difficult childhood of being bullied through school for being 'different', it was sailing that built my confidence and self-esteem and helped me to develop the life and social skills to become an independent and successful young adult. I am incredibly grateful to all the organisations and individuals that recognise the huge difficulties autistic people face in making their way in the world and who are helping us so generously to give this crew a chance to show what they can achieve. I know each of our team will take something different away from the challenge and we will do all we can to support them in reaching their own personal goals." Donations can be made to the Ausome Fastnet campaign through: http://uk.virginmoneygiving.com/LottieHarland

Similarly Northumberland-based retired haematologist Jonathan Wallis and his partner Pippa, a retired GP are returning for their second crack at the race. This time though they are racing in aid of the patient forum for Myeloproliferative Neoplasm, a form of blood cancer. Aboard Sheevra, their 1969 vintage Swan 36, they won their class in last year's Yachting Monthly Triangle Race as well as class in the JOG offshore series.

Crewed sailing involves conjuring up a group of people from somewhere, by their like-minded friends or paid hired guns. Many families take part. One exceptional example are the Goubau family from Belgium, who are, to put it mildly, a familiar feature as this will be their 10th consecutive Rolex Fastnet Race aboard their dark blue First 47.7 Moana. Father Francois will be racing with his wife and three sons, including son Mathieu who will be steering - as he has been since he was 16. Still only 38, this will be his 11th Rolex Fastnet Race.

The race has many sailing school and charter boat entries where individuals can buy a berth on board a boat to do the race. In practice this requires substantially more commitment for individuals as both boats and crews must complete qualification races beforehand.

Another way of skinning this particular cat, has been conjured up by Polish pro-sailor and industry figure Przemyslaw Tarnacki, organiser of the Sopot Match Race in Poland, who has created the Ocean Challenge Yacht Club. This gathers high profile Polish entrepreneurs together and has competed at many high-profile offshore events using their Volvo 65 Ambersail2 .

For the Rolex Fastnet Race, Tarnacki will be joined by his 74-year-old father Bronislaw, who competed in the first Whitbread Round the World Race in 1973-74 aboard the Polish entry Copernicus and returns this year as a mark of respect following the infamous 1979 Rolex Fastnet Race in which he observed as a participant of the Admiral's Cup aboard Hadar.