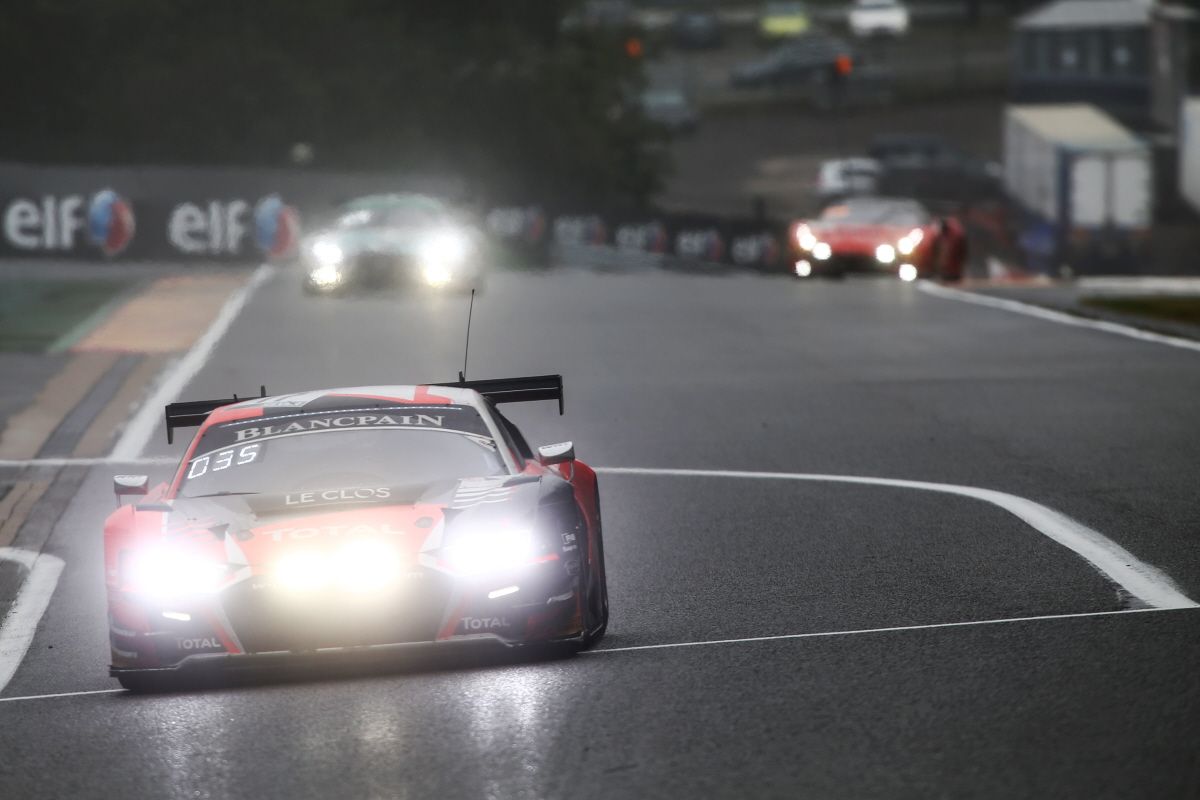 First year Blancpain Endurance Cup racer Alex MacDowall produced a competitive and determined showing in treacherous conditions over the weekend during the toughest race of the 2019 season, the blue riband Total 24 Hours of Spa, to post a hard-earned top six finish in the Silver Cup class.

Building on the season-best seventh place achieved during the previous round at Paul Ricard in France, the Carlisle driver and team-mates Shae Davies and Paul Petit chalked-up an improved class result even though having to start the race at the back of the huge 72-car entry.

Following an unfortunate excursion in qualifying for the newly liveried No.17 Audi R8 LMS EVO GT3 on Friday, 26th July, the Belgian Audi Club Team WRT trio faced an even greater task than expected but they combined to deliver a strong performance to also finish 34th overall – gaining almost 40 positions in total in the race.

Overcoming torrential rain, a race stoppage on the grounds of safety at 06.00 on Sunday, 28th July, and then a dramatic and action-packed final few hours of competition, MacDowall also showcased pace good enough for the Silver podium on his debut in the twice-round-the-clock classic.

“The conditions were terrible, so I was quite happy just to finish the race”, he reflected, “It wasn’t a nice experience to drive in the rain we had at night like that, the visibility was poor. The best way I can describe it is, it’s like when you’re driving on the road in the fog and the headlights just make the vision worse sometimes – you couldn’t see a thing.

“It was tough, the hardest race I’ve ever done, it made Le Mans seem easy by comparison! Doing double stints in such bad weather at Spa was a massive challenge. Just to get through it all in one piece was a result.”

During free practice on Thursday, 25th July, the WRT trio posted the fifth fastest time in Silver and went on to conclude pre-qualifying 11th quickest. Unfortunately, though, everything went wrong in the first session of final qualifying when a rare mistake for MacDowall at Les Combes was punished excessively, contact with the barriers keeping the car out of the remainder of the day’s running.

The team’s mechanics had the car repaired ready for the warm-up session on Friday in which final preparations were made for the big race itself which was scheduled to get underway at 16.30 local time on Saturday afternoon.

As a result of the qualifying dramas, the No.17 Audi prepared to start from the back of the immense grid but rain before the beginning of the race resulted in officials choosing to begin the action behind the Safety Car.

Davies took the first stint and made good progress in tricky conditions, although the track started to dry out ahead of hour two. Running in 24th position overall, seventh in class, at the end of the first hour – albeit with pit-stops already shaking up the race order somewhat – the Audi continued to circulate strongly through the various driver cycles.

MacDowall and Petit took their turns behind the wheel, with the former in particular driving well, and at the first of three points-scoring junctures in the race, the end of hour six, the No.17 crew held seventh position in Silver. Just half an hour later, the complexion of the Silver battle then changed when the class leading Attempto Audi stopped on track which elevated the WRT into sixth position.

Increasingly heavy rain during the early hours of Sunday morning, which turned the entirety of the track into something more suited for Powerboat racing, made for an incredible challenge for the drivers with the risk of crashing out unbelievably high.

More points were allocated at the halfway point, at 04.30, with the team still sixth in Silver before the race was halted due to the horrendous rainfall. As daybreak approached, and no improvement in the weather, officials ultimately chose to red flag the action just before 06.00.

Aiming to re-start the race within a couple of hours or so, the weather didn’t make that possible and the race only resumed at 11.30. Still holding sixth in Silver, 41st overall, MacDowall and Davies shared the final few hours, during which the Australian was fortunate to emerge unscathed from a tangle with one of the BMWs.

Looking back on the race, MacDowall added: “We had the pace to be on the Silver podium, so it’s disappointing we had to start from the back after the rare mistake in qualifying. Sixth in Silver isn’t bad though, especially with all of the traffic and the conditions we had to deal with as we fought our way through. The Audi is a tricky car to get to grips with, but I’m happy with my performance.”

Following the drama of the Total 24 Hours of Spa, there is now a lengthy nine week break in the Blancpain Endurance Cup calendar ahead of the final round of the championship on 28th/29th September at the Circuit de Catalunya in Barcelona, Spain.