British GT Brands Hatch-bound for penultimate round of the season 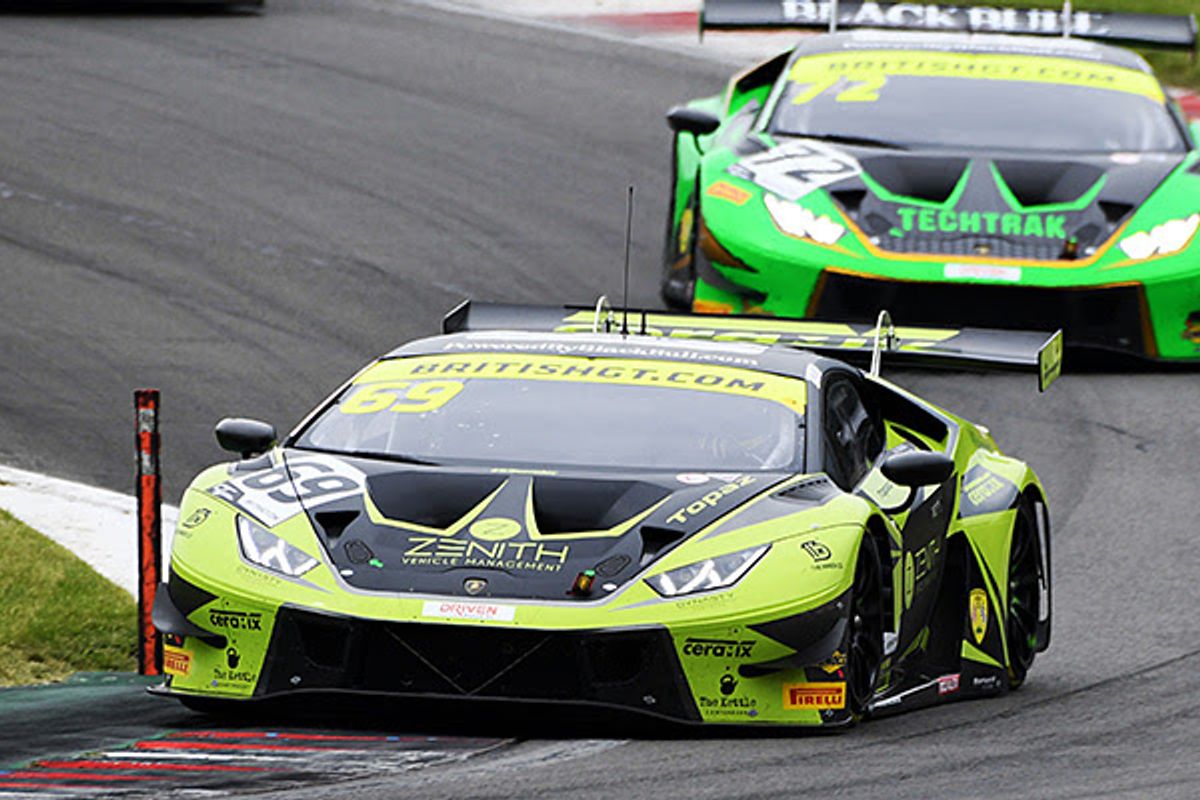 Titles could be decided in both classes

Brands Hatch hosts the penultimate round of 2019’s British GT campaign this weekend when both Drivers’ titles could be decided for the first time this year.

Following three races featuring 40+ supercars, organisers have opted to reserve the remaining two 120-minute rounds for this year’s full-season entries. 14 GT3s and 23 GT4s are therefore scheduled to take the start at 13:00 on Sunday.

Okay, so it’s a long shot. But there’s a chance Sam De Haan and Jonny Cocker could become British GT champions this weekend.

First, the easy bit: the #69 Lamborghini must win. It came very close to doing just that at Brands 12 months ago when Jonny Adam denied Cocker in the final 10 minutes, and with no Success Penalty to worry about the crew should be in contention once again. Assuming they win, the biggest obstacle then concerns their closest championship rivals, Adam Balon and Phil Keen, who would have to finish outside of GT3’s top-10.

That’s not as fanciful as it might sound given the #72 Huracan has scored just 24 points since squirrelling 80 of the 100 available across Oulton and Snetterton, and also retired early two weeks ago at Spa.

That result was in stark contrast to Ollie Wilkinson and Bradley Ellis who, pitstop aside, led from pole to chequered flag in Belgium. Victory moved the Silver Cup duo to within 16 points of De Haan and Cocker, albeit with the caveat of serving the maximum 20s Pitstop Success Penalty this weekend. Should the Lamborghini win, Optimum’s Aston Martin would have to finish no lower than fourth in order to challenge at the final round.

Graham Davidson and Jonny Adam travelled to Spa with a spring in their step after dominating Donington but left with only a handful of points thanks to a brake issue. TF Sport’s Pro knows how to win at Brands – he effectively sealed the 2018 title by doing so last year – but will also be aware that third or lower would knock the #47 Aston Martin out of championship contention in the event De Haan and Cocker win.

It’s a similar scenario for RAM Racing’s Ian Loggie and Callum Macleod who must finish first to have any hope of featuring in the #DoningtonDecider title scrap. Their job is made doubly difficult by the 15s Success Penalty incurred for finishing second at Spa where Macleod memorably passed Glynn Geddie and Rob Bell during the same incredible move through Eau Rouge and Raidillon.

Two Silver Cup entries featured on the overall podium at Spa, and the second of them – Geddie and Ryan Ratcliffe’s Team Parker Bentley – will also be at Brands despite suffering a heavy accident at the 24 Hours of Spa last weekend. The Continental must serve an additional 10s Pitstop Success Penalty for finishing third there in British GT’s race one week earlier.

With several big names either embroiled in the title battle or serving Success Penalties, Brands Hatch might well be the round that Shaun Balfe and Rob Bell’s McLaren finally wins a British GT race. Only Loggie/Macleod have scored more points in the last four outings, while Balfe’s 720S has been a genuine victory contender in the last three.

Its crew is just 0.5 points behind Mark Farmer and Nicki Thiim who have edged their way into the top-six over the second half of this season. The Danish element of TF Sport’s #2 Aston Martin has set fastest lap in each of the last three races, and was also part of the 24 Hours of Spa line-up that won the Pro/Am class last weekend.

However, G-Cat’s Porsche will not appear at Brands Hatch after business commitments forced Shamus Jennings to skip the penultimate round.

Meanwhile, Barwell can clinch the Teams’ title if TF Sport’s Aston Martins fail to outscore the Lamborghinis by four or more points. The gap between them currently stands at 68 points, 3.5 more than available for victory and second place.

It’s a similar story in GT4 where Multimatic Motorsports’ Seb Priaulx and Scott Maxwell must win to have a chance of wrapping up the Drivers’ crown with a race to spare, something that hasn’t been achieved since 2015.

The duo have mastered maximising results from races where Success Penalties slowed their progress. Take Spa, for example, where the Mustang finished sixth despite serving the 20s handicap incurred for winning at Donington as well as an additional Silver Cup time. But while the latter remains in place this weekend, Priaulx and Maxwell will be fighting for their third victory of the season Success Penalty-free.

The opposite is true for Tom Canning and Ash Hand who bounced back into title contention by winning at Spa. TF Sport’s #97 Aston Martin has racked up 93 of its 95 points in the last four races but is about to be hamstrung by the same Success Penalty that restricted Priaulx/Maxwell last time out. Should the Mustang win, Canning/Hand will have to finish no lower than seventh in order to prolong their title challenge.

2.5 points ahead of them are Jordan Collard and Lewis Proctor whose second place at Spa helped them close to within five points of the championship leaders. That result was particularly impressive given their previous 10s Success Penalty, which increases by five this weekend. Overcoming that in the event of a Priaulx/Maxwell victory is key to preventing the title being decided early. Indeed, Tolman’s #5 McLaren would need to finish eighth or higher to remain in contention.

A non-score has dropped HHC Motorsport’s Callum Pointon and Dean Macdonald 20.5s points adrift of the leaders, while Kelvin Fletcher and Martin Plowman remain the only pairing to have scored points in all seven races so far. Both need big results at Brands if they’re to play more than a supporting role at Donington in September. Victory for the #15 Mustang would automatically rule out Beechdean AMR’s Aston Martin, while Pointon and Macdonald – who set fastest lap at Spa – would have to finish third at worst.

Tolman’s other McLaren came within a lap and one corner of winning at Spa where Josh Smith and James Dorlin led much of the race. Another 570S, HHC’s #58 example, has also been fast this year without scoring a breakout victory. That stat could change this weekend when 2017 British F4 champion Jamie Caroline joins Ruben Del Sarte.

Two-thirds of the team and drivers that won at Brands 12 months ago, Balfe Motorsport and Graham Johnson, are now just half-a-point behind Fletcher and Plowman in the Pro/Am standings. Johnson and his co-driver Michael O’Brien have a habit of scoring good results from lowly grid slots but are yet to win a GT4 race outright this year. Perhaps that will change at Brands Hatch.

Meanwhile, reigning Pro/Am champions Nick Jones and Scott Malvern are currently fourth in the class standings behind Matthew George. However, they’re also just 30 points adrift of Fletcher and Plowman who would need to win and hope other results go their way in order to secure the Pro/Am crown with a round to spare.

The starting drivers’ minimum stint time has changed for Brands Hatch: GT4 entries are now permitted to stop after 58 minutes while GT3s must run until the 62nd.

Jonathan Wells, Pirelli UK motorsport manager: “The Brands Hatch GP circuit layout isn’t used often throughout the season, meaning teams with experience around there will have an advantage. The P Zero DHD2 and DH tyres have already been in action around the traditional circuit earlier this year for Blancpain GT World Challenge Europe and GT4 European Series. Large lateral forces are placed on the P Zero DHD 2 tyres on multiple occasions during a lap thanks to the various medium-to-high-speed corners. Tyre wear is normally quite low due to the lack of slow-speed corners as there aren’t as many traction and braking zones to create longitudinal loading.”