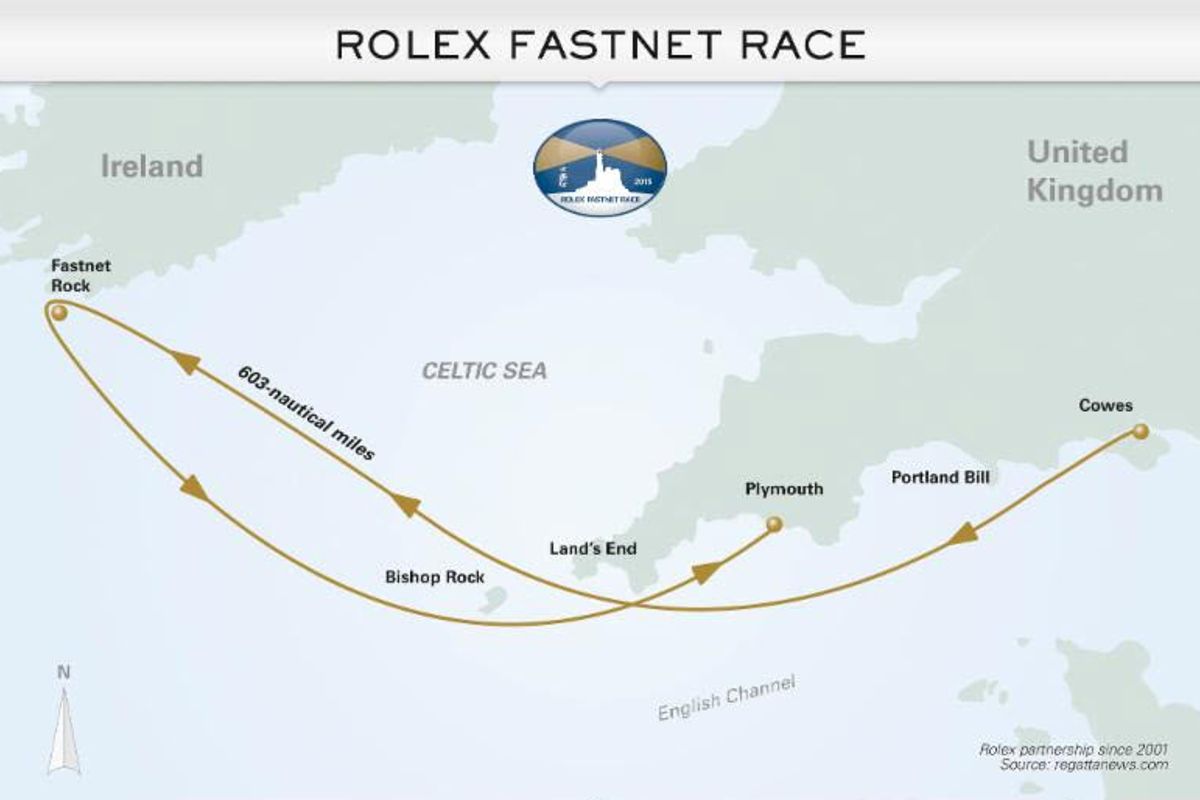 While the toughest competition in the 605 nm Rolex Fastnet Race will be within the individual classes, the ultimate kudos comes from winning the Fastnet Challenge Cup, the outright prize for IRC corrected time for the world’s largest offshore yacht race.

The challenge will be all the harder for this year’s race has an immense fleet of 336 boats (excluding the 60 racing in the non-IRC fleet) with many past winners for the start August 3 of this 48th edition of the Royal Ocean Racing Club’s premier event.

Over the last three editions of this biennial contest, which takes the fleet from Cowes, around Fastnet Rock, to the finish in Plymouth, French crews have lifted the Fastnet Challenge Cup exclusively. Didier Gaudoux and the crew of his JND39 Lann Ael 2 return as the defending champions.

Since 2017, Lann Ael 2 has been converted to twin rudders, which Gaudoux says has improved her performance reaching in a breeze, at the expense of light wind and upwind pace. Her sail plan has been slightly enlarged, increasing her rating.

As to this year’s competition Gaudoux says: “There are too many good boats! That is why we enjoy racing the Fastnet, because it is the best competition. The Rolex Fastnet Race is an iconic race. For all the French boats it is the target of the season. Just to be part of this race is a great achievement.”

Never to be underestimated is Géry Trentesaux, overall winner in 2015 with the JPK 10.80 Courrier Du Leon, when, while racing in IRC Three he finished half way up in IRC One on the water (despite being OCS and then taking 40 minutes to restart thanks to the ebb tide). He is also one of the most experienced Fastnet competitors having first taken part in the 1977 race at the age of 18.

This time Trentesaux returns with Courrier Recommandé, a newer JPK 11.80. Launched last year, she won October’s Rolex Middle Sea Race and since then her owner says that they have “changed many sails and many things. The boat is quite fast upwind and reaching. She is not so fast downwind in medium weather.”

This season the Rolex Fastnet Race is Trentesaux’s principle objective, although he maintains modestly that “we are just coming to participate… The Fastnet is the best race in the world, a mythical race. All the good boats enter it. You have a maximum of 100 boats in the Rolex Sydney Hobart and Middle Sea but 400 in the Fastnet – there is no comparison.”

Should Courrier Recommandé be a ‘good Fastnet boat’? “It could be good with the present forecast,” says Trentesaux. “We will have a south wind in the Celtic Sea to get to the Fastnet so it could be a very fast race.”

Sadly Pascal Loison, the 2013 winner on the JPK 10.10 Night and Day (to date the only ever two handed overall winner) is not competing, however, his highly accomplished Figaro sailor son Alexis is aboard the very latest JPK, the 10.30 Léon, with Mr JPK himself, Jean-Pierre Kelbert. Meanwhile Night and Day has been sold and is now racing as Emmanuel Pinteaux’s Gioia.

Going back further, Niklas Zennström’s former Rán II, which scored back to back overall wins in the Rolex Fastnet Race in 2009 and 2011, returns as Peter Harrison’s Sorcha. Rather nostalgically, her crew include several who sailed on board for those winning races, including former skipper Tim Powell and navigator Steve Hayles.

While great sailing in the Rolex Fastnet Race will go some way to ensuring a class win, to lift the Fastnet Challenge Cup, the weather plays a greater factor. Three days out from the start Mother Nature seems to be smiling on the smaller or mid-fleet boats, with start day set to be slow.

Reports race meteorologist Libby Greenhalgh, “It still looks very light and quite tricky and unstable too, because there are thunderstorms inland which won’t help the sea breeze.” Fortunately the entrants, ranging from 32m Ultim trimarans to the Rogers’ family’s Contessa 32 Ascent, should get flushed out of the Solent on the ebb tide.

Once started, it will be a case of playing the tides to maximum effect and the local sea breeze.

The good news is that for most, the passage across the Celtic Sea, to and back from the Fastnet Rock, looks set to be fast with the wind building to as much as 20-25 knots, either from south or southwest, generated by a static depression west of Ireland.

With the onset of a front, typically the wind veers into the northwest, but Greenhalgh says this won’t happen significantly. Of equal interest is the southerly wind building for the boats behind which she reckons is likely to lead to compression in the fleet. “At Land’s End you might find the big boats are still within eyesight of some of some 40 or 50 footers that have done it right…”

With the present forecast IRC One or Two look favored.