Rolex Fastnet Race: The Hare and the tortoises 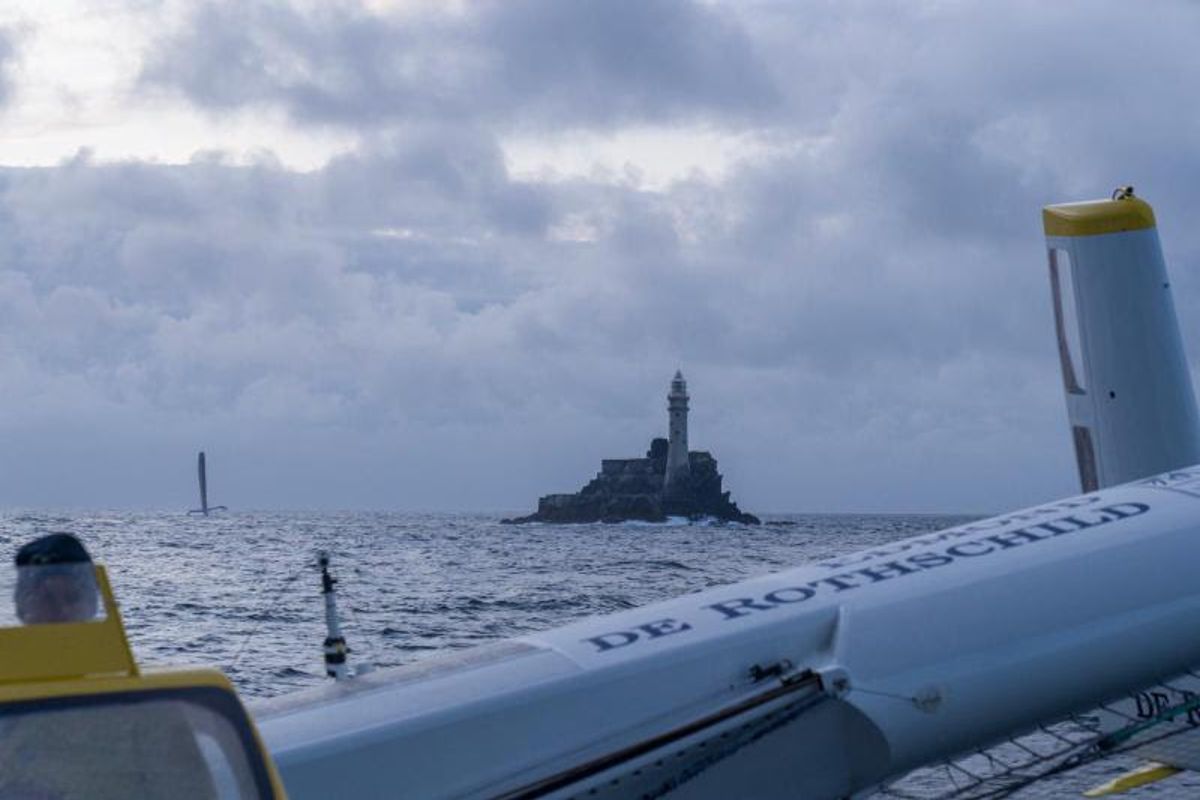 Overnight in this 48th Rolex Fastnet Race, the much forecast park-up caused by the wind transition between the southeasterly and southwesterly gradient breezes created a driftathon and a major compression in the fleet between Start Point and the Lizard. This meant a park-up for the majority of the fleet...but for some more than others.

Across Lyme Bay the majority of the fleet took a southerly course, passing closer to the Casquets traffic separation scheme than to Start Point, the idea being that the all-important transition zone leading to the new southwesterly breeze would be at its narrowest here. As they were headed and tacked, the boats most fully committed to the south - especially the IMOCA 60s PRB and Malizia - Yacht Club de Monaco - had sailed as far south as the Channel Islands before the breeze shifted enough for them to tack.

But the boats which would prove stars of the show were those which had remained north. Passing Start Point at around 2100, British IMOCA 60 class newbie Pip Hare, sailing doublehanded with the fastest man on the water, Australian Paul Larsen, were furthest north, just seven miles offshore. Subsequently they nosed slightly north of course, in towards Plymouth, with the result that by the end of the evening Hare and Larsen were leading not just the IMOCA 60 class, but the entire monohull fleet, including the maxis SHK Scallywag and Rambler 88 (at the time desperately trying to claw their way north), and the 'hot 70s' such as Jethou, Wizard and Sorcha. Up against the largest exotic carbon fibre hardware, they were sailing an ancient IMOCA 60 that began life as Bernard Stamm's Velux 5 Oceans solo round the world race winner in 2002.

"We just ended up sailing our own course, while the foiling boats were doing what they needed to do," said a jubilant Pip Hare this morning. "Going across Lyme Bay, we wanted to just get west as fast as possible so we stuck up our biggest masthead kite - more of a VMG kite - and we ended up sailing low and fast, and then just kept moving!

"Getting that separation from the fleet meant we didn't fall into the same hole as them. Then we worked pretty hard during the night, sail changing, moving stuff around etc. The breeze got very light, down to around 3 knots, so we were really working the boat hard. The tactic was just - keep sailing west: Speed, speed, speed!

Hare continued: "Seeing us first monohull under line honours was like - WOW! Completely unexpected! And then to still be in this position this morning... We can see Banque Populaire behind us and of course all the fleet is coming in to meet us and I don't imagine they'll put up with us forever ahead for much longer..."

Paul Larsen added: "It's been pretty good! I wonder what all those boats have been up to over there, parked up! Those foilers go fast but will escape again, so we'll get all our photos up today. I hope you're enjoying it because we certainly are!"

Inevitably Hare and Larsen's fame was short-lived. In swift succession David and Peter Askew's VO70 Wizard and Seng Huang Lee's SHK Scallywag (overall and line honours winners of the recent Transatlantic Race 2019) were first to pass them, followed by George David's Rambler 88 and Sir Peter Ogden's 77ft Jethou. Nonetheless there was huge credo that this morning Hare and Larsen were able to pass the Lizard in the lead of the IMOCA 60 fleet, including all the hot new hardware and crews with multiple Vendée Globes behind them. At the time of writing Hare and Larsen were trying to fend of the approaching Arkea Paprec, the brand new, fresh out of the box IMOCA 60 sailed by Sebastien Simon and Vendée Globe winner Vincent Riou and Banque Populaire, crewed by Clarisse Cremer and reigning Vendée Globe champion Armel le Cleac'h.

New record in the Ultim match race to the Rock
Incredibly, despite the significant early evening slow-down in the transition zone between Start Point and the Lizard, the lead Ultims trimarans passed the Scilly Isles just after midnight and then covered the 190 miles between the southwest corner of the Traffic Separation Scheme between the Scilly Isles and Land's End in just six and a half hours, at an average of more than 29 knots.

In the match race for the Ultim lead between Maxi Edmond De Rothschild and MACIF, Charles Caudrelier and Franck Cammas' team had her nose ahead and rounded the Fastnet Rock at 06:33:38 BST, just two minutes ahead of Francois Gabart's MACIF at 06:35:31 BST. Maxi Edmond De Rothschild's elapsed time from the start of just 18 hours 3 minutes and 38 seconds (and 18 hours 5 minutes and 31 seconds for MACIF) is a new race record time to the Fastnet Rock, the previous best being that of Loick Peyron and the crew of Banque Populaire V who set a time of 22 hours 21 minutes and 25 seconds in the speedy 2011 race.

Having been slower through the transition, Thomas Coville's Sodebo Ultim 3 rounded the Fastnet Rock more than two hours astern at 08:37:35 BST with the Yves le Blevec-skipper Actual Leader at 09:20:32 BST.

Since then Francois Gabart and America's Cup winning skipper Jimmy Spithill, on board MACIF, have overhauled Maxi Edmond De Rothschild, which has suffered some as yet unknown damage to her appendages following her contact with the Shingles Bank yesterday.

Park-up
Since 0500 this morning, the tide has turned foul and those out in the middle of the Channel, still attempting to pass the Lizard, are making some wide tacking angles. As predicted before the start this is going to be the 'make or break moment' of the race.

Following the race via the tracker: https://www.rolexfastnetrace.com/2019-fleet-tracking-race-player

IRC Two are this morning mid-way between Start Point and the Lizard. In this class it is the leaders on the water who are also doing best under IRC - and they are two of the wiliest French teams: Nicolas Loday's Grand Soleil 43 Codiam and 2015 overall winner Gery Trentesaux with his new JPK 11.80 Courrier Recommandé. However, now upwind and uptide, they are both only making 3-5 knots through the water.

Only a short way behind, France is again doing well in IRC Three where Arnaud Delamare and Eric Mordret's JPK 10.80 Dream Pearls is leading. They are south of doublehanded Olympic hopefuls Hannah Diamond and Henry Bomby on their Sun Fast 3300 Fastrak XII. Meanwhile leading the class to the north are formidable British Corinthian doublehanders Rob Craigie and Deb Fish on the Sun Fast 3600 Bellino. Again they are making 4-5 knots with wide tacking angles.

France also holds the top three spots among the smallest/slowest boats in IRC Four. At present the leader is perennial class winner Noel Racine's JPK 10.10 Foggy Dew, sharing the lead on the water with Emmanuel and Etienne Pinteaux's sistership Gioia and, really impressively, Francois Charles's Dehler 33 Cruising Sun Hill 3 is also up there. The IRC Four leaders mid-morning were due south of Plymouth, albeit a long way offshore, with Francois Moriceau's JPK 10.10 Mary on a flier, furthest south.