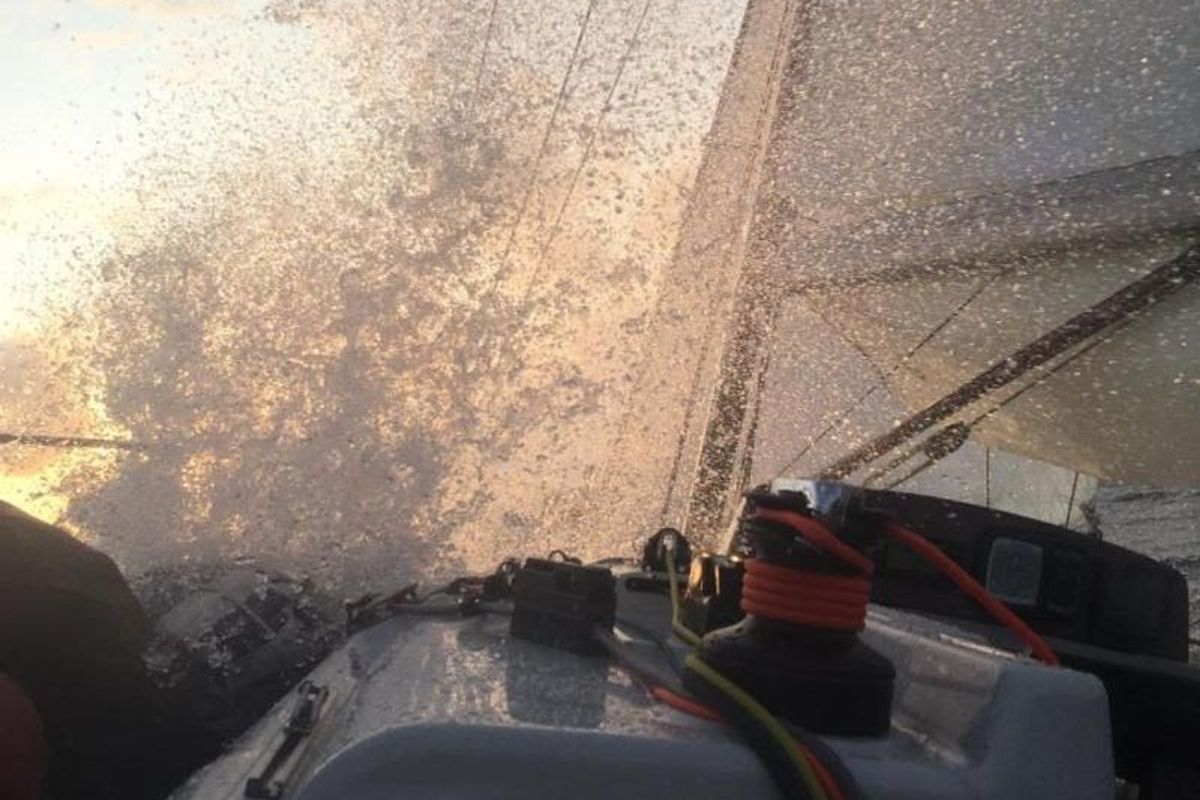 One hundred and seventy one teams in the Rolex Fastnet Race were taking part in IRC Three and IRC Four, close to half of the record-breaking fleet. For these smaller/slower boats endurance is key as they spend four days or more days at sea. The passionate, international collective who complete the arduous task can rightly celebrate in Plymouth, while those that rise to the top are worthy of much praise.
Léon surf to victory in IRC Three

This was the third race that Alexis Loison has won class in the Rolex Fastnet Race, this time racing with the boat builder Jean-Pierre Kelbert on the brand new JPK 10.30 Léon. In the light airs at the start of the Rolex Fastnet Race, Leon was not the fastest boat but the doublehanded team kept in touch with their rivals. At the Fastnet Rock Léon eased sheets pulling the trigger, surfing all the way back to the finish at Plymouth, for a massive win in IRC Three and IRC Two Handed.

"An amazing race, a magnificent fleet with a lot of different boats, a race where you always have battles - it is a mythical race," commented Alexis Loison. "The best time was just after the Fastnet, when we put up the little spinnaker. We had over 20 knots of boats speed many times and there was a lot of water on board. Although we were just two, we changed the sails together and talked strategy, we made a very nice team. Jean-Pierre is a great windsurfer so he was very good downwind to the finish, jumping from wave to wave!"

"The first boat I built was for myself, but now I am very proud for all of the JPK team, especially the designer Jaques Valler." commented Jean-Pierre Kelbert. "For me it was interesting to test the new JPK 10.30 in quite strong breeze. The boat was really safe and fast but it was completely wet on board all the time. It was exhilarating to race at night at high speed in complete darkness, to do that in a small boat with Alexis was very exciting."

Eight of the top ten teams in IRC Three were racing Two-handed, a new combination of Henry Bomby and Hannah Diamond racing Sun Fast 3300 Fastrak XII was second in both IRC Three and IRC Two-Handed. Hannah and Henry are at the start of an olympic campaign, hoping to represent Great Britain at the 2024 Summer Olympics, which will have a new event, the Mixed Two Person Keelboat Offshore.

"We have had an awesome race that we started without too many expectations," commented Henry Bomby. "To come second in the Two-Handed class is amazing, and we have learnt a lot. The race turned out to be the perfect length as the olympic event should be three days and nights, we are just starting out on our journey but this has been the perfect start. Plymouth put on an amazing arrival, I grew up in Dartmouth and our friends and family have come down to meet us for a beer and a burger."

We definitely put the boat through her paces over the last couple of days, especially as she is brand new and we have only sailed her in the Channel Race before," commented Hannah Diamond. "It was busy for us around the Fastnet Rock, it is difficult to take it in when there are just two of you.

Louis-Marie Dussere racing JPK 10.80 Raging-Bee² with Bruno James was third in IRC Two-Handed and fourth in IRC Three, both sailors are amateurs and have a combined age of 108 years! "Try as we might, Léon and Fastrak were too fast downwind, when we arrived at the Fastnet Rock were decided that passing them would be untenable, when they ease the sails, they have the design and the crew has the physical strength to go much faster." smiled Louis-Marie Dussere. "Our Code Zero would not furl so we could not use it for many hours, but the big difference is that these new boats are much lighter. We can sail with them upwind but downwind is not possible, they get on the surf and stay on the wave, just like a windsurfer. We are not professionals so we are first for the amateurs and Bruno James is also the fishing champion - he managed to hook a large shark on our rudder!"

Arnaud Delamare and Eric Mordret's JPK 10.80 Dream Pearls won class in 2017 but this year the team from St Malo, Normandy was third in IRC Three by less than three minutes from Fastrak XII. Dream Pearls was leading in the early part of the race by some distance but sail damage at the Fastnet Rock put pay to their attempt to retain the class title. "We destroyed our A3 spinnaker, and raced all the way to the finish with our genoa, but that is yacht racing," commented Eric Mordret. "Congratulations to Léon, and also to Fastrak, with whom we had a terrific battle with. We hope to be back next time but right now I am thinking about a nice steak after such a tough race. This is a mythical race with sporting legends from the great ocean races - it is so special to be part of that."

With 87 starters, IRC Four is the largest class racing in the 2019 Rolex Fastnet Race. The vast majority of the sailors are passionate amateurs fulfilling their dream of racing in the Rolex Fastnet Race. As of Wednesday morning, after five days of racing, only 10 boats from IRC Four had finished the race, however none of the teams still racing can beat Noel Racine's JPK 10.10 Foggy Dew. Astonishingly, out of Racine's eight Fastnet Races, he has won class four times. It is no surprise that the grandmaster from Le Havre has also won class in the last four consecutive RORC Season's Points Championships.

"It was quite a wet and windy race," said Noel Racine with a smile, as he stepped ashore with the Foggy Dew crew at 0100, after four days and nights at sea. "It was tricky at the beginning, then interesting and more windy and difficult after that. We knew that before the race we would have that early transition zone and we had prepared well for that. The strong elements later in the race were a bit more of a surprise. Rounding the Fastnet Rock we had 25 knots but we like to sail with strong wind so that was not any problem for us. Foggy Dew does not always win but when we have a variety of wind, as we have done in this race, it is exactly what we need. This will be the last race for this boat, but a new JPK 10.30 is on order and we hope to be back in 2021. Now for not only one but two beers!"

JPK 10.10 Gioia, skippered by Emmanuel and Etienne Pinteaux, was second in class, just over an hour behind Foggy Dew after time correction. Emmanuel and his brother Etienne were sailing with Tristan Pochot and Bernard Cordeau.

"Gioia means joy in Italian and this race was a dream come to for us," commented Emmanuel. "We all group up together, learning to sail in St Vaas, Normandy, and as children we dreamed of doing the Fastnet Race together. Between us we have competed 11 times, but never together as a crew. To do the thing you love with the people you love is an amazing experience. After three days we were exhausted, but better weather on the fourth day gave us some strength. The funniest moment was surfing back from the Fastnet at high speed. We hit a wave which rolled down the deck depositing four fish on board - we did not have any lemon, so we threw them back! This is only our fourth race with the boat, so it is a steep learning curve but, with the help of Pascal Loison, who raced her as Night and Day, we are learning fast!"

Conditions aboard Sun Hill 3 were wet and wild

Dehler 33 Sun Hill 3 was third, an extraordinary achievement for a boat that was built in 1996. Sun Hill 3 was 60th in class in 2017: "In 2017 we tore our mainsail at the Fastnet Rock which was frustrating," explained Francois Charles. "We are a team from Morlaix, near Roscoff Brittany, where we are a brokerage although we also prepare boats such as Class40s. Since I was a child I have dreamed of racing the Fastnet, and this year the ride back from the Rock to the Iles of Scilly was amazing! We hit a new boat speed record of 19.3 knots and there was a lot of whooping on board at that moment!"

"Tired but emotional," summed up Nigel after this 6th Fastnet Race. "When you are out there - cold, wet and tired - you wonder what on earth you are doing but I close my eyes and think of a cold glass of wine by a roaring log fire. When we look back on the race, and the competition, we are very chuffed with our performance. We did manage to get past Foggy Dew in the light airs at the start, but they pulled away. We focused on trying to stay with them, and also to be more disciplined in getting sleep, food and water, but it was difficult with the rough conditions in the latter part of the race. I have sailed with my son all his life and most of mine, so this was a very proud moment for us."

As of 1030 this morning (Wednesday 7th August) with the rounding of Stuart Giffin's Agamemnon, the last of IRC Four have gone round the Fastnet Rock and are bound for Plymouth.

Image: Conditions aboard Sun Hill 3 were wet and wild