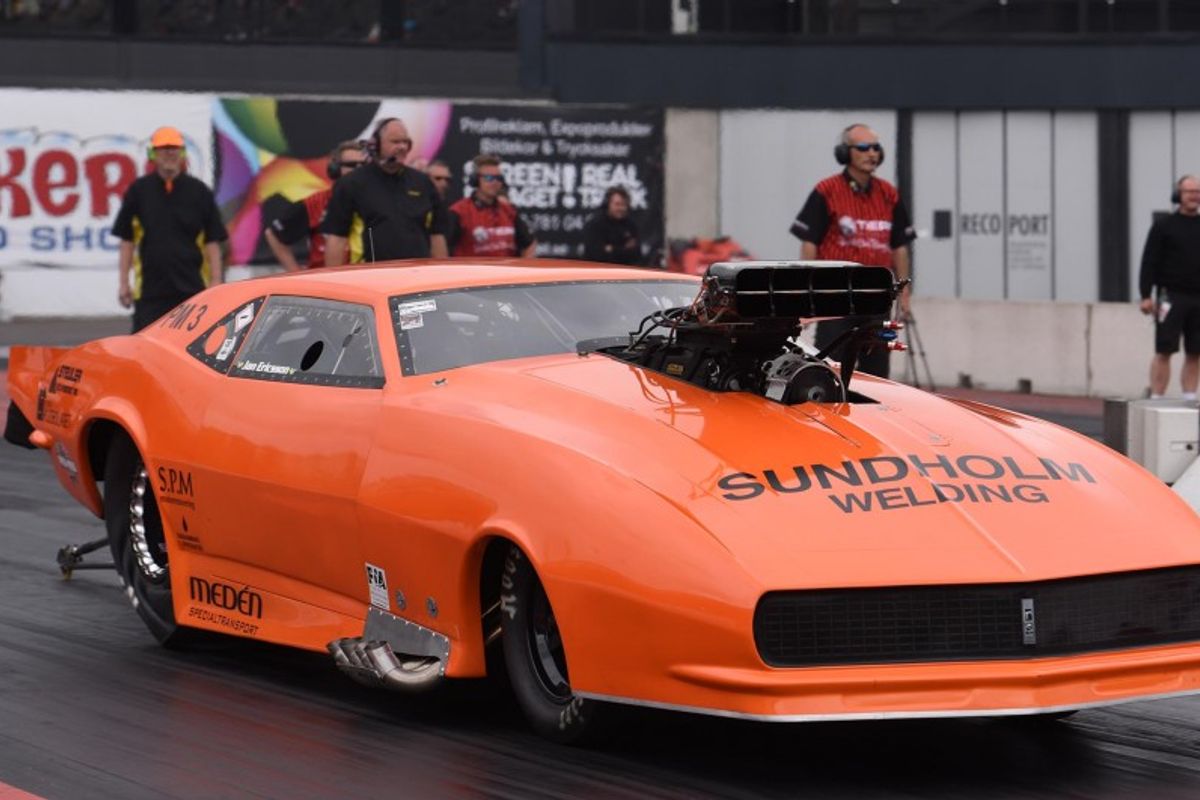 Image: Anita Mäkelä raced to victory over Micke Kågered in the Top Fuel final of the Tierp Internationals

The 2019 FIA European Drag Racing Championship season has reached the halfway point and, following a short break, resumes this week with the NitrOlympX event at the Hockenheimring before moving north to the Tierp Arena in Sweden only a week later

After the opening three rounds, Anita Mäkelä leads in the Top Fuel category. The reigning champion from Finland dominated the first two race meetings of the season and was then fastest in qualifying at her home event in Kauhava, but was surprisingly defeated in the first elimination round.

That gave Maja Udtian the opportunity to reduce the gap to Mäkelä to 46 points. In her first full FIA European Championship season, the 21-year-old Norwegian driver has finished on the podium at each round this season, but is still awaiting her maiden victory.

Udtian’s team-mate Liam Jones lies third in the championship. The racer from the UK was victorious at the Hockenheimring in 2018 and he will be looking at repeating his success this year.

Currently fourth in the standings, and the surprise winner of his home race at Kauhava, Timo Lehtimäki is set to skip German, but will resume his season in Sweden.

Following a win at Kauhava, Sandro Bellio took the lead in the Top Methanol category, demoting Jonny Lagg to second in the standings. The Belgian Funny Car driver was also the winner at Santa Pod, but Lagg took the victory at his home track in Sweden. In his first Top Methanol race, Silvio Strauch was a surprise runner-up at Tierp and the German rookie is back for more.

Dennis and Timo Habermann will return to action for the first time this year. Last year’s numbers one and two in the championship will start their season on home soil. The two brothers may be out of contention in the title race, but will no doubt be aiming for victory in front of the German fans. Jürgen Nagel is another veteran racer back for a one-off appearance.

With four vs two, there will be more dragsters than Funny Cars at Hockenheim. However, a week later this ratio will be different with five Funny Cars and two dragsters. The Habermann brothers and Nagel will be absent in Sweden, but local Daniel Jedborn will bolster the line-up. Johnny Oksa and Ari Pietilä started their season at Kauhava and both Finns will be back for more in Sweden.

Equipped with a new engine in her Funny Car, Linn Engan Fløysvik will also return at Tierp. After major mechanical problems last season, Mikael Larsson used the winter break to regroup but will be back at his home venue, bringing the number of Funny Cars up to five.

Pro Stock will have six competitors at Hockenheim and they are also the top six in the championship standing. With two wins, Jimmy Ålund is leading the championship with a very strong Michael Malmgren in second position. Bengt Ljungdahl didn’t have the best of starts to his season, but the reigning champion was back in Kauhava where he made up some ground with a runner-up finish.

Simon Gustafsson is the currently fourth in the standings after his win in Finland, while Robin Norén, classified one place lower, was the winner at Hockenheim last year and will be eager to win his first race of this season in Germany. The 2018 runner-up, Stefan Ernryd, is classified sixth and will be out for revenge with his now pink-coloured Dodge Dart.

The Pro Stock class has its roots in Sweden and that will once again be visible at Tierp, where the number of entrants compared to the Hockenheim round is expected to double up. The six from Hockenheim will be accompanied by Swedes Thomas Lindström, Magnus Petersson, Christian Sagelv and Jonas Bobergall as well as Sampsa Palos and Richard Sundblom.

This year’s Pro Modified title fight is extremely close with three different winners out of three races and the top six separated by only 55 points. Jan Ericsson claimed a victory at Tierp and is still leading the championship, although the Swede was defeated in the quarter-finals at Kauhava.

Only 16 points short of Ericsson is Andreas Arthursson, who narrowed the gap with a second place in Finland. Michael Gullqvist is third, but the winner of the opening round at Santa Pod lost a lot of ground on his championship rivals in Tierp and Kauhava. Jimmy Ålund is fourth, but without a win or runner-up finish to his name. Yet, being only 44 points down on the leader, everything is still possible for Ålund.