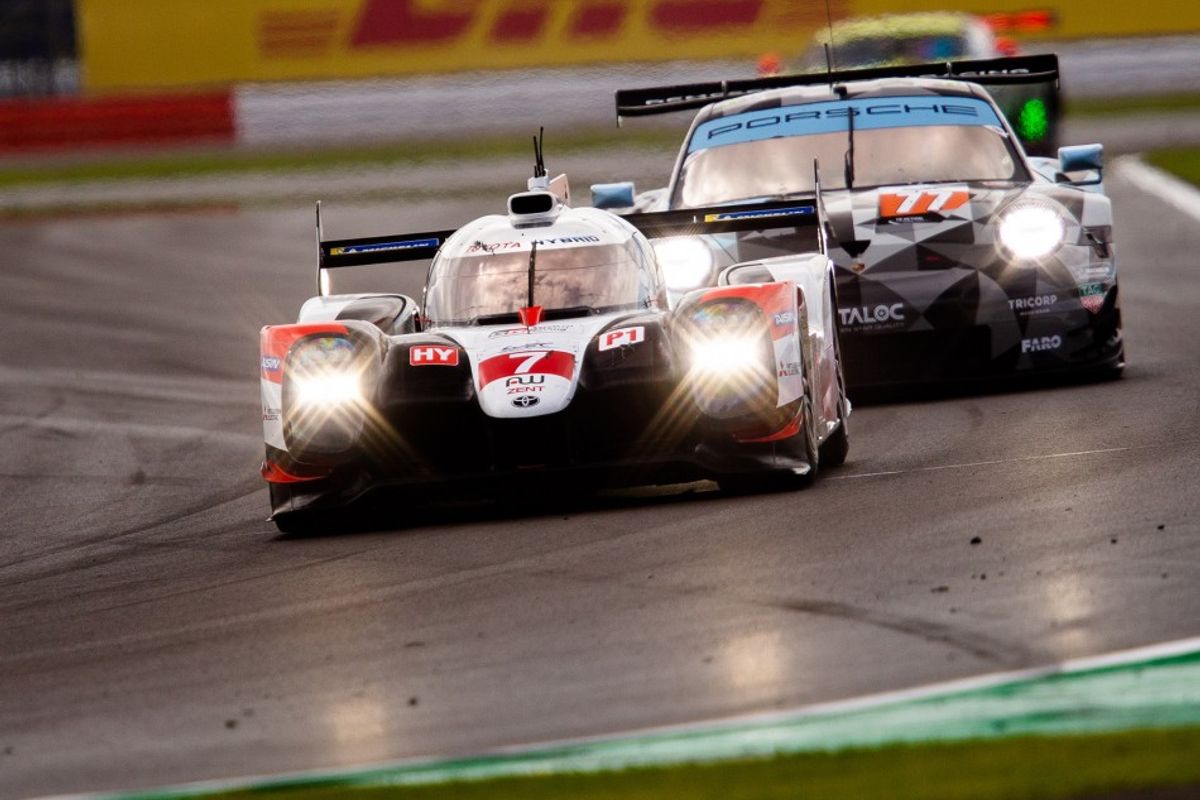 Toyota and Porsche both claimed the top two steps of the podium in Round 1 of the 2019/20 FIA World Endurance Championship at Silverstone.  The 4-hour race in the UK saw safety car periods and rain showers mixing up the racing action and providing drama and excitement for the large British crowd.

The no7 Toyota TS050 Hybrid of Mike Conway, Kamui Kobayashi and Jose Maria Lopez take the top step of the podium by just 1.9 seconds at the end of the 4 Hours of Silverstone, with the no8 Toyota of Brendon Hartley, Sebastien Buemi and Kazuki Nakajima in second spot.  Rebellion Racing finished third and fourth with the no3 R13-Gibson of Pipo Derani, Loic Duval and Nathanael Berthon taking the final podium place.

In the LMGTE Pro category the Porsche GT Team were very pleased with a 1-2 finish on the brand new Porsche 911 RSR-19’s WEC debut.  The no91 911 of Gianmaria Bruni and Richard Lietz was the first across the line, just ahead of the reigning world champions Michael Christensen and Kevin Estre in the no92 Porsche.

The no97 Aston Martin Racing Vantage of Alex Lynn and Max Martin took the final podium place, capitalising on a late race penalty for the no51 AF Corse Ferrari of Alessandro Pier Guidi and James Calado, who finished fourth.

It was a debut win for the no42 Cool Racing Oreca, with Nico Lapierre and Antonin Borga sharing the driving in the 4-hour race following Alexandre Coigny’s accident in yesterday’s ELMS race, the Swiss driver suffering from a cracked pelvis.

Lapierre had to pit five minutes from the flag to change a tyre but the Frenchman brought the car home to finish ahead of the Signatech Alpine Elf A470, with Thomas Laurent overtaking the no29 Racing Team Nederland Oreca of Frits Van Eerd on the last lap of the race.

In LMGTE Am the no83 AF Corse Ferrari of Francois Perrodo, Emmanuel Collard and Nicklas Nielsen took the first win of the season, finishing ahead of the no98 Aston Martin Racing Vantage of Ross Gunn, Darren Turner and Paul Dalla Lana in a competitive eleven car class field.

The no86 Gulf Racing Porsche was set to take second place but Ben Barker was forced to take a stop for fuel with a few minutes left on the clock, dropping the British team down to fourth behind the no70 MR Racing Ferrari.

What the Drivers Said after the 4 Hours of Silverstone

“Great to win here at Silverstone as it is a home race and I have been trying a few times so it feels great to have got it done.  It was a tight race with the sister car as ever and we lost some time in the pits and lost position so it was difficult to recover. Kamui has a tough stint with the weather conditions but did a stellar job and Jose pulled out some really good times out and got a gap, so a great job by the guys who have been lacking a bit of sleep so a big thank you to them.

“It [the RAC Tourist Trophy] is a lovely trophy and one I have always wanted to win as it has had some great previous winners so it’s pretty cool.”

“It was a quite interesting four hours and it is amazing how much can happen. We had all kinds of conditions, slick tyres in the rain and then quite dry conditions so it was quite intense for us but we did ok and it brought us in to the position for victory when we made the driver change.  I think for the new car we learned a lot so for sure we have to analyse the data and to come back stronger because pace wise we are not 100% there but strategy and pit work was fantastic and P1 and P2 for the new car is fantastic for Porsche and I am happy for the people in Weissach.”

“It was very chaotic for us this race because first of all we only had two of us after Alexandre [Coigny’s] crash yesterday so it was hard to leave him on the side after this unfortunate crash yesterday.

"So we had to keep the whole team focused and motivated. We had two punctures and a drive through [penalty] in the end but it was a great strategy from the team but it was hard and we fought back and took the lead again and we could open the gap and win the first race for the team so it is a wonderful end for us because last night we were sad for Alex’s accident.”

“It is a very special day today because my last victory was here at Silverstone with Emmanuel [Collard] back in 2016 so it is a very nice feeling as ‘Manu’ has not driven for almost two years and you know that the GT cars are not that easy to master. It was hard to keep up with the leaders in the first stint but then Manu did a great job in the rain. Then Nicklas [Nielsen], who is our new silver driver, is brutally fast full stop!"

The next round of the 2019/20 FIA World Endurance Championship will be in Japan with the 6 Hours of Fuji on Sunday 6 October.