British GT Championship down to the wire at Donington 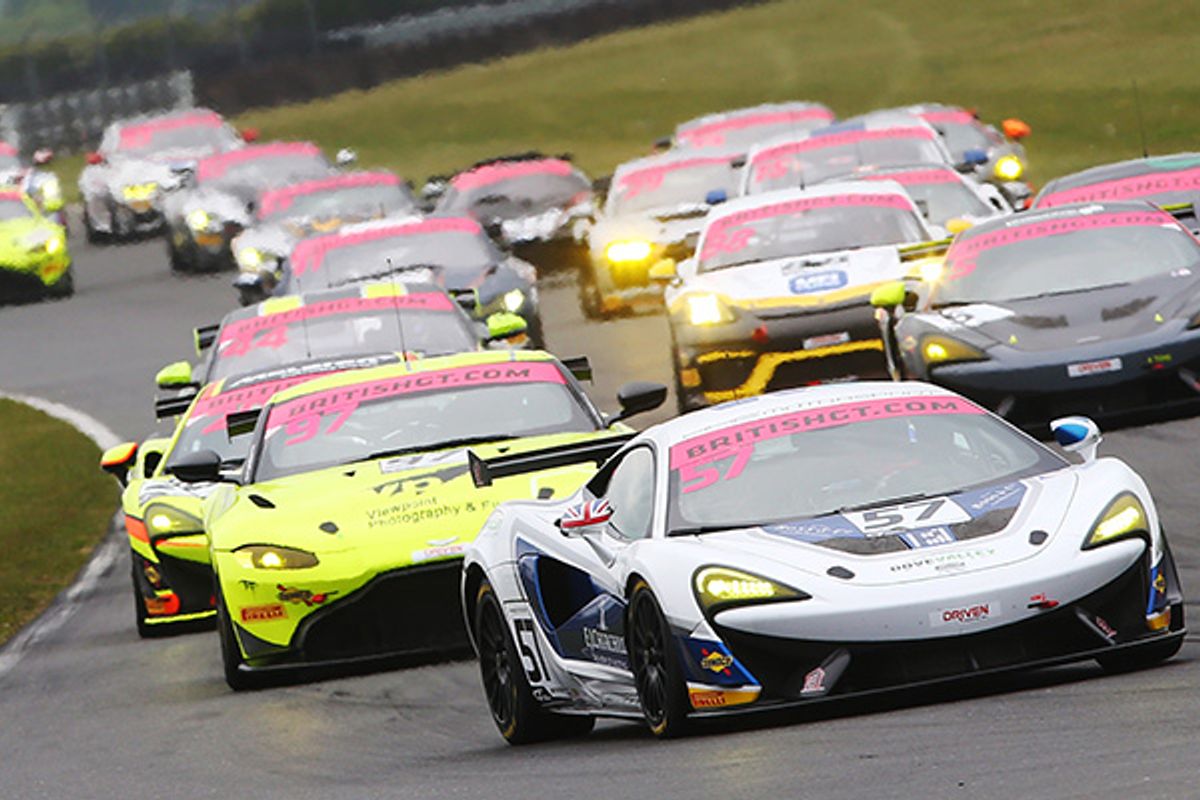 This. Is. It. The 2019 British GT Championship draws to a close this Sunday at #DoningtonDecider where just two hours of racing separates one of five GT3 crews and one of six GT4 line-ups from clinching their respective class titles. Both Teams’ Championships are also on the line along with GT4’s Pro/Am and Silver Cup crowns.

All 38 full-season entries are confirmed for 2019’s final hurrah, which also just happens to be British GT’s 300th race. To celebrate, series organisers have tracked down 14 of the rarest, quirkiest and best-loved entries from the championship’s first 299 races for a special paddock display and parade lap.

Phil Keen has never won a British GT3 championship. It’s not for a lack of trying. Indeed, he’s finished runner-up on the last three occasions. This year, as in every year since 2016, he heads to the final round with a chance to finally wrap up that elusive title.

You could argue it should already be a forgone conclusion. After all, Keen and his Barwell Motorsport co-driver Adam Balon collected 80 of the first 100 points and were 54 ahead of their now-closest rivals after Silverstone. That gap now stands at just six points, and would have been smaller without Keen’s final lap move at Brands Hatch.

Two of his previous #DoningtonDecider defeats came at the hands of Jonny Adam who has a chance to claim a record-extending fourth British GT title this weekend. You wouldn’t have bet on the Scot and his co-driver Graham Davidson after their mediocre start to the year culminated in late heartbreak at Silverstone. Nevertheless, two wins in the last three races – including at Donington in June – have thrust TF Sport’s lead Aston Martin into championship contention at exactly the right moment.

The caveat is a 20s Pitstop Success Penalty for winning last time out at Brands Hatch. By contrast, Balon and Keen will race handicap-free at a venue where the latter scored victory aboard Barwell’s Lamborghini 12 months ago.

Keen and Balon must also keep a close eye on their team-mates Sam De Haan and Jonny Cocker whose championship deficit would have been much smaller without Brands Hatch’s last lap shuffle. 11.5 points separate the two Lamborghinis ahead of Donington where the #69 Huracan secured third in June. Victory this Sunday would force Balon and Keen to finish second in order to clinch the crown.

The two remaining title protagonists have no choice but to win on Sunday. Newly-crowned Silver Cup champions Ollie Wilkinson and Bradley Ellis have already done that once this year at Spa where their Optimum Motorsport Aston Martin dominated, while Balfe Motorsport’s McLaren shared by Shaun Balfe and Rob Bell has been the fastest entry yet to win this season. The latter’s 15s Success Penalty adds a further obstacle at a circuit where the 720S finished second in June.

They’re the contenders, but what about the championship party poopers this weekend?

Well, ‘gatecrasher’ is written all over RAM Racing’s Mercedes-AMG, which is in the midst of a good race, bad race cycle that extends back to Silverstone. 10th place at Brands Hatch means Ian Loggie and Callum Macleod should be guaranteed podium finishers this weekend!

Donington also holds fond memories for Rick Parfitt Jnr and Seb Morris who won their British GT title there two years ago. But JRM’s Bentley finds itself only 11th in the standings after collecting fewer points in the last seven races than it achieved in the season opener. The duo will be eager to salvage something from a tough campaign.

There’s also TF Sport’s second Aston Martin, which Davidson and Adam are relying on to take points away from Barwell. Mark Farmer and Nicki Thiim won on the road at Donington last year before a post-race penalty dropped them to second, and will have one final chance to end a frustrating season on a high.

Equally, TF Sport are trying to overturn their 45.5-point deficit in the Teams’ Championship. Barwell need just 19 points, regardless of what their rivals manage, to reclaim a crown they last won in 2017.

The SRO abacus will be working overtime on Sunday afternoon when TF Sport’s Ash Hand and Tom Canning attempt to defend their 8.5-point advantage. 37.5 points – 0.5 more than cover the top-six – are still available during Donington’s two-hour enduro where GT4’s champions have been crowned every year since 2015.

Hand and Canning head there with both form and history in their favour. The #97 Aston Martin blanked on Oulton Park’s opening weekend but has since notched up three podiums in five outings – including victory at Spa – to build a small but crucial advantage. Indeed, no crew has ever overturned a points’ deficit at the season finale since GT4 was established in 2008.

Five pairs are desperate to change that stat this Sunday. They’re headed by Dean Macdonald and Callum Pointon – a #DoningtonDecider contender 12 months ago – who lead McLaren’s three-car assault on the 2019 title. Fastest race and qualifying laps in the last two events have marked out Macdonald as one of this year’s best GT4 drivers, while HHC Motorsport have never failed to feature in the championship finale.

However, theirs and TF Sport’s races will be hindered by respective 15s and 10s Pitstop Success Penalties for finishing second and third at Brands Hatch. And that could play into the hands of Seb Priaulx and Scott Maxwell whose post-race penalty in Kent also dropped them from first to third in the championship standings.

However, that same penalty now ensures Multimatic’s #15 Ford Mustang competes handicap-free this weekend. The duo are 12 points adrift of top spot having scored two wins this year, one of which came at Donington in June. A third this weekend would leave Hand and Canning no choice but to finish second in order to win the championship.

Tolman’s two McLaren crews are up next despite contrasting fortunes at Brands Hatch. A non-score dropped Lewis Proctor and Jordan Collard 20 points adrift of the front-runners after back-to-back mid-season podiums helped them leap into title contention. Meanwhile, team-mates James Dorlin and Josh Smith finally delivered the victory only bad luck had denied them at Spa. The #4 McLaren thus lines up 33 points behind Hand/Canning and with the full 20s Success Penalty to serve.

Kelvin Fletcher and Martin Plowman – the only GT4 crew to have scored points in all eight races – complete the list of championship contenders. However, a 37-point deficit means they must record their first-ever GT4 victories and hope others non-score in order to pull off the greatest turnaround in championship history. Instead, the Beechdean AMR duo’s primary focus will be wrapping up the Pro/Am title after establishing a 29-point lead over Graham Johnson and Michael O’Brien at Brands.

Championship contenders Canning/Hand, Macdonald/Pointon and Priaulx/Maxwell will be hoping their respective TF Sport, HHC and Multimatic team-mates can take points from others. Patrick Kibble and Josh Price have already finished on the podium this year, GT4 race winner Jordan Albert joins Ruben Del Sarte, and British GT rookies Marco Signoretti and Ashley Davies team up for the first time.

Those three two-car squads are also in Teams’ Championship contention, albeit behind Tolman Motorsport who enjoy a 29-point lead over HHC in second. 36.5 cover all four with 64.5 available for a one-two finish.

300 NOT OUT: BRITISH GT LEGENDS GATHER FOR MILESTONE EVENT

Fast forward 13027 racing laps spanning 27 seasons and the championship is preparing for its 300th race at the very same venue.

Much has changed in that time, including the name, organiser, circuits and drivers. But it’s the cars spanning myriad classes that have remained British GT’s most enduring quality. So, what better way to celebrate the championship’s milestone than by gathering some of its legendary supercars and forgotten curiosities?

14 will be on display in Donington’s main paddock this weekend, most of which will also complete a parade lap just before British GT’s season finale.

Tracking them down hasn’t been easy. Many hail from a pre-customer racing era when less stringent homologation rules meant very few racing versions were produced. Just two TVR Cerbera Speed 12s raced in British GT, while only one Harrier GT1-98 is thought to survive. Both are in attendance this weekend.

Others from British GT’s golden GT1 era are now so valuable that public displays are few and far between. That explains why the McLaren F1 GTR, Porsche 911 and Lister Storm are all missing this weekend despite SRO’s best efforts to secure them. Others, like the one-off Sintura S99 and Marcos Mantis LM600, now reside overseas.

Still, there are plenty more famous cars for fans old and new to savour this weekend.

Jason Clegg’s TVR T400R, still resplendent in its original Rollcentre Racing livery, is joined by another car made famous by Rollcentre – the Mosler MT900R – while one of only a handful of Morgan Aero 8 GTs is also in attendance along with Team Tiger’s Marcos Mantis.

The starting drivers’ minimum stint time remains the same as Brands Hatch: GT4 entries cannot pit until the 58th minute while GT3s must run until the 62nd. There is no pit window.