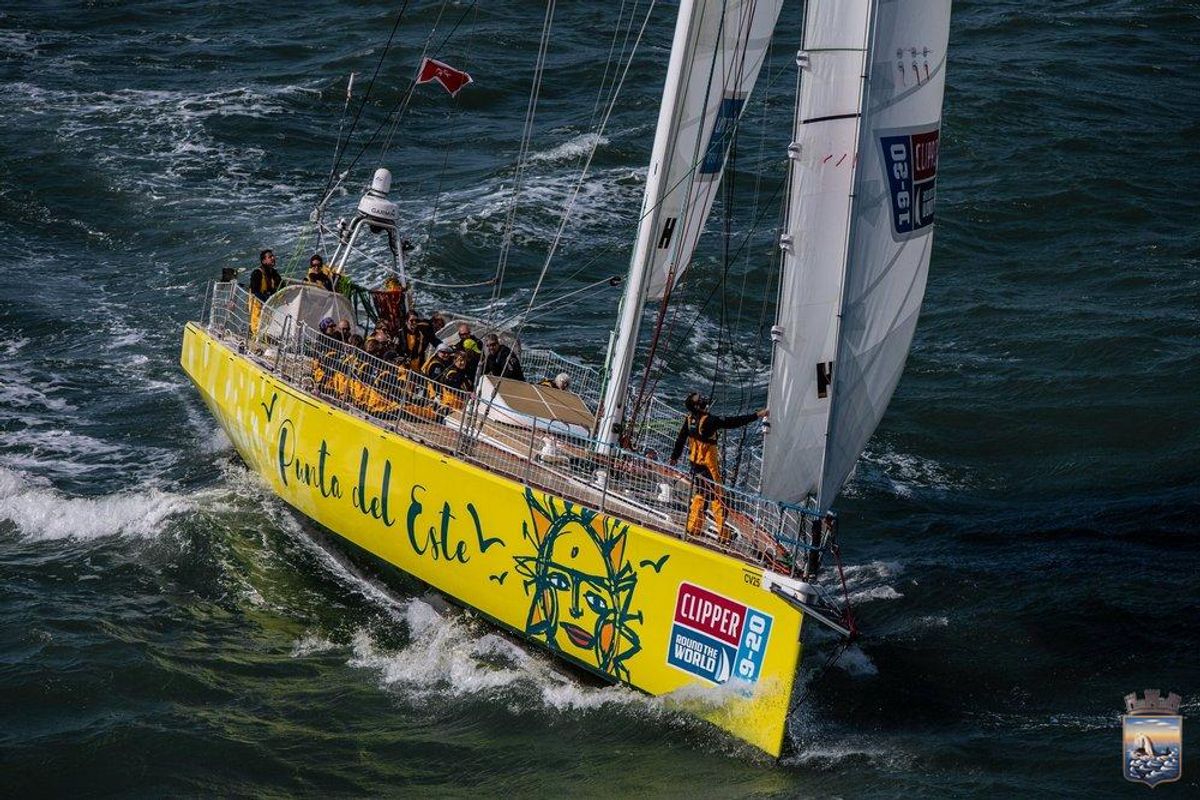 The winners of the first stage of the Clipper 2019-20 Race (Race 1) have crossed the finish line into Portimão. Punta del Este took line honours, after racing 1,200 nautical miles from London.

Dare To Lead finished in second place, with Qingdao following closely behind, crossing the line in third.

Punta del Este, skippered by Jeronimo from Spain, has a crew ranging in age from 20 to 76 years old and with 19 nationalities including Uruguay, Finland, Australia and Canada. Scooping the top spot in the first race was what every boat strived for, setting the standard for other teams to chase.

Despite only taking six days, the eleven teams in the Clipper Round the World Yacht Race have  faced tough sailing conditions. Crew had to get used to life on an angle straight away as they faced an upwind slog as they raced along the south coast of the UK. And famous for its rough and stormy conditions, the Bay of Biscay did not disappoint, especially when rounding the southern point, Cape Fisterra. Teams faced squally conditions and gusts up to 30 knots with their intensive four week training coming into its own.

Says Race Director, Mark Light, “The Clipper 2019-20 Race has got off to a great start with a fantastic first race down to Portimão. Huge congratulations go to Punta del Este, who have proven themselves to be the top guns after Race 1 with a brilliant win into Portimão – a great performance!

“During Race 1, all teams have experienced all conditions. And as the fleet entered the notorious Bay of Biscay, the downwind surfing conditions that everyone was waiting for arrived. Strong winds from behind with a following sea are the racing sailors dream. The fleet absolutely screamed down the west coast of Portugal, surfing waves and hitting speeds of up to 30 knots!!

Punta del Este Skipper Jeronimo Santos Gonzalez said: “It has been a bit of a challenging one but it feels amazing. My team has worked so hard and I am just ecstatic, just over the moon. I think the moment was when we went through Finisterre. We pushed ourselves so hard day and night, day and night. We won the Ocean Sprint and that kept us motivated and focused.”

Another team that saw success in the light conditions was Dare To Lead, who snared second place after finishing one hour and three seconds behind Punta del Este.

Dare To Lead Skipper Guy Waites said: “It was a long, long slog today. Definitely felt like the longest day of the whole week.

“It was a great effort by the team and my mate Hugues was fantastic as well. We put a huge amount of effort in for the finish and second place is very much deserved.”

Tim Harper, speaking on behalf of Dare To Lead said: “Congratulations, it’s been an amazing start to your race, despite the very steep learning curve for all teams in the first few days. This podium place, combined with your competitive spirit, challenging for the lead in Race 1, must have given you fantastic confidence in the team’s abilities, and has certainly galvanised very enthusiastic land based support.  Well done to you all. You clearly ‘Dare to Lead’”.

Despite leading for much of the race, Qingdao had to settle for third place after falling victim to the dying breeze off the southern coast of Portugal. However, although Qingdao missed out on the top spot, the team is still looking very good in the standings. As well as collecting nine race points for third, Qingdao also earned three bonus points in Race 1 after being the first team across the Scoring Gate.

Skipper Chris Brooks said: “It was epic, hard work. We tried everything we could and it was just mother nature in the end that didn’t allow it to happen. It’s great to come third, I think it is a good foundation for Qingdao to go off and win the race.

“Having been the first boat to score points in the race and now coming second overall, we just want to work on that and improve it and be first by the time we arrive in Punta del Este!”

This is the first time the Clipper Race has visited Portimão and the Algarve city has been eagerly awaiting the arrival of its fleet.

Marina Correia, Director General of Marina de Portimão welcomed the teams in announcing to the crew that a week of activities had been planned for them including wine and fish tastings, a four boat rally, museum visit and, of course a Prizegiving to remember. She said, “It is an honour for Portugal to welcome the Clipper Race. We expect seven vibrant days of activities in Portimão, where all the crew and their family and friends can taste and enjoy the sunny Algarve.

The Clipper Race teams will spend a week in Portimão. Marina de Portimao is hosting a rally on Thursday 12 September, with four Clipper Race teams racing from the city to Lagos and back.  Yachts will be visible from the shoreline along the coast, providing a spectacle for spectators to enjoy. The Clipper Race will be departing Marina de Portimão on Sunday 15 September, with a parade of sail, showing off the magnificent 70 foot racing yachts in all their glory.

The second race of the circumnavigation will see the first ocean crossing for crew. Teams will be racing 5,195 nautical miles to Host Port Punta del Este in Uruguay.