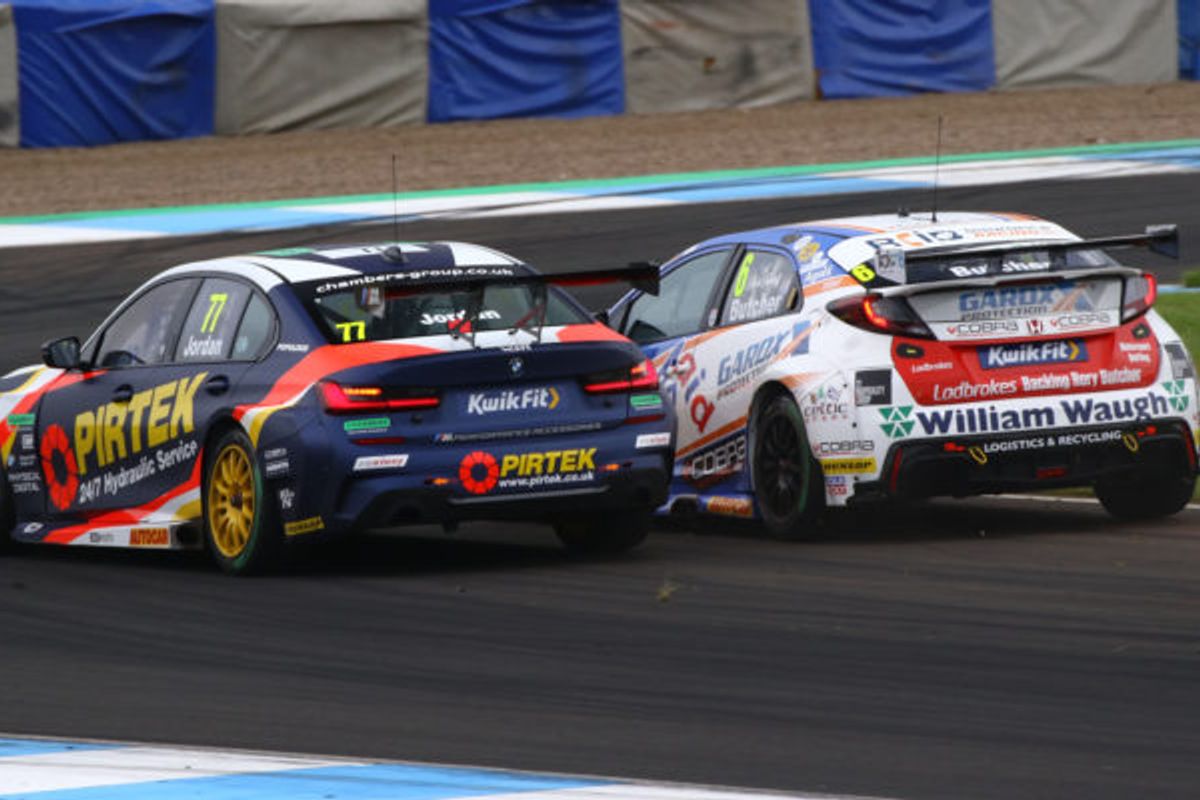 Scotsman Rory Butcher had the home crowd on its collective feet as the pole-sitter reclaimed the lead on the final lap to win the opening Kwik Fit British Touring Car Championship race at Knockhill.

The Cobra Sport AmD AutoAid/RCIB Insurance driver had fended off the attentions from BMW Pirtek Racing’s Andrew Jordan for almost the entire 27-lap contest, before the Honda Civic Type R clipped the kerbs at the final hairpin on the penultimate lap.

Butcher’s sluggish exit at the hairpin compromised his momentum up the hill and across the start/finish line as Jordan stormed around the outside to briefly claim P1 and a potentially important championship point for leading a lap.

Jordan’s joy was short lived, however, as the 3 Series carried too much speed into Duffus Dip on the final tour and the 2013 champion briefly ran off track, giving Butcher the opportunity he needed to nip back by and into the lead.

The roar from the partizan crowd could be heard above the BTCC engine noise and Butcher held firm until the finish to claim his third victory of the season.

“Andrew (Jordan) was on a mission there,” said Butcher. “The BMW’s working so well. I felt confident but I had second gear and lost a lot of time at the hairpin. I managed to make a gap through sector two which kept me safe, until that ding-dong on the last lap. I’m so happy to secure that win in front of my home crowd – it’s incredible.

“I was really struggling to get power down and he got great drive. Because he was in the middle of the road, he ran wide and I planned ahead to send it into turn three. Andrew gave me the room to get it done.

“I’m at home here. I’m still learning about the track even during that race. Everything that’s happened behind the scenes with Sam (Tordoff) is so upsetting, so it’s fantastic to do that for them.”

Despite the drama Jordan would finish the race where he started, closing the points gap to BMW stablemate Colin Turkington in the process, who himself had his own race long tussle with Dan Cammish and Tom Chilton.

Team Shredded Wheat Racing with Gallagher’s Chilton slipped by Cammish’s Honda at the hairpin on lap nine to take third, before the Surrey man threw two positions away after running wide shortly after. Cammish then had Turkington’s BMW all over the back of him for the remainder of the race, before the latter was forced to defend from the recovering Ford Focus of Chilton on lap 23.

Chilton blasted around the outside of Turkington’s 3 Series at the hairpin but the championship leader expertly squeezed his rival wide on the exit of the turn, leaving Chilton dropping further down the order.

When the dust settled it was Cammish in third from Turkington, Senna Proctor (Adrian Flux Subaru Racing), Chris Smiley (BTC Racing) and Chilton.

One short safety car period interrupted proceedings when the VWs of Bobby Thompson and Michael Crees got into eachother, and the latter then collected the unfortunate Nic Hamilton in his Ford Focus.