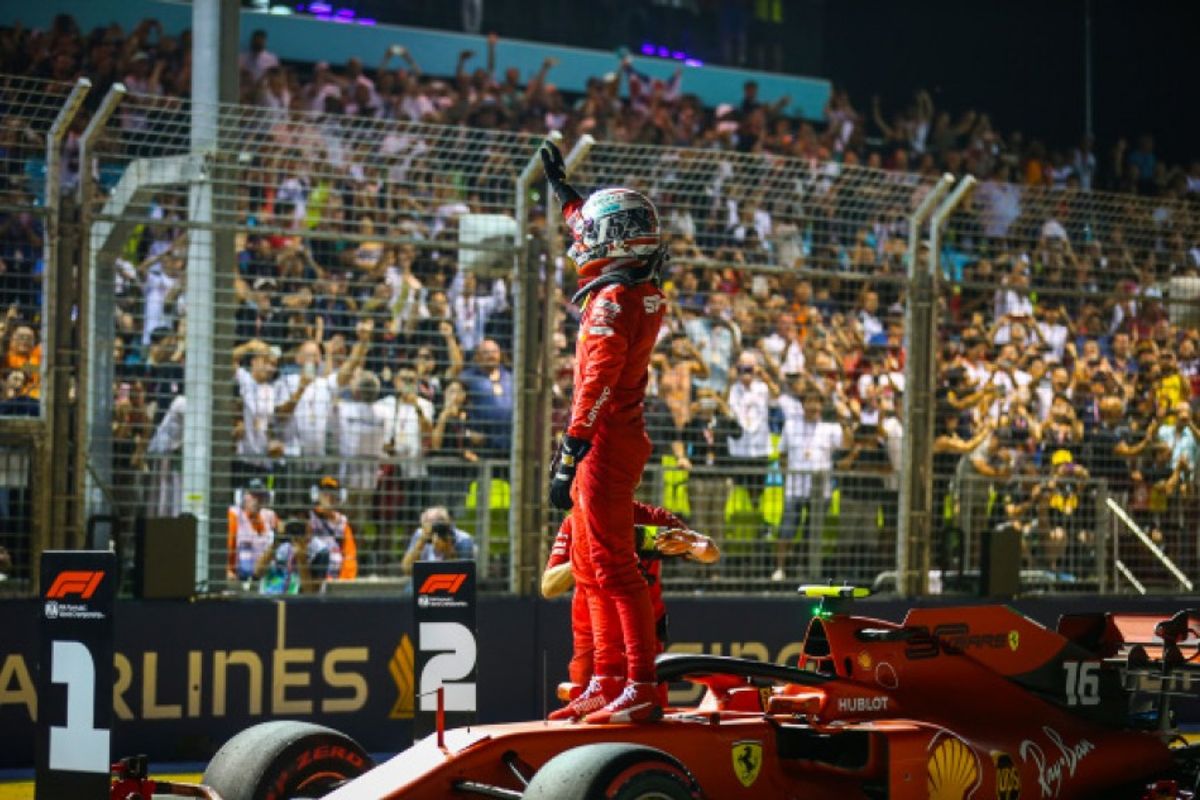 Charles Leclerc claimed his third pole position in a row and the fifth of his career with a superb final Q3 lap of the Marina Bay Street Circuit to beat championship leader Lewis Hamilton of Mercedes by two tenths of a second, with Ferrari team-mate Sebastian Vettel a further tenth of a second behind in third.

The top three then opted to remain in pit lane for the final runs. Mercedes, however, chose to send its drivers out on softs and Bottas took first place in the session with a lap of 1:37.317, 0.248s ahead of Hamilton, with Leclerc finishing third ahead of Vettel and Verstappen.

Eliminated at the end of the first session were Daniil Kvyat of Toro Rosso in P16 followed by Racing Point’s Lance Stroll, Haas’ Romain Grosjean and the Williams cars of George Russell and Robert Kubica.

In the first runs of Q2 Leclerc was again to the fore, with the Monegasque driver becoming the first man to dip below 1m37s with a lap of 1:36.930 that he then improved to 1:36.650. Vettel took second place, seven hundredths of a second behind his team-mate. Hamilton was third for Mercedes after a second run that yielded an improved time of 1:36.933. That left Verstappen in fourth place thanks to his first-run time of 1:37.089.

Bottas made it through to the final segmen in fifth, the Finn finishing ahead of Lando Norris who put in an impressive lap of 1:37.572 to bump Red Bull’s Alex Albon to sixth place. The Thai driver finished ahead of Carlos Sainz in the second McLaren and the Renaults of Daniel Ricciardo and Nico Hulkenberg.

In Q3 Vettel drew first blood with the German took top spot with a time of 1:36.437. That put him over three tenths ahead of Leclerc who set a time slower than his Q2 best and Verstappen who logged a lap of 1:36.817. The Mercedes drivers were fourth and fifth and Alex poste a time of 1:37.964 to take P6, slightly slower than his Q2 time.

However, Vettel couldn’t hold onto P1. Mistakes in the first sector saw him back out of his last lap and that allowed Leclerc to grab his fifth career pole position ahead of Hamilton.

Vettel kept hold of third place on the grid aheads of Verstappen. The Dutchman did make a small imporovement on his final lap, of three thousandths of a seconds, but it was not enough to get near the second Ferrari. Bottas again finished fifth but Albon got to within three tenths of the Finn after improving by half a second on his final run.

The Thai racer will thus start at the back of row three ahead of McLaren’s Carlos Sainz, the Renaults of Daniel Ricciardo and Hulkenberg and the second McLaren of Lando Norris.