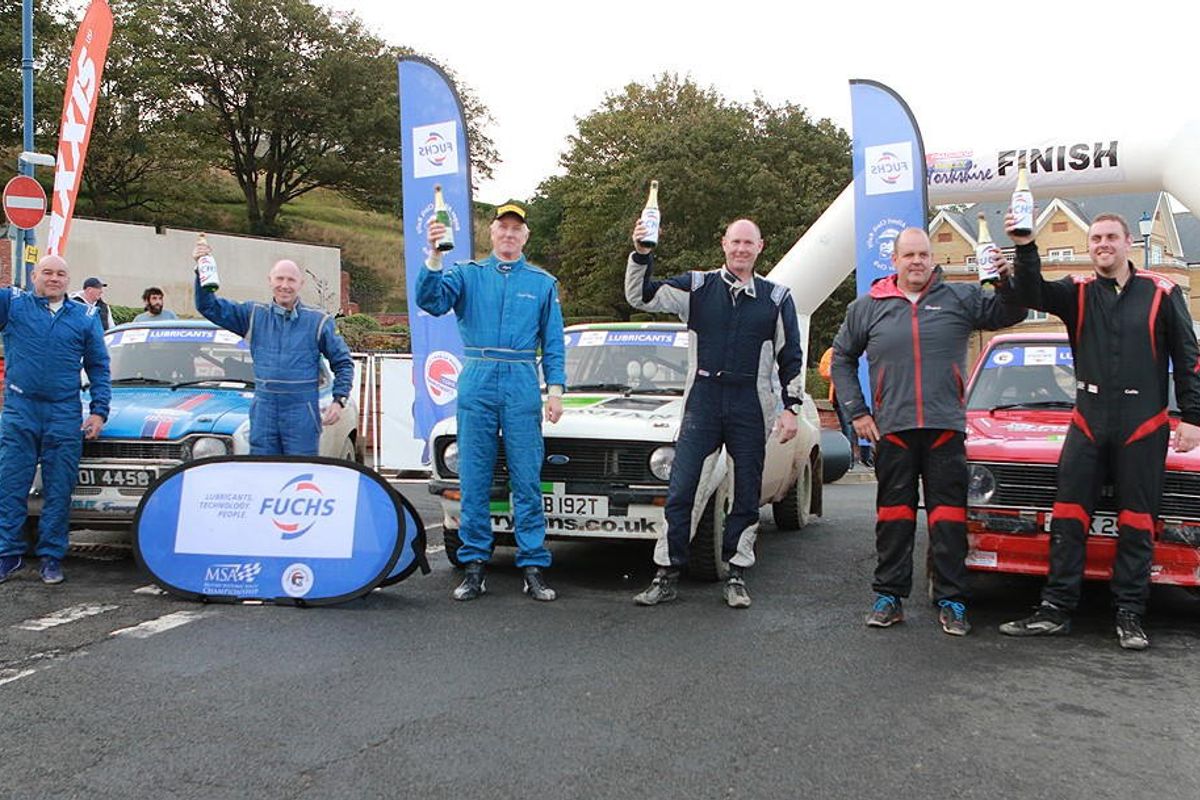 Simon Webster and Jez Rogers were confirmed as BHRC champions on Saturday afternoon (28 September) after the final round of the FUCHS LUBRICANTS Motorsport UK British Historic Rally Championship.

While Matthew Robinson and Sam Collis took back-to-back victories on the Trackrod Historic Cup, Webster and Rogers saw off the challenge of Stanley Orr and Grahame Henderson to emerge as popular overall champions after a tremendously sporting contest. “Simon’s a gentleman and he’s a very worthy champion,” said Orr.

The action opened in the darkness of Friday night with 11 miles in Dalby. On a one-off outing, so not BHRC registered, Matt Edwards and Hamish Campbell (Fiat 131) were quickest by 1.9s from Robinson. In the BHRC title contest, Orr/Henderson, on Orr’s first Yorkshire rally for 30 years, started well by taking time from Webster and Rogers.

Although Saturday dawned very wet, the weather improved and the stages started to dry. Robinson was on it from the start and went 5.8s quicker than everyone in Langdale but in Staindale it was Adrian Hetherington, on his first event in these forests, who was an impressive 3.5s faster.

As the crews headed to service in Adderstone Field, Robinson had just 1.4s on Edwards, while Hetherington and Ronan O’Neil were third, 20s back. Steve Bennett and Osian Owen were a strong fourth. Behind the non-registered Steve Bannister, Webster was sixth from Orr and if things stayed life that, Webster would be champion.

Up front, Robinson added just 2.4s in the 14 miles of Cropton and Gale Rigg, before winning the final Dalby test to secure a home ground victory for the second year running and was typically relaxed after a tremendous performance. “We’ve had a nice run round and having a Saturday off work is the best bit!”

With the rally win settled, the focus turned to the BHRC contest and Orr, now on more suitable tyres, had been quick in Cropton and Gale Rigg to overtake Webster and be 2.1s up heading into final service. However, that was not enough to snatch the title from Webster and now just one stage remained. Orr needed to finish several places ahead of Webster to have a chance of taking the title.

“This is such a nervous time: I’m listening to all the noises,” said Webster before the final stage. However, there was no late disaster and Webster took time back from Orr in the final Dalby stage to arrive at the finish in Filey over four seconds up on his rival and secure as the 2019 BHRC champion. “What a relief to get through that final stage,” he said.

After Cropton, Hetherington was a fine third, half a minute down on the two leaders. Sadly, a puncture in Gale Rigg cost the Irishman around 35s and he dropped to fifth behind Bannister and Bennett. Second BHRC finisher for Bennett was a great achievement despite a spin and a generally scrappy last stage.

In a fine eighth place overall, Josh Browne and Jane Edgington topped the Pinto-powered Escort Mk2s in class D3 despite an off that damaged the front suspension. They also won the class in the BHRC, being confirmed once rivals David Lloyd-Roberts and Dei Jones retired in Cropton with an engine bay fire.

Rory McCann and Tim Tugwell were mighty in their Hillman Avenger and topped class C2 from Stuart and Linda Cariss, while Malcolm and Ron Mounsey had one of their best runs to date to win class D2 in the Sunbeam Talbot.

Unfortunately Bob Bean and Malcolm Smithson rolled their Lotus Cortina at a chicane in Langdale on Saturday morning. Bean had trouble getting out of the car and the stage was halted but he was thankfully unharmed.

More details are at the event website: www.rallyyorkshire.co.uk
For information on FUCHS LUBRICANTS, visit: www.fuchs.com/uk