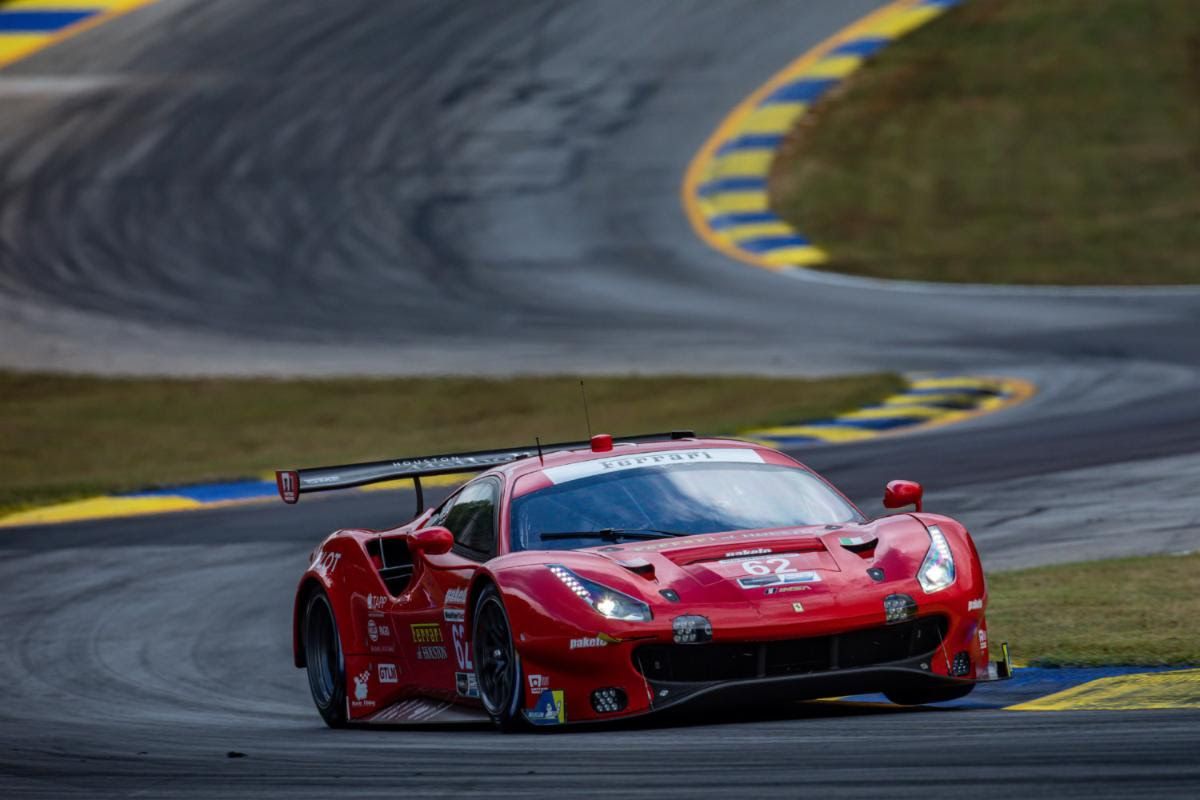 Risi Competizione's return to the 22nd annual Petit Le Mans was rewarded with the GTLM pole position in today's 15-minute qualifying session. James Calado was selected to qualify the iconic Ferrari 488 GTE Rosso Corsa Red entry and set a new track record with a time of 1:15.639 (120.889 mph) on the fifth of six laps on his way to the pole.

Calado and teammates Alessandro Pier Guidi and Daniel Serra, 24 Hours of Le Mans GTE-Pro 2019 winners, have worked diligently with the Risi team to get the Ferrari set-up thoroughly for the 10-hour Petit Le Mans race scheduled to start at 12:05 p.m. tomorrow at Road Atlanta in Braselton, Ga.

The last pole position for the Risi Competizione team came in the 2017 qualifying for Petit Le Mans when Toni Vilander put the Risi Ferrari 488 GTE in the top spot with a time of 1:17.660.

The fan favorite Risi Ferrari Team has a long history at the International Motor Sports Association (IMSA) season finale, having won the first Petit Le Mans in 1998. The Houston, Tex.-based team followed up with three additional victories in 2008, 2009, and the most recent Risi victory in 2016 with Calado, Vilander and Giancarlo Fisichella. This is Calado's first IMSA pole. The Brit's most recent pole was for this year's FIA World Endurance Championship (WEC) 4 Hours of Silverstone race in September.

The Motul Petit Le Mans 10-hour race begins on Saturday, October 12 at 12:05 p.m. after morning warm up from 9:30-9:50 a.m. Live timing and scoring is available for all on-track sessions at IMSA.com and the IMSA Smartphone app.

James Calado, driver, No. 62 Ferrari 488 GTLM:
"It's gone really well obviously. We've had a good Friday and the car is working well, which is amazing. Getting pole is obviously a great bonus for the team, just one of the last of many basically because we have a lot of laps tomorrow. We've got to stay realistic and understand what the best strategy is going to be. It's great to see an uplift in the team. You live for these moments. When you come in the pits and you see everyone cheering and happy, that's what you want to see. It's great for Risi and Giuseppe especially.

"Let's just hope we can get good results tomorrow. I think breaking a track record is always nice; the cars do get quicker every year. There's been some improvements to the circuit. It's seriously hot here and that doesn't help the tires. The lap was pretty good, and I gave it pretty much everything I had; it was really, really close but just enough. We are just going to try to do that for ten hours tomorrow."

Alessandro Pier Guidi, driver, No. 62 Ferrari 488 GTLM:
"I think everything went super well. We did a good job, including yesterday, which is surprising because not doing many races this season in IMSA put us a little behind, but we worked hard together as a team. Qualifying went well, but honestly, the car was good since the beginning. We all did really well as a team -- we improved some things, the last thing we changed this morning worked well. James did a very great job, so I'm so happy. I'm so happy to come back here and be on pole in qualifying, it is just the spot to start the weekend. Now we need to be consistent during the race down to the last hour. I'm pretty confident that the team will do a good job, also us (drivers), so let's see tomorrow in the end."

Daniel Serra, driver, No. 62 Ferrari 488 GTLM:
"It is super good to start from pole position. Of course, we still have 10 hours to go. It's a long race. In the U.S., racing is until the last minute, which is super nice. So far so good, let's see what we can do tomorrow. All three drivers seem super comfortable with the car so now we go racing."

Rick Mayer, Risi Competizione Race Engineer:
"Honestly the week has gone pretty smooth. It really helps when you have three very experienced Ferrari 488 drivers. It makes life really easy from a team and engineering standpoint because they know the car, they know the tires, they know what they can do and what they want from the car, so it's good in that regard. We've been comfortable with the car and we've made small changes with the car every session leading up to qualifying. James did excellent job and just got pole so we're happy to have that as a good start to the weekend. The track is so much quicker this year. We knew whoever got pole it would be a track record.

Tune-In Information:
The race will begin with live television coverage on the NBC Network from 12 noon for three hours then will shift to NBCSports.com and the NBC Sports App from 3:00-5:30 p.m. NBCSN will broadcast the final hours and post-race activities from 5:30-10:30 p.m. All times are Eastern. You can also listen to it live on imsa.com and RadioLeMans.com with live broadcast airing on SiriusXM Radio. The race will be streamed live in its entirety for international audiences on IMSA.tv and the IMSA Mobile App.