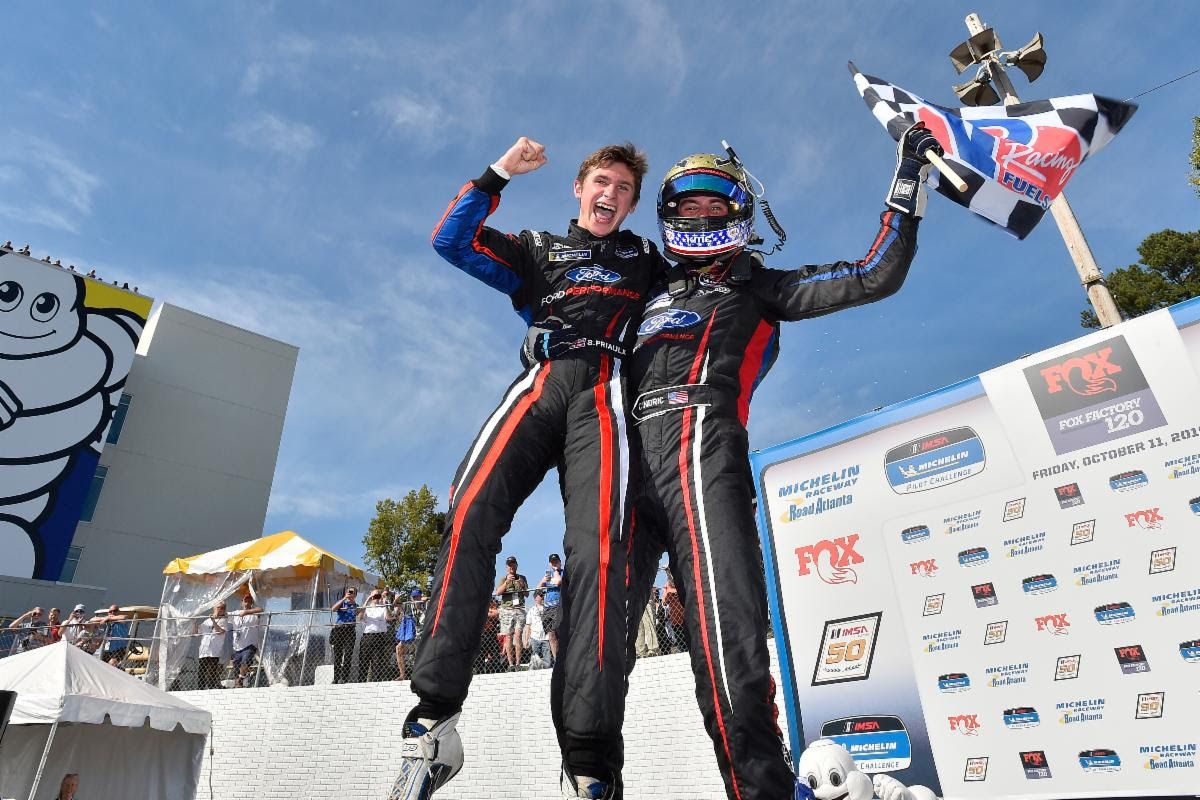 A pair of young guns took the IMSA Michelin Pilot Challenge field by storm on Friday during the series’ season finale at Michelin Raceway Road Atlanta.

Austin Cindric and Seb Priaulx paired up this weekend in Multimatic Motorsports’ No. 15 Ford Mustang GT4 entry. Michelin Raceway marked the fourth race of the Pilot Challenge season for Multimatic and the team’s first since Canadian Tire Motorsport Park in July.
Making his North American racing debut, Priaulx qualified the No. 15 Ford in second place, a remarkable feat for the 18-year-old and son of three-time World Touring Car Cup champion Andy Priaulx.

Making only his second start of the year was the younger Priaulx’s co-driver and NASCAR Xfinity driver, Austin Cindric. The 21-year-old previously competed at Daytona – finishing fifth – before recording his second career Pilot Challenge win on Friday. His involvement with IMSA has stemmed back to 2014 but after a three-year hiatus returned last season as part of the Ford Performance Development Driver program.

“I’ve had a lot of fun when Ford Performance brings over the NASCAR Xfinity guys and we get to do some of these races in the GT4 cars,” said Cindric. “Multimatic kind of kickstarted my career. It took off in a lot of different directions and I wouldn’t be where I am without them. I see the same thing with Seb. They believe in him and he’s done an awesome job.”

“Thanks to Austin, he did a great job to get the car home in first place,” added Priaulx. “It was a good race. We had good pace at the start, not to get the P1 spot but it was good enough to win the race today, so I’m really happy. Thanks to Multimatic and Ford Performance to give me a chance to race this car and with Austin.”

Finishing second place for their best finish of the season – and fourth podium finish – was Jesse Lazare and Corey Fergus in the No. 69 Motorsports In Action McLaren GT4. Third place went to the 2018 GS champions, Owen Trinkler and Hugh Plumb in the No. 46 Team TGM Mercedes-AMG GT4, who whose finish clinched the manufacturer’s championship for Mercedes-AMG.

Meanwhile, simply rolling off the starting grid and taking the green flag solidified the GS championship for the No. 39 Carbahn with Peregrine Racing Audi R8 GT4 of Tyler McQuarrie and Jeff Westphal. However, the race didn’t go as simply as planned, as the Audi made contact with another car at the start of the race and suffered toe link damage, sending the car behind the wall. The No. 39 Audi ultimately returned to the track 15 minutes later.

Despite the unfortunate luck on Friday, the Carbahn team still had smiles all around come the checkered flag. In its sophomore season, the team finished with eight top-four finishes, six of those being on the podium.

“Something like that where you look back at the season and all those great moments are what help you win a championship,” said McQuarrie. “Every single race is so important because you never know what’s going to happen.

“It’s the ultimate thank you for Jeff and I to thank the team and our ownership group. We went to them two years ago with this plan and we sold them on it. That plan was ‘Give us two years and we’ll win a championship.’ We went out there to do that. To give them that is a really good feeling.”

Capping off a Cinderella season for Bryan Herta Autosport was the team’s No. 98 Hyundai Veloster N TCR entry of Michael Lewis and Mark Wilkins.

In what was not only the maiden IMSA Michelin Pilot Challenge season for Bryan Herta Autosport, but also for Hyundai, the duo executed near to perfection all season, entering Friday’s finale at Michelin Raceway Road Atlanta with an 11-point lead in the TCR standings.

Their tally of wins for the end of the season was bolstered by one following the two-hour FOX Factory 120, as Wilkins and Lewis took their third checkered flag of the season. Lewis started second on the grid and the car remained in the top three for the majority of the race. Wilkins brought the Hyundai home just 1.313 seconds ahead of the pole-sitting No. 17 JDC-Miller Motorsports Audi RS3 LMS of Britt Casey, Jr. and Mikey Taylor.

“Today was an example of what Mark is awesome at doing,” said Lewis. “I think this last race was a really big stamp on our championship. Like ‘Hey we’re here, we’re going for the championship, but we’re going to try to win this race too.’”

“This was a massive team effort by all, that’s why we’re here,” said Wilkins. “We have a great synergy. Bryan built a great team for us and it’s just our job to do our component. It was down to the wire, it was a tough race today. We had to lean on it every single lap. This is a big one.”

Finishing third and clinching the manufacturer’s championship for Audi in the TCR class was the No. 23
FAST MD Racing Audi RS3 LMS of Nick Galante and James Vance. This was the pair’s third podium finish of the season.

The NBCSN broadcast of the FOX Factory 120 from Michelin Raceway Road Atlanta will air on Friday, October 18 at 7 p.m. ET.